Love for Music: Aren’t we getting it wrong?

I went speechless when I saw the video of some secondary school students (mostly girls in the hijab – Muslims headscarf) who came out in their hundreds to receive a Nigerian youngster, Korede Bello during his performance in the neighbouring Niger Republic, recently.

They were seen in the video, screaming and swarming around the artiste who is otherwise known as the ladies’ man as if he’s an idol of some sort. Some even went as far as shedding tears like toddlers, struggling desperately to get a ‘hug’ from him. Those who couldn’t get near, because of the crowd took pictures of the ‘exciting’ moment with their phones.

The elated singer later took to his IG page to express his feelings with a video and short caption, “I thought I surprised them but they surprised me instead…”

Efforts to get the school’s name proved abortive but apparently, it was a public school in Niamey, the nation’s capital and the largest city in Niger, where girls are allowed to use Hijab. This is a take home lesson to Lagos state government! 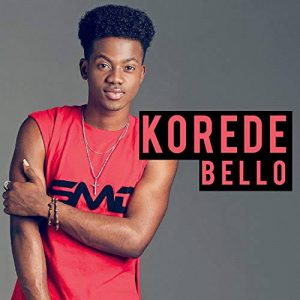 It was really disappointing to see Muslim girls in Hijab showing so much regard for a lewd musician! They weren’t even Nigerians and they recognised the ‘Na Godwin’ crooner through his songs. That’s serious! It shows the effect of music in the life of our young ones, as well as the adults.

But, on a second thought, it’s possible that they simply put on hijab without understanding its ‘rules’ and ‘implications’. Ditto for an hijab-wearing school girl who recently posted pictures of herself ‘dabbing’ a dance step popularised by another musician who goes by the name, Olamide on social media.

There was a case of a female student who hid memory card full of songs/movies inside beverages she brought from home because the school policies do not allow such. When finally caught in the act, she confessed to have collected the card from her sister, who is also addicted to music.

Examples are endless but the truth is, we live in a country where musicians are accorded much respect! Where it pays to be music stars even if you sing ‘lewd lyrics with obscene videos’ more than being a university graduate!

Sadly, if you don’t listen to music at home, the streets will provide you plenty of them, unwittingly. It’s easy to get accustomed to some lyrical lines or choruses merely by passing by music shops, who severally violate Lagos state noise pollution law with their loud speakers.

While so many Muslim schools or homes don’t see any evil in ‘secular’ music, some encourage either local ‘islamic songs of the likes of Alhaji Wasiu Sodiq’ or foreign brands of the likes of ‘Maher Zain’. Others however, permit nasheed with no melodious instrument. The latter view is considered the best, according to majority of scholars, but it takes a gradual process for a repentant soul to shun what Allah and His Messenger have forbidden.

On this note, it is pertinent for young Muslims ladies in this age of complete moral degradation and almost total collapse of morality to wear hijab. Islam has charged parents to teach their children the principles of the deen (religion) and right aqeedah (creeds) in their formative years, so as to differentiate between right and wrong.

Parents and guardians have quite an enormous role to play. Organisations too, particularly the Muslim students body must ramp up their sensitization and enlightment programmes on the proper understanding of hijab among female students, because their Hijab is an apparel of modesty.