The entertainment industry, no doubt, has a fair inclusion of Muslim players across the globe. Though they do not account for a huge proportion, few of female Muslim entertainers have used their profession and influence to defend the rights of Muslims and fight against the rising trend of Islamophobia.

From music to movies and sports, these Muslim entertainers could be found in different countries of the world.

A number of reasons have been related to female Muslim entertainers in Nigeria. This has been related to their act of avoiding anything religion; needless to say promoting the cause of Islam or speaking against Islamophobia, especially now that Muslim students in Hijab have been subjected to series of molestation in many government schools.

Some observers have identified religion to be a sensitive issue which could spark mixed reactions. It is in the light of this that most of these celebrities- Male and female, in Nigeria always avoid such religious issues for the fear of losing fame and followership. In fact, these celebs are usually uninformed of relevant issues such as that of religion in Nigeria.

Giving the rising trend of Islamopohobic attacks on Muslims, especially the Muslim girls, Muslim News finds it important to list top 10 entertainers who have been fighting against rising Islamophobia with their profession across the world. This is in a bid to inspire their Nigerian counterparts who are currently lagging behind in the race.

As we begin naming these active celebs, we call on the Nigerian entertainers not to shy away from defending the Islam they profess because Muslim ladies are disregarded in Nigeria. They need people who are influential and are of like minds to speak out and defend them in these trying times. 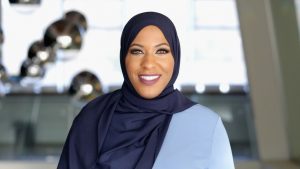 Ibtihaj Muhammad is a trailblazer in every sense of the word. Not only did she win a bronze medal in the 2016 Olympics in Rio for fencing, but she was the first Muslim woman to represent the United States while wearing a hijab. Now, with a Barbie doll modeled after her and a spot on TIME’s list of “The 100 Most Influential People” in 2016, Muhammad is hoping to use her visibility to encourage Muslim women to find a sport they love. And for her, fencing represents the perfect marriage of her athleticism and faith. Bustle caught up with Muhammad at a press event for Nike in Paris, where she revealed how faith has played a major role in her career.

“When I was playing sports […] it was tough because as a kid who wore a hijab, I was always changing the uniform, adding long sleeves, or adding pants to the uniform in order to make it adherent to my faith,” she tells Bustle. “I remember finding fencing at 12. My mom and I happened to see fencers passing a local school, and she said, ‘Whoa, these athletes are fully covered. No idea what that is, but I want you to try it.’ And that’s how I started fencing.”

Even after finding a sport that complied with her faith, Muhammad was still faced with challenges when fencing in a hijab. A lack of representation for Muslim women in the sports industry also meant not very many comfortable, suitable options for activewear. 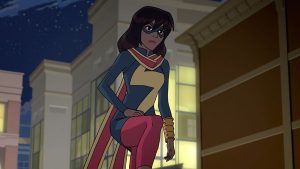 Pakistani-American teenager Kamala Khan, who moonlights as Ms. Marvel, is the first-ever Muslim superhero to get her own comic-book series. At one point, the 16-year-old even joins the ranks of the legendary Avengers. Kamala’s coming-of-age story is one that’s as unique as it is relatable: As a superhero, she uses her power to shape-shift (what she likes to call “embiggening”) to safeguard Jersey City from evil forces; as a young Muslim teen, she navigates the complexities that surround practicing her faith in a perilous world, tries to find the right balance living between two vastly different cultures, and eventually learns to be comfortable and confident in her own beautiful brown skin. “Being someone else isn’t liberating,” Kamala realizes. “It’s exhausting.”

While challenging stereotypes, Kamala’s narrative also gives young Muslim girls a hero they can relate to and see themselves in. “It’s rare to get stories about young Muslim girls. Ms. Marvel, we need you,” wrote sexual violence educator Farrah Khan on Twitter. Although we haven’t seen Kamala in the Marvel Cinematic Universe yet, there are reportedly plans to eventually bring in the Muslim superhero. 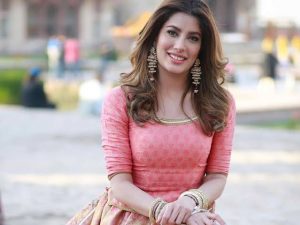 Internationally renowned Pakistani actress Mehwish Hayat recently bagged the Pride of Performance award in Norway, utilizing the platform to call out Bollywood and Hollywood for vilifying Pakistanis and Muslims as terrorists and religious extremists. Her loud and bold statement garnered the attention of various international media outlets, followed by several interviews.

Hayat vociferously spoke about how two giant entertainment industries, Bollywood and Hollywood, are deliberately portraying Muslims and Pakistanis in a negative light for decades, which has brought severe repercussions for the community.

For several years Pakistan has been putting up a relentless fight against the robust propaganda by Hollywood and Bollywood of maligning Pakistan and its citizens, as a dangerous, backward and uncivilized nation hungry for war and bloodshed.

Hayat outstretched her voice at international media outlets including CNN and Sky News after Priyanka Chopra snubbed a Pakistani girl for calling her a hypocrite. Priyanka Chopra has been supporting aggression by the Indian government despite being a global peace ambassador.

Her recent statement regarding the undue vilifying of Pakistanis made reverberations globally. Hayat engaged with international media outlets and put forth the assertions of Pakistan. Her engagements included an opinionated piece for acclaimed news outlet CNN and her interview at Sky News and BBC.

Manal Rostom, is the first-ever veiled woman to be a Nike model 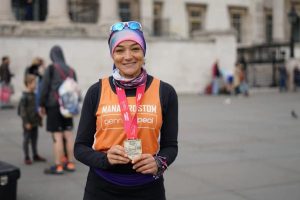 Egyptian athlete, fitness influencer, clinical pharmacist, founder of online community Surviving Hijab; Manal Rostom is without a doubt a noteworthy and hugely successful activist. Aside from her prosperous career as Nike Run Club coach and inspiring position as the (first ever) face of Nike Pro Hijab, she has:

Conquered 3 of the world’s tallest mountains, including Kilimanjaro, in aid of building Palestine’s first Paediatric Oncology Unit as well as helping towards multiple Autism charities.

Run several international marathons to raise money for Syrian refugees, the homeless in America, and planting trees across Egypt, as well as the London Marathon, in which she ran in 2019 with Penny Appeal.

Raised awareness surrounding Egypt’s pressing social issues by participating in a UNFPA – an initiative to cross Egypt by foot last year in January.

In 2014 Manal Rostom wrote to Nike to ask why none of their ads featured women who looked or dressed like her: Arab women who wear the hijab. Nike got in touch and Manal not only ended up featuring in their international advertising campaign, but also became involved in developing Nike’s Pro Hijab, a head scarf designed for veiled women who participate in sports.

But growing up Manal didn’t plan on wearing the hijab: her attitude towards covering was negative due to the stereotypes of veiled women being timid or uneducated. Manal talked about these perceptions she once held and how determined she is to change the stereotype: enter our power-house runner, mountaineer and fitness coach!

When we first meet Sana Bakkoush (played by Iman Meskini) during season one of the popular Norwegian teen drama SKAM, she makes it clear that she’s a woman who speaks her mind, however ignorant those around her prove to be. Attending a primarily atheist high school in Oslo doesn’t make things any easier for her — Sana’s a practicing Muslim who wears a hijab, but she manages to stay true to herself. Her character is incredibly fleshed out: Sana is witty, relentless, mature beyond her years, and rocks a bold lip like it’s nobody’s business.

She busts through the myth of what a good Muslim girl looks like and serves up real talk on the fact that she alone is making the decisions in her life, all while dealing with typical teen stuff, such as parties and relationships.

Zari Adrianna Tomaz (Tala Ashe) is part of the ragtag group of superheroes on the CW’s Legends of Tomorrow. The Legends first meet Zari in the dystopian future, when religion is outlawed — along with superpowers. Still, hacker-turned-hero Zari treads a fine but fierce line when she continues to stand by her beliefs without wavering, even when it means practicing her faith in secret. Eventually, she becomes the holder of the Air Totem with the ability to harness the classic element’s power.

Zari’s character was created in response to the political climate that followed the 2016 presidential election, and not just for the sake of adding a Muslim character to the show; the hero was inspired by executive producer Marc Guggenheim’s sister-in-law, who is also Muslim.

“She was talking about how difficult it is to be a Muslim-American in the current political climate,” Guggenheim said at the 2017 Television Critics Association press tour. And just like that, a trailblazing hero (who just so happens to be a Muslim woman) was born.

Leave it to Shondaland to break the glass ceiling and tackle negative stereotypes in television. Season 14 of the medical drama Grey’s Anatomy saw the casting of Sophia Taylor Ali as Dahlia Qadri, a surgical intern and Muslim woman who wears the hijab. In one episode, without thinking twice, Qadri swiftly unravels her hijab and wraps it around a young boy’s injured leg in a heroic act of compassion that ultimately saves his life. When asked why she did it, she replies, “My faith is about service and compassion.”

It was a moment that resonated with many Muslims. One fan wrote on Twitter, “She took off her hijab to save a patient, then Dr. Hunt pronounced hijab correctly. 👏🏽😭👏🏽 Let me know if y’all need a hijab stylist, I gotchu sister.” 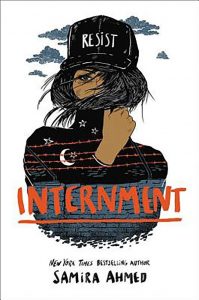 From The New York Times best-selling author Samira Ahmed comes the chilling dystopian read Internment, a novel in which the president preaches Islamophobic rhetoric and creates a divided America. Ahmed’s’s book follows Layla Amin, a 17-year-old who leads a revolution to free Muslim-Americans from internment camps that result from the political climate. But Layla isn’t afraid to raise her voice and rebel because it means her family, friends, and community can once again live safe and free. Layla’s story is as much about being able to drive change at any age as it is to find your voice.

The Spanish-language high school drama Elite features Nadia (Mina El Hammania), an ambitious hijabi Muslim teen with Palestinian parents attending one of Spain’s more elite private schools, Las Encinas, on scholarship. For Nadia, being the new girl means facing everything from mean girls to Islamophobia. On her first day of school, the principal tells Nadia she must remove her hijab or face being expelled. Nadia gives in because she hopes to receive the academy’s prestigious award reserved for the student with the top marks, but she makes it known throughout the series that she wears her hijab on her own terms. “It’s a hijab, not a headscarf,” Nadia says to one classmate. “No one makes me wear it.”