The United Nations, United States and a couple of Arab leaders have come under fire for their seeming application of double standard in handling the age-long Palestinian-Israeli conflict, just as the Israeli-Zionist air strikes offensive, which started last week, has led to the death of at least 32 Palestinians, mostly civilians, including eight members of the same family, in the besieged Gaza Strip.

While the attacks on Gaza was ongoing, the Israelis have continued to expand illegal settlements in the occupied West Bank, which constitutes continued flagrant violation of numerous UN resolutions.

Dr Ganiyah Tijani-Adenle, a Journalism Scholar from Lagos State University (LASU), Lagos, Nigeria, in an exclusive interview with Muslim News at this year’s Aqsa Day Walk For Palestine, Peace and Freedom, said the world leaders under the auspices of the United Nations have exhibited double standard in holding Israel accountable for violating the rights of the Palestinians which has gone unchecked for years.

She charged all lovers of peace to make efforts and advocate for the continuous recognition of the Palestinian state while also advising them to shun hypocrisy, double standard and fanaticism.

In her words, she said “Personally, I feel that there is definitely double standard as regards the way the United Nations relates with Israel and other countries of the world when their resolutions are not obeyed. I think, there is a universal complicity and covert support for Israel to continue the occupation and oppression of Palestinians”.

“Honestly, I don’t see how feasible there can be a two-state solution when Israel is on a daily basis continuing occupation and building new settlements in the West Bank and other Palestinian areas and territories. Gaza has been under siege for over a decade with nothing being done by the UN to pressurise Israel and lift the siege. For me, the handwriting is boldly on the wall that Israel is not interested in a two-state agreement. It’s only concerned about wiping out Palestinians from their lands”.

The varsity lecturer, told the gathering that the pathetic state of Palestinians will remain or even get worse if the United Nations, Arab leaders of Saudi Arabia, UAE, Egypt and all lovers of peace around the world including Nigerians fail to speak up against the Israeli-Zionist regime. 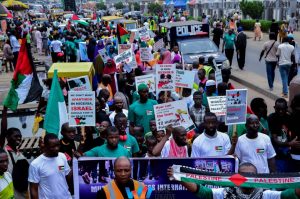 “We need to know that we are not just doing this for Palestinians but for ourselves. Because if we keep quiet in the face of oppression in Gaza, the world will keep quiet when we are also oppressed and need the world to stand up for justice and defend us when our rights are also being trampled upon.”

Speaking on the possibility of some aggrieved member-countries forming splinter group over the UN’s inability to end the unjust treatment of the Palestinians and impose sanctions on Israel, Dr Adenle said, that should be the solution but the hypocrisy of the super powers and the deafening silence of some countries makes it look like it is actually something impossible. 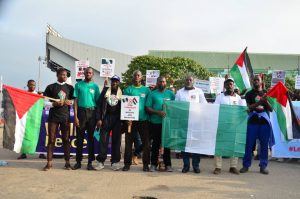 She said it may never happen, stressing that, “Today, people only talk when they have perceived vested interests in a situation but when they don’t, especially when it concerns the Muslims, and indeed the Palestinians, they always keep quiet. Even though that should actually happen, I doubt if it’s going to happen because right now, we are in a very hypocritical world and people only talk when they have interests to protect.”

How to end insecurity and banditry in Nigeria

The former journalist with the Voice of Nigeria (VON), while also speaking on ending insecurity in Nigeria, advocated for an end to fanaticism and ethnocentricism among the youth.

“If we want to end insecurity, we must preach against fanaticism and ethnocentricism. I say fanatism because whenever anything happens, we are not being realistic. We also need to be sincere with ourselves”.

“For instance, I went to an interview about illegal homes for recalcitrant and mentally challenged people. This is a Nigerian problem but some people want to ignore the fact that Christians and churches also have these “homes”. They just want to focus on it being a northern or Muslim problem”.

“Unless Nigerians are sincere and not being fanatic and ethnocentric, we aren’t going to solve the challenges of banditry and kidnapping that are happening in the North East, Niger Delta and as well as other regions of the country”.

“We need to be factual and truthful, and stop looking for opportunities to bash Islam and hang issues on the Muslims. Until we do this, we are not going to resolve this challenge, ” she butressed.

She advised the government to take responsibility for all the atrocities being committed in Nigeria, adding that, the issue of corruption even in the military and those fighting Boko Haram is repulsive.

“If people can be corrupt and put the lives of the whole Nation at stake because of their selfish interests, it shows you that we are not even sure those in authority are doing what they are supposed to do. I think we need to stop playing politics with the insurgency in the North and be realistic and know what the real problem is and be very realistic and do the needful.

“But the problem is, we are not even doing what is necessary in so many sectors like education, health and so on, and this is actually a trend that is also going into the security forces. The government needs to be responsible and stop thinking about their partisan interests or the next elections and think of serving the Nigerian people and achieving the purpose for which they were elected”, she noted.