While the tweet for the show’s trailer asks: “Who do you think he is? Watch ‘Messiah’ on Netflix” – Antichrist was the uniformed answer.

Netflix released the first trailer for its upcoming thriller Messiah last week – and inadvertently revealed a major plot twist to many Muslim viewers.

The show centres on a Christ-like man who performs miracles around the world. 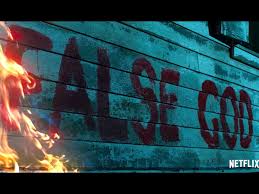 But the character’s name is a huge nod to Dajjal, a false prophet in Islamic theology comparable to the Antichrist.

Many Muslims and Arabic speakers guessed that the “messiah” was Dajjal and joked they would need to “grab a prayer mat” after watching the trailer.

What was in the trailer?

In the trailer, the main character – by Belgian actor Mehdi Dehbi – is seen performing miracles and building a huge international following.

A CIA officer investigates the elusive figure, whom she suspects of being a major global con artist. During an interrogation, the man says he was sent “by his father” to help people.

Netflix tweeted the trailer with the question: “Who do you think he is?”

Dehbi’s character isn’t named in the trailer, but he is named on Netflix’s website as Al-Masih – Arabic for “the messiah”. It is the name used for Jesus Christ in Islam, but is also the name with which Dajjal is said to announce himself.

What has the reaction been?

Quote-tweeting the trailer, user @Sultaan_Mo1 wrote “I’m getting Dajjal vibes”, before adding in another tweet: ” I bet he’ll ‘accidentally’ lose an eye .”

In Islamic theology, Dajjal is said to be blind in one eye.

READ ALSO...  Right-wing extremists, not Muslims, commit most terrorist acts in the US, new study reveals

The posts had tens of thousands of likes and retweets. Later, the same Twitter user posted screenshots appearing to show they had been blocked by both the Netflix and Messiah accounts.

Netflix has denied this, saying: “There’s no truth to this story we have not blocked fans.”

One person wrote that “Muslims figured out the twist ending of the Netflix ‘Messiah’ show because they literally named the character Dajjal”, but Netflix’s official Twitter account responded : “That’s not actually the character’s name.”

Author G Willow Wilson said it was still “heavy handed” of Netflix to call the character Al-Masih, rather than “Bob, or Abdel Halim el Helwani, or *literally* anything besides the title with which the Antichrist will announce himself”.

She added: “I get why, to an English speaker with no background in Islam or Arabic the connection between Masih and Messiah is sufficiently subtle. So perhaps to them it sounded like Bob. Yet they didn’t anticipate that everything is local on the internet.”

Another Twitter user said it was as obvious as “watching an Arabic murder mystery and there’s a character named Murder McMurderson”.

Others made jokes about needing to pray after watching the trailer and listening to the Quran on repeat on Spotify .

In Islamic eschatology, Al-Masih Ad-Dajjal is an evil false prophet whom, it is said, will come to earth and try to lure people into following Shaytan (Satan).

It is believed he will then be destroyed by Christ, or the Imam Mahdi.

In the Hadith, an Islamic holy book said to contain the teachings of Prophet Muhammad, Dajjal is described as having curly hair, one eye, and the word “kafir” – unbeliever – on his forehead.