….a year after obtaining M.A. Islamic Studies at LASU

Shaykh Sulaiman Adeyemi Yusuf, the proprietor of one of the famous Arabic schools in southwest, Nigeria, Ibadullah Islamic Schools has recorded yet another feat in academia by bagging a second Masters degree in Arabic Language at Al-Hikmah University, Ilorin, Kwara State as the institution celebrated its 9th convocation ceremonies today, Saturday.

Speaking with Muslim News, the elated scholar praised Allah for seeing him through the process, saying that the degree is dedicated to Ibadullah Institute whilst charging Muslim scholars to advance in knowledge in order to be useful to humanity.

Shaykh Adeyemi, who also holds a Masters degree in Islamic Studies from Lagos State University, noted that what prompted him to pursue another Masters degree in Arabic Language is to have a sound understanding of Islam.

“The first Masters degree I have is in Islamic Studies from Lagos State University while the second one is in Arabic language from Al-Hikmah University. The reason for that is to have a perfect understanding of both because they are two separate disciplines entirely.

The Lagos-based Islamic scholar who features on Television Continental (TVC) during his Ramadan Tafsir (exegesis of the Qur’an) revealed that he had his first degree in Islamic Law from Mauritania.

He added that though Islamic Law is a unique course on its own, it draws inspiration from the knowledge of Islamic studies and Arabic language.

READ ALSO...  Prof. Zulum is the Nigeria Muslim Personality of the Year 2019

Advising fellow Islamic scholars, the graduand said that they should not relent as knowledge is wide and the more one knows the more he becomes relevant and useful in the society.

“In the first place, I need to encourage fellow scholars because most of them have relaxed. They feel they are okay because they are with their Thanawiy certificate which is equivalent to SSCE. Though it has its own benefits, going further will assist because knowledge is wide and they have a long way to go. 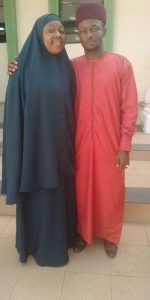 In his concluding remarks, Shaykh Adeyemi disclosed that his degree is dedicated to Ibadullah Institute, saying he has gone this higher to promote the institute. He charged his teachers and students at Ibadullah on not relenting, revealing his intention to take Ibadullah to the University level.

“I have decided to go as higher as this stage to promote my institute, Ibadullah. As I have gathered more knowledge, I will use it to promote my institute. My message to the teachers and students of Ibadullah to which I dedicate this degree is that they should not relent. My father used to tell me that he was inspired by Sheikh Abubakar Gaata not to relent.

“We want to take Ibadullah to another level. If we can secure a vast land, we are going to establish a University or College of Education. We have been trying to affiliate our institute with popular Nigerian institutions.

“We want to start awarding Diploma in our institute. We have a lot of programmes at hand. I believe with the fact that I have bagged Masters degree in both Islamic Studies and Arabic Language, I am presentable to the authority of whatever institution we wish to affiliate with,” he said.