Sheikh Kamaludeen Al-Adaby: 14 years after the demise of a great son of Ilorin

Today marks exactly fourteen years since the passage to the eternal glory of one of the most accomplished participants in the march to the greatness of Ilorin Emirate, Shaykh Muhammad Kamaldeen Habibulahi Musa Al-Adaby.

He died on Sunday(December 18, 2005) after sojourning for approximately a century (100 years) on the surface of the soil.

He is widely acknowledged as the initiator of the modernisation of the teaching of Arabic and Islamic studies into our clime.

He was also the founder of the first voluntary Muslim organisation in Northern Nigeria, the Ansarul Islam Society of Nigeria, which was founded in 1942.

The Association is one of the largest in Nigeria with functional branches across the country.His society has the highest number of schools established by any singular Muslim organisation in Ilorin Emirate.

He was acclaimed to be the longest-serving preacher and Islamic scholar of recent time.He started his career as a preacher, scholar and educationist in 1921 and ended doing so in 2005, making him have served as a prominent scholar and preacher for 84 years!

Although available records show that he did not author so many books in his very long career but it is incontrovertible that the efforts he made one way or the other had attracted many countless publications in form of books, articles and intellectually-stimulating theses in many universities and other scholarly outlets across the world.

He would also be remembered for being one of the strongest believers in the essence and services of IEDPU.He not only played great roles in the sustenance of the Union, at the initial stage, during which he allowed his school premises to host the weekly meeting of the Union as well as officiating the prayers with which the incipient national leadership of the Union was established in 1966.

Shaykh Kamal also had the record of making significant financial contributions to almost all the projects either established or sponsored by the Union.A few examples would suffice here.He was among those who offered their widow’s mite towards the building of the Ilorin United School in 1943.

His financial contribution to the building of the moribund Ilorin City Hall was also significant.Apart from being the Guest Speaker at the fund-raising and foundation laying ceremonies of the Hall, he also donated some money as well.

Besides, his contributions to the human resources development of the Emirate would remain mind-blowing.This can be seen in the number and calibre of those who were trained in the Arabic and Islamic as well as western-biased educational institutions that were established by him.

For instance, four of the products of his school, Ansarul Islam Primary School, Okekere, Ilorin, at various times, served as the National President of the Union while three of the alumni of one of the same school also served as the Secretaries to the Government of Kwara State, at one time or the other, while one made it as a Minister of the Federal Republic of Nigeria and another as a distinguished Vice-Chancellor of a frontline Federal University.

Several others, amongst the ex-pupils of the same school, were and are holding very important spiritual and chieftaincy titles in Ilorin Emirate including the soon-to-be turbaned Danmasani of Ilorin, Engr.Suleiman Oba Yahaya, FNSE.

Between 1958 and 1961, he served as a Councillor and Member of the Transition Committee of the Ilorin Native Authority.

The Committee was put in place by the then government of Northern Nigeria under Sir Ahmadu Bello following the dissolution of the Ilorin Talaka Parapo’s administration in Ilorin.

He was the Chairman of the Committee of the World Muslim League, which scrutinized the translation of the Holy Quran to the Yoruba language in the early 1970s.

He also chaired the Committee, which raised the money with which the Ilorin Central Jumaat Mosque was built and commissioned in 1981.He was so appointed in 1974 after the initial one, raised in 1964, made no significant progress.

Most importantly, he was a renowned agent of peace among the people of the community who he always counselled against division and conflict through his open-air preaching and outright interventions in the resolution of the crisis of various dimensions.

He, in fact, would be remembered as a man of peace who always enjoined pacific dispositions no matter the level and intensity of provocation.
He was similarly the most decorated religious personality of his time with the street passing through his ancestral home renamed after him as far back as 1962.

Two national awards, MFR (1963) and OFR (1981) conferred on him by the Federal Government of Nigeria. He also won the Merit Award of the Ilorin Solidarity Club in 1982.He was also conferred with the honourary doctorate degree in literature by the authorities of the University of Ilorin in 1998.

He was twice given special recognitions and awards in 1987 and 2014 by the Kwara State Government in recognition of his versatility in the human resources and general development of the State.He also won an international award from the government of the Arab Republic of Egypt in 1992 in acknowledgement of his contributions to the growth of knowledge.

He was widely respected across Nigeria and beyond. He won the friendship of Shaykh Ibrahim Nyass, who registered as a card-carrying Member of the Ansarul Islam Society in the 1960s on his visit to Ilorin. He was also closed to the late Sardauna of Sokoto and only Premier of Northern Nigeria, Sir Ahmadu Bello, KBE GCON who he accompanied on his visit to several Islamic countries in the early 1960s.

The relationship also eventuated in the establishment of the Jamatul Nasril Islam in 1964 and the release of the then General Secretary of the Ansarul Islam Society of Nigeria, Alhaji Shafi Labaeka Bello, an uncle to the late Jihadist, Dr Muhammad Olukade, to serve as the pioneer Secretary of the JNI.

He was also well respected to General Olusegun Obasanjo who wrote a moving condolence letter to his family on his death.

The late General Murtala Mohammed also cultivated his friendship as that great son of Ilorin accompanied the former Head of State to the 1975 Hajj exercise.

Other historic personalities who had high regard for him included Alhaji Shehu Shagari, the Nigerian President between 1979 and 1983; the late Chief M.K.O. Abiola, the presumed winner of 1993 annulled the presidential election and, of course, the two previous Sultans of Sokoto and Presidents-General of the Supreme Council for Islamic Affairs in Nigeria, Alhaji Abubakar(1938-1988) and Alhaji Ibrahim Dasuki (1988-1996).

He was not a Prophet without honour from home. After persevering series of denigration and condemnation from his compatriots for his attempt at revolutionising the teaching and study of Arabic and Islamic education in Ilorin and beyond and for embracing western education, the late Shaykh became a respected figure. 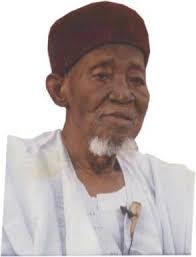 He won the penetrating admiration of the 8th Emir of Ilorin, Sheikh Abdulkadir Shuaib(1919-1959), who not only became his in-law courtesy of the marriage of a princess to one of the sons of the Shaykh, the late Brigadier-General AbdulRasheed Kamaldeen but also enrolled several Princes in his school including the incumbent District Head of Ballah, Imam Salman Olarongbe Abdulkadir.

He was also well-venerated by Shaykh Zulukarnaini Gambari Mohammed(1959-1992) who pronounced and recognized him as the “Alfa Agba” of Ilorin while his successor, Shaykh Aliyu Abdulkadir(1992-1995) also accorded him all the privileges associated with the Grand Scholar of a scholarly community.

It was the present Emir of Ilorin who sealed the series of honour conferred on the illustrious Shaykh with his appointment as the pioneer Grand Mufti of Ilorin, a year to his death.
Since his death, his contributions had also drawn several recognitions and awards, here and there, including that of the IEDPU in 2015.

In appreciation of contributions and at the instance of the Emir of Ilorin, Alhaji (Dr.) Ibrahim Sulu-Gambari, CFR, the IEDPU had to shift the plenary session of the 2005 National Conference by a day to enable the entire members of the Ilorin Emirate community and indeed that of the Union who had converged on Ilorin to participate at his Fidau, making him the first and only son of Ilorin to be so honoured so far. That was in addition to a sort of state burial he was accorded by the Kwara State Government as the Fidau prayers for the repose of his soul was given live coverage on Radio Kwara medium.

It is, however, regrettable that the proposed university named in his honour is yet to take off 14 years after his transition!

It is nevertheless important to remind all of us of the need to emulate his sterling qualities for our personal greatness and the collective progress of our community.

As we remember him and his contributions to the peace and progress of Ilorin Emirate, it is my prayers that may Allah continue to grant his gentle soul and those of other compatriots of his, who had passed on, total felicity in Al-Janah Fridaouz.

By Abubakar Imam. He is the National Publicity Secretary of the Ilorin Emirate Descendants Progressive Union