Leaders from some of the world’s most populous Muslim-majority nations set to address issues like Islamophobia, poverty.

Kuala Lumpur, Malaysia – Leaders from some of the world’s most populous Muslim-majority countries are set to meet in Malaysia’s capital on Thursday to address issues such as Islamophobia and poverty, with the organisers insisting the event is not meant to rival the Organisation of Islamic Cooperation (OIC).

According to the organisers, at least 250 foreign representatives from 52 countries and 150 Malaysian delegates will also join the KL Summit.

They include government officials, scholars and leaders from various non-government sectors.

But there are also notable absences, including the leaders of Indonesia, Saudi Arabia and Pakistan.

According to the Karachi-based Business Recorder, Pakistan’s Prime Minister Imran Khan cancelled his trip after a visit to Saudi Arabia over the weekend.

On Tuesday, Kuala Lumpur-based news website Malaysiakini reported that Khan had called Mahathir to apologise for his absence.

For his part, Iran’s Rouhani said his presence in Kuala Lumpur is part of a “pivot to the East” policy and an effort to pursue “closer ties with major Asian countries”.

Iran faces US economic sanctions, which Malaysia’s Mahathir described on Saturday as a violation of international law.

Rouhani arrived in the Malaysian capital on Tuesday.

Samsudin Osman, the summit secretary-general, said that the event, an initiative of Mahathir, seeks to produce “results” on addressing “the plight of the Muslims” around the world.

“We need something concrete … that governments who are committed to the idea can implement,” he said, adding that the event also seeks to correct “many misconceptions” about Islam as a religion.

He laughed off suggestions that the event is meant to create a new bloc that could compete with the OIC, an intergovernmental grouping of 57 countries that was established in 1969.

He said political observers are “reading too much” into the summit.

Rais Hussin, president and chief executive of the independent Malaysian think-tank Emir Research, said that the summit should be “genuine and not staged for the sake of staging it” while warning that it should not be “wrongly hijacked by nationalist-religious groups”.

In an opinion piece published in Malaysiakini on Tuesday, Hussin also urged the summit participants to offer concrete solutions to improve trade between and within Muslim countries.

He pointed out that the entire Muslim world contributes only 5 percent to global gross domestic product (GDP).

In terms of demographics, Muslims represent about a quarter of the world’s population.

As various world leaders and representatives of the Muslim world – from the North African state of Algeria to Uzbekistan in Central Asia and Brunei in the Asia Pacific region – gather in Kuala Lumpur, here are five major issues they face:

More than 730,000 Rohingya have fled Myanmar since a brutal military crackdown in western Rakhine state in August 2017, many of them now live in neighbouring Bangladesh, a majority Muslim country of 161 million people.

United Nations investigators have concluded that the Myanmar military carried out violence against the Rohingya with “genocidal intent” and that the Rohingya who remain in the country face a “serious risk of genocide”.

Myanmar has repeatedly justified the crackdown on the Rohingya as necessary to stamp out “terrorism”.

A case, brought by The Gambia on behalf of the OIC, is now pending at the International Court of Justice in The Hague.

During the trial last week, Myanmar leader Aung San Suu Kyi defended the military’s action saying the case against her country was “incomplete and misleading”.

In China’s far western region of Xinjiang, people from the Uighur minority and other ethnic Turkic Muslim groups are being held in camps that the Chinese government has described as vocational skills training centres necessary to tackle “extremism”.

The UN estimates about one million people have been detained, but Randall Schriver, the top Pentagon official for Asia, said in May the figure was “likely closer to three million citizens” in a region where the population is about 10 million.

Activists have accused China of trying to forcibly integrate Uighurs into the Han Chinese majority, pressuring them to give up tenets of their faith, such as praying and abstaining from pork and alcohol.

After first denying the camps’ existence, China has defended the policy.

In an opinion piece published on Tuesday, Charles Santiago, a member of the Malaysian Parliament for the ruling coalition, urged the leaders at the KL Summit to raise the issue.

He said that Malaysia “remains silent on the attacks” on Uighurs.

Other Muslim countries have also been criticised for their silence, including 14 members of the OIC with extensive economic ties to China.

The United States has likened China’s treatment of Uighurs to Nazi Germany’s concentration camps, but an increasingly assertive Beijing has faced limited criticism outside the West.

Since the Saudi-led invasion of Yemen in 2015, more than 100,000 people – mostly civilians – have been killed in a conflict the UN says has created the world’s worst humanitarian crisis.

According to the UN, 18 million people continue to live in hunger, and at least 12 million children are caught up in the fighting and need help.

In November, Yemen’s internationally recognised government and UAE-backed separatists signed a power-sharing deal to halt infighting, but the conflict continues as the northern part of the country remains under the control of the Houthis.

The UN’s Yemen envoy, Martin Griffiths, however, told the Security Council in late November that the number of air attacks by the Saudi-led coalition battling the Houthi rebels had dropped by nearly 80 percent in the previous two weeks.

De-escalation of hostilities is a major aspect of informal talks that have been going on between Saudi Arabia and Houthi officials since September for a possible ceasefire in Yemen.

Despite the lull in fighting, the war-torn country faces other humanitarian challenges.
In November, the International Committee of the Red Cross (ICRC) reported a new outbreak of dengue fever in Yemen, with thousands of cases and several dozen deaths. A cholera outbreak that started in late 2016 has also killed almost 4,000 people, more than half of them children.

Even as they remain active participants in the ongoing conflict, Saudi Arabia and the United Arab Emirates (UAE) are also the top UN donors in Yemen, pledging at least $500m each in February 2019.

In most developing countries, female employment is even lower, at around 25 percent. Yet, women spend two and a half times more time and effort than men on unpaid care work and household responsibilities.

These challenges are particularly pronounced in Muslim-majority countries, where approximately 65 percent of women are illiterate, compared with 40 percent of men, according to a UN study.

The UN’s Arab Human Development Report points out that in Arab countries, the high rates of gender inequality coincide with a lack of economic opportunities among women.

Female labour force participation is slightly less than 24 percent, and among young women, less than 18 percent – the lowest rate among all regions.

The share of women in GDP in the Arab region is only about 29 percent, against 50 percent in all developing countries. And the poverty rate is 31.6 percent among women, but 19 percent among men.

The World Economic Forum’s 2020 Global Gender Index reveals that 17 of the bottom 20 countries with the widest gender gaps are all Muslim countries and OIC members.

Yet it is increasingly recognised that closing the gender gap could massively boost GDP, said Maha Akeel, director of information at the OIC.

The IMF, for instance, calculates that closing gender gaps in labour markets could increase GDP in the UAE by 12 percent, and in Egypt by 34 percent.

Meanwhile, Indonesia, the country with the highest number of Muslims, is ranked 85th out of 153 countries in the report. It says of the country’s 52.6 million households, 84 percent are led by men, and the majority of women stay at home or work informally.

In neighbouring Malaysia, the gender gap is even higher with the country ranking 104th.

Melissa Akhir, head of capacity development at the Women’s Aid Organisation (WAO) in Kuala Lumpur told Al Jazeera that the area Malaysia fares most poorly in is women’s political representation, with women making up only 17 percent of members of parliament and 23 percent of the cabinet members. 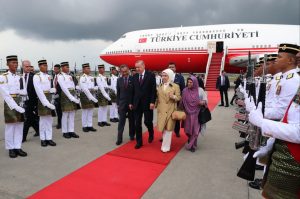 “Women’s political representation is critical to ensuring that laws and policies are gender-sensitive,” she said.

Malaysia is also lagging in incorporating into its domestic laws the UN Convention on the Elimination of Discrimination Against Women, Akhir added.

While a few countries in the Middle East enjoy the highest per capita incomes in the world, with the oil and gas-rich Qatar at the top of the list, another OIC-member country, Niger, stands in the world’s bottom three poorest countries.

In a 2018 report, the Arab Weekly quoted the World Inequality Lab as saying that the Middle East is the leading region in economic inequality.

The report said that the share of income accruing to the top 10 percent and 1 percent of the population in the Middle East exceeded 60 percent and 25 percent, respectively, of total regional income in 2016.

“Income inequality within Middle Eastern countries is more the result of entrenched elites – many of whom are from families that amassed wealth before independence – and a history of failed economic policies, including poorly managed, or non-existent, income tax systems,” Mark Habeeb, an adjunct professor at Georgetown University in Washington, DC, wrote.

In Lebanon, for example, the top 10 percent of the population earns 23.4 percent of the nation’s income; in Egypt, 19.1 percent of national income accrues to the top 1 percent – a higher rate than in oil-rich Kuwait, which is 17.7 percent.

Meanwhile in Malaysia, a 2018 report published by The Star newspaper said that the gap in real average income between the top 20 percent households and the middle 40 percent and bottom 40 percent almost doubled between 2008 and 2018.

Source: Aljazeera / with additional reporting by Ted Regencia and research by Manar al-Adam in Kuala Lumpur