The moment we have been waiting for is here. Muslim News, Nigeria’s most authoritative Islamic newspaper hereby announces Professor Fatima Batul Mukhtar, the current Vice Chancellor, Federal University, Duste as the fifth (5th) in the list of the top 5 Nigerian Muslim Personalities of the year 2019.

Fondly called Mama FUD by lovers and admirers within and outside the university community, she is one of the powerful Muslim women breaking the barriers inhibiting girl-child education especially in the north-western region of Nigeria. Against all odds, not just as a respected Muslimah, Prof. Fatima broke the gender stereotypes in education and rose to become the first female Vice-Chancellor in the north-west geopolitical zone of Nigeria.

To be precise, on February 14, 2016, Prof. Fatima was appointed by the Buhari-led Federal Government as the Vice Chancellor of Federal University, Dutse and took over the mantle of leadership of the nine year old institution. Four years later, the Professor of Botany with plant physiology as her area of specialisation  transformed and changed the public perception and narrative about the institution, lifting it to an enviable status and distinguished alma mater for all students across tribal and religious backgrounds.

In addition, she has been involved in extensive Dawah activities in the North through many Muslim organisations such as Federation of Muslim Women Association in Nigeria (FOMWAN), Muslim Sisters’ Organisation (MSO), to mention but a few. From multiple sources, Muslim News learnt that, under Professor Mukhtar’s leadership of MSO, the society’s Newsletter was reactivated and transformed to a Magazine format and were made available at their programmes especially camps and conferences. She is also one of the patrons of Muslim Corps Members Association of Nigeria (MCAN).

Many former students and colleagues especially at the Bayero University (BUK) would not easily forget how inspirational she was for many Muslim women who are today doing well academically and Islamically for themselves. Prof. Fatima Mukhtar is indeed engaging in one of the most rewarding professions according to Islam.

Under her tutelage, many have been delivered from the shackles of ignorance that could affect the society in no little way. Interestingly, she is proudly a product of MSSN along with her husband, Barrister Muzammil Hanga, a lawyer by profession who is also an active member of ‘Inuwar Jama’ar Kano’ and he is a leading advocate for positive social change in various voluntary organisations especially those associated with Islam.

Personalities like Prof. Fatima Mukhtar deserve to be honoured and celebrated for their achievements in both mundane (academic) and religious (Islamic) lives through which they have been able to transform the society positively, promote Islamic affairs and particularly serve as an inspiration for thousands of Muslim ladies in Nigeria and beyond.

She then proceeded to Government Girls College, Dala, Kano, where she obtained the West African School Certificate (WASC) in 1980. She proceeded to Ahmadu Bello University, Zaria where she graduated with a degree in Botany in 1984.

She undertook her National Youths Service Corps at Forestry Division, Ministry of Agriculture, Kano State. She did her master’s degree at Bayero University, Kano in 1994 and afterward got employment with the same University in the Department of Biological Sciences.

She immediately enrolled for a Ph.D. program in Botany (plant physiology) which she completed in 2005. The research work was done at the International Institute for Tropical Agriculture, Kano Station.

Her Ph.D. thesis was one of the three selected by the University and entered into a national competition where it scored 5th position. She also has a certificate in Agricultural biotechnology following a short course at Michigan State University, USA in 2012.

Professor Fatima Batul Mukhtar started working with B.U.K in 1994 as an assistant lecturer and through hard work, she rose through the ranks to become a Senior lecturer in 2003, Associate Professor in 2007 and Professor in 2010. She has taught several courses and supervised many undergraduate students.

Professor Fatima Batul Mukhtar has held several academic positions in the University as a member of various faculty and departmental committees, remedial and undergraduate level coordinator from 2001 to 2002.

She was also a post-graduate level coordinator from 2002 to 2008. She served as Head of the Plant Science Department from 2012 to 2013. She is an editor to many journals and has participated in accrediting the academic programs of some tertiary institutions in the country.

She has been an external examiner for undergraduate and postgraduate programs in some Universities. She has also assessed candidates for promotion to the post of Associate professor. She was honored with two awards by her students.

In 2013 Fatima Batul Mukhtar was released on leave of absence to a newly established university, Northwest University (now Yusuf Maitama Sule University), to establish the Faculty of Science as the pioneer dean.

She is a member of the Senate and Governing Council of NWU, Kano. She was in 2015 searched for the post of Vice-Chancellor of Northwest University, Kano.

In 2015, Professor Fatima Batul Mukhtar was appointed the pioneer Deputy Vice-Chancellor, Northwest University, Kano. Since then she has chaired ICT Committee, Hospital Revolving Fund Committee, and Budget Monitoring and Performance Committee. She was appointed Vice-Chancellor Federal University, Dutse on 14th February 2016. She assumed duties as the second substantive Chief Executive of the university precisely on February 16, 2016. 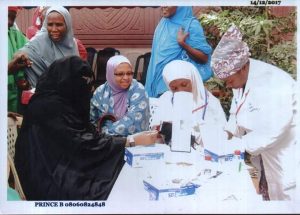 Professor Fatima Batul Mukhtar
At the state level, she served in many committees including technical and implementation committees for the establishment of Northwest University, Kano (NWU, Kano). She also served in Kano State political transition committee in 2015 and was appointed a member of the Kano State Education Promotion Committee in the same year. At the National level, Professor Fatima has served as a resource person to the National Board for Technical Education (NBTE) for the accreditation of Polytechnics and Colleges of Education in the Country.

Professor Fatima Batul Mukhtar is a distinguished researcher with more than 50 peer-reviewed journal articles, some newspaper articles, and has authored 3 books; An Introduction to Biostatistics, Experimental Research Methodology, and Data Analysis in the Life Sciences and Careers in Botany. She has also co-edited 1. She has supervised and co-supervised more than 30 postgraduate students at the masters’ and Ph.D. levels. She has attended many conferences both local and international and presented papers and posters. Professor Fatima has organized scientific conferences and workshops at various times.

Professor Fatima Batul Mukhtar founded and established the Kano Botanic Garden single-handedly in 2008. The Garden is mainly for the conservation of indigenous plants, education, public enlightenment, and leisure. Read more about her HERE