▪︎ Says Hijab is her identity

Nihmatallah (or Ny’ma) Akashat-Zibiri is a Lawyer, Wife, Mom and one of the beautiful faces on the popular daytime show “Your View”. The graduate of Law from the Lagos State University; stands out daily with her Hijab on our screen, reflecting the beauty of inclusion and showing us that the hijab is not a hindrance in any way to women fulfilling their God-given purpose.

She shares her inspiring story and the challenges of being an influential figure in this interview.

Nothing prepared me for this career path. This is because I didn’t plan to be a tv host. However, I had always been opinionated and my expressions accommodated by my dad especially. This gave me an edge at my very first audition. I had something to say about all the topics I was thrown because I had been encouraged to have an opinion about everything. I watched Your view from the beginning and hoped they will consider having a Muslim cohost. So I will say, I was inspired because I was a Muslim and Islam was not being represented well at the time I joined.

My hijab is my identity. Without it, I cannot appear in public among nonfamily members. It is a religious covering, yes, but for me, it’s about functionality. Also part of the program setting is to have women from different cultures and beliefs on a show. We are glad to reflect that and show the world that every woman regardless of their ethnic background and religions counts.

Yes, I am still practicing law. I am now managing partner cynosure practice barristers and solicitors. A law firm I co-founded in 2016. Being a wife, Mom, Tv Host and managing it all
It is the grace of God and the setting of the right priorities. Family first and most pressing career need next. It doesn’t matter whether it’s the show or the firm. I have a support system also to help with my children and a very supportive husband.

The life of the Prophet Muhammad (peace be upon him) is my inspiration. Even though he was a great leader he related and was touched by the ordinary people. I made it my model and it’s worked for me. I am inspired by the real success stories of ordinary people.

Your View has made me very influential but not yet rich however it gives the impression that am both rich and influential. This has made a lot of people come to me for help with every single kind of problem. In fact, my pro bono cases are more than I can take. This is a major challenge for me. I am constantly, trying to say no. It’s very hard to explain to people that your job isn’t proportional to your bank account.

A few times I have felt like giving up. Especially, when it concerns family. However, I am patient with the situation and find the will to continue again.

Being a Woman of Rubies

I think that will be the fact that I am resilient. I am a fighter. I don’t give up.

My advice to aspiring Muslim tv host. Trust yourself and be unapologetically Muslim. You can achieve that by acquiring a balanced knowledge of your religion and any other discipline of your choice. The confidence comes from the knowledge and the acceptance of your way of life which is Islam. Sell your religion wherever you go by being an ambassador of Islam. 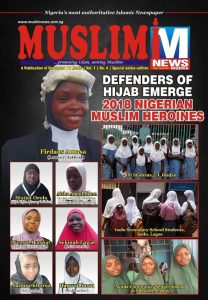 I have lost count of the series of episodes and trust me, every episode is epic. However, the most recent I can remember was the tank farms of November 6, 2019 where we discussed the challenges of Ijegun community and its environs. The Ijegun satellite town continued to be an environmental damage and the activities of tanker drivers continue to destroy infrastructure, especially roads within the area.

All episodes come with their own challenges but one that came to mind, in recent years, was the edition that featured Comedienne Princess. It was aired on on the 9th of January, 2020.

We discussed the reaction of a wife to cheating. I agreed with her that some people react out of proportion but I feared that the reality of the Muslim which is not accommodating of the various obscene examples of cheating was what she had as reality. I also feared that the foundation of new culture was also being set by that conversation and I will also be responsible for popularizing what people still feel ashamed of being caught at. There is no excuse for cheating and other obscenities in her examples.

... with additional information from The Guardian