Analysis: How the Nigerian media underreported Nathaniel Samuel’s attempt to bomb a Church

There is a near zero reportage of the botched suicide attack on Sunday at the Living Faith Church, also known as Winners Chapel, Sabon Tasha in Chikun Local Government Area of Kaduna State. The situation was almost same in virtually all the major newspapers in Nigeria today, Monday, February 3, 2020.

For a country facing a perennial insurgency, it is sad to have a print media industry that relishes the generous mention of concocted anti-Muslim terror-related attacks under the guise of a phantom ‘Islamisation agenda’ (whatever that contraption means to its claimants and  promoters). 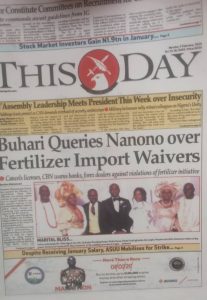 It is indeed most unfortunate to witness a phenomenon that smacks of criminal conspiracy and silence, with virtually all the major newspapers in Nigeria, choosing to ignore probably the biggest news story of the day – “Police arrests Suicide Bomber, Nathaniel Samuel in failed attempt to blow-up Living Faith Church”, as reported by this medium few minutes after the News broke yesterday.

Four out of the top seven Nigerian newspapers that didn’t give the news any mention on their respective cover pages are The Nation, Vanguard, ThisDay, and Daily Sun (though Daily Sun buried it as a rider with ‘just bomb scare’). While two – The Punch and The Guardian barely mentioned it on top and below their nameplate/masthead respectively without revealing the identity of the suicide bomber who was identified as Nathaniel Samuel by the Kaduna State Police Public Relations Officer, DSP Yakubu Sabo. 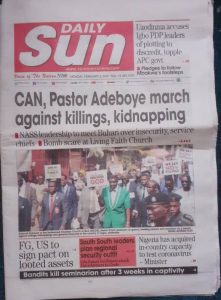 Rather than expose his criminality with a massive cover mention as done by Daily Trust – the last of the ‘top 7′ newspapers, who flaunted the wicked face of the Christian bomber on its cover page, the remaining media outfit chose to give generous mention to other news which might be based on their personal or paymasters’ interest.

Those who flaunted the pictures of Pastor Adeboye and other Christian leaders on their covers (The Punch, Guardian, The Nation, Vanguard, Daily Sun) for protesting the ‘killing of Christians’ by the Boko Haram and the state of insecurity in the country should have found it interesting and newsworthy that a fellow Christian was apprehended while attempting to bomb a church in a Muslim majority state. 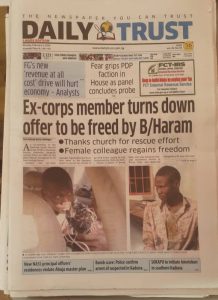 In fact, many journalists and media owners truly believe in the narratives that Christians are the victims. Igbo Akeregha, a member of the Nigerian Guild of Editors (NGE) and Abuja Bureau Chief of The Guardian Newspaper said this  morning on AIT’s Kakaaki Newspaper Review that, “As we speak, Christians in this country have been pushed to the wall. Whether we like it or not, that is the position…and the killing of Christians isn’t a religious war. When you say a religious war, it means both Muslims and Christians are fighting but as it is, it is one side against the other. There is a clear agenda to wipe out Christians from this country.”

One can only but imagine what the nature of the headlines would have been on the front pages of the aforementioned Nigerian newspapers today had the suicide bomber, Nathaniel  Samuel succeeded in his terrorist activity. For us at Muslim News, it is another testament of the culpability of a section of the mainstream media in the security challenges facing the country. 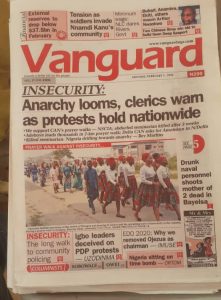 These newspapers and their gullible but equally sentimental readers with jaundiced notion have *wittingly or wittingly* lent themselves as a divisive instrument in the hands of those who see the existence of one united Nigeria as an existential threat to their hidden agenda, and to those who are surreptitiously working to put an end to our existence as a nation.

Perhaps, this is why a public commentator and a social media influencer, Adejare Ibrahim wrote:

“Now, some religious bigots have found their voice. The suicide bomber, according to their warped thoughts, is Nasiru, not Nathaniel Samuel again. Some were even beclouded by their jaundiced sentiment to the extent of saying the guy is neither a Christian nor a Muslim. How they got all these facts remains a mystery that needs to be unraveled. 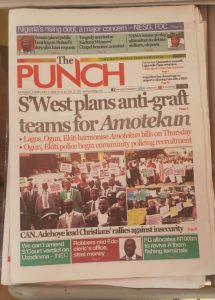 “This is the real bane of our common development as a nation. We try to cover faeces (shit) with our mouth or barehand, no matter how smelly or putrid it appears. Must we always lose our sense of reasoning to religion! This is damn too bad.

“The Police Authority, through a Deputy Superintendent of Police, made an official statement and Channels TV reported the case: they mentioned the guy’s name as Nathaniel Samuel. Yet, some people are making satanic efforts to shield the criminal by trying to change the narrative. 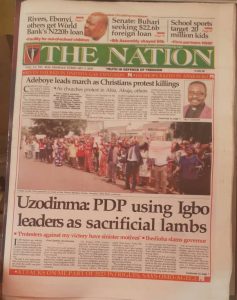 “What, exactly, is wrong with us as a people? What is our aim on this unsolicited defence of a suspected murderer? Is it because he is a Christian or what? What sort of attempt are you trying to make? To show us that a Christian can never be a terrorist, suicide bomber, criminal or a murderer?

“The naked fact is that criminality is not peculiar to a particular religion or ethnic group. As we have terrorists among Muslims, so also we have them among Christians. There are Christian murderers, kidnappers, thieves, pilferers, ritualists, armed robbers. Also, we have all of them among Muslims! 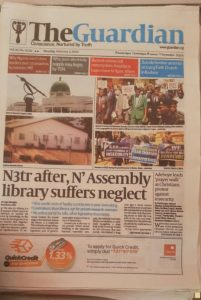 “You can argue till Jesus comes; that does not obliterate the truth”, he concluded

We leave history, posterity and God to be the Judge of all these newspapers with their divisive agenda.