Islam would have been blamed, if this Christian had bombed Church, Muslims react to Nathaniel Samuel’s attempt to blow-up Winners Chapel

Torrents of condemnation continued to pour in from the Nigerian Muslims who have been reacting to the news of a would-be Christian suicide bomber, Nathaniel Samuel since his arrest by the Police.

He was arrested in the church’s toilet after he was exposed by the CCTV cameras, according to police report. 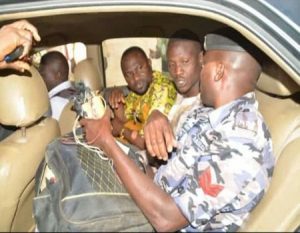 Although police has launched investigations into the case, Nigerian Muslims are happy that the man didn’t succeed in his nefarious attack on the Church, which they believe would have been blamed on Islam or the Muslims.

According to Mustafa Babatunde, “If the guy (Nathaniel Samuel) arrested had a Muslim name, the headline would have been different! Islam and Muslims would have been at the receiving end of several vitroilic attacks and condemnation from all these agents of Illuminati.

Yusuf Chinedozi Nwo also shared the same sentiment when he noted that, “This is Nathaniel Samuel, he was arrested today in Living Faith Church, Sabon Tasha, Kaduna with an explosive device. If he had succeeded in carrying out his nefarious act, he would have left no one in doubt as to who did it. Of course, the Muslims”.

He accused the press of criminal silence duplicity and looking the other way in reporting the incident, stressing that the incident has beaten their stereotyped and jaundiced journalism.

“If we continue to live in denial of this crystal-clear fact, we all stand to lose and posterity will judge us harshly. If the Press plays her role responsibly in this regard, these enemies of our nation might perhaps beat a retreat. But where they persist in their profiling and sensational reportage, they would have succeeded in joining forces with the enemies of our fatherland. Too bad”. 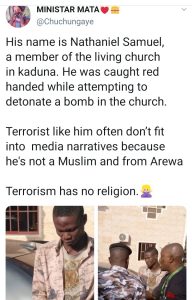 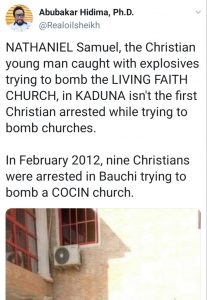 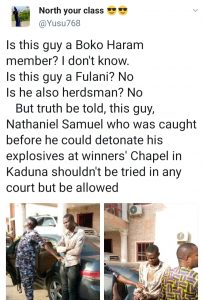 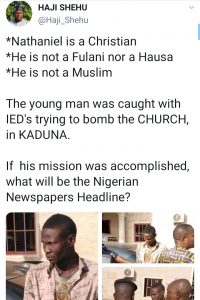