Who did the best act of charity during the just concluded 2020 World Hijab Day? [ See pictures inside]

The 2020 World Hijab Day has come and gone. However, many Muslim faithfuls are still basking in the euphoria of the event and continue to relish the exciting moments of the Solidarity Walk.

Pictures and videos of the World Hijab Day 2020 with the theme, ‘Unity in Diversity’ have hit the airwaves, showing mammoth procession, estimated to be over 10, 000 people, walking peacefully from Maryland to the Abiola Garden, opposite the Gani Fawehinmi Freedom Park, in Lagos, Nigeria’s commercial capital. 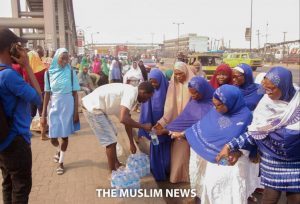 Muslim News can authoritatively report that it was one of the most peaceful and orderly processions in the world in recent time.

The conveners, the Coalition of Muslim Organisations noted that the participants filed in two rows, as they walked beside the road ensuring free and unhindered flow of traffic along the boisterous Ikorodu road.

As the mammoth crowd was about approaching Ojota, an interesting incident happened! Muslim News correspondents captured the pictures of a good samaritan, whose physical appearance gave him away as a/an street urchin/’area boy’ as is commonly called in local parlance. 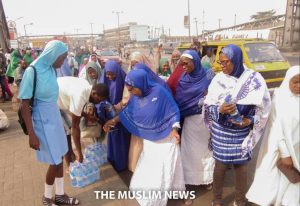 The man may have imagined that the participants of the walk might be tired and thirsty, thereby ordered one of his lieutenants or boys to get them dozens of bottled water which were shared among the Hijab rights advocates.

A cursory observation by Muslim News’ correspondent at the scene showed that the man gave out free packs of table water numbering between 20 and 30.

The ‘cheerful giver’ also ordered packs of non-alcoholic plastic bottled drink (name withheld) which were distributed among the pedestrians and ensured that the drinks got to everyone participating in the Solidarity Walk. 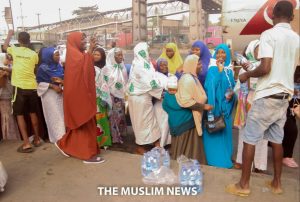 Muslim News considers this act intriguing and challenging going by the personality the good samaritan who might easily have been misjudged by the people for being a ‘tout’ going by his appearance.

He found it worthy to offer free water to the female Muslims who were embarking on Jihad (striving in the path of Allah) to demand for their divine and constitutional rights.

We therefore conclude that it is the best act of charity witnessed or carried out during the just concluded Solidarity Walk in commemoration of the 2020 World Hijab Day. 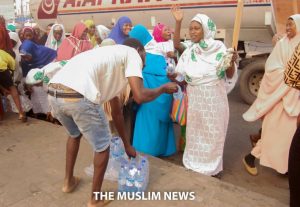 Our conclusion is based on a Prophetic narration reported by Abu Dawud in his Musnad. ‘The Messenger of Allah (SAW) was asked, “Which charity is best?” He replied, “[Providing] water”’. [Abu Dawud].

On this note, we at Muslim News celebrate this exemplary act and urge members of the public to emulate this ‘unsung hero’ by giving out to the needy from what Allah has blessed us with. 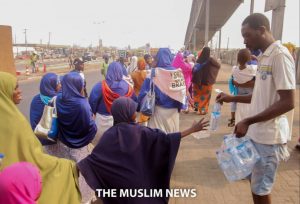