A former member of the House of Representatives and one time national president of the Nigerian Union of Journalists (NUJ), Honourable Sani Zarro hosted the Muslim News Nigeria crew led by its publisher, Rasheed Abubakar at his Garki, Abuja office early this week, where he spoke exclusively on the age long Nigerian media deliberate misinformation about Islam.

Hon. Zorro, who is an indigene of Jigawa state, revealed how the non-Muslim journalists have politicised the newsrooms in favour of their religion over Islam. He also described the now rested Concord newspaper, founded by the late MKO Abiola, as a game changer that survived without adverts from alcohol and cigarette companies.

In the interview that lasted 2 hours, the passionate Muslim pen-pusher expressed his strong belief that Muslim News, Nigeria’s most authoritative Islamic newspaper, as a specialised media, will help in overcoming misrepresentation if it is supported by the Muslims.

MN: Do you believe the claims among the Nigerian Muslims that the media isn’t fair to them and their religion?

Thank you very much for coming, and, first of all, I am very happy that you have found it absolutely necessary to come up with this specialised medium that centres around reporting Islam and Muslims. Absolutely, it is a Jihad to come up with a medium that will explain Islam to Nigerian Muslims as well as non-Muslims. Why I said it is a Jihad is because Islam is being deliberately misrepresented in Nigeria and all part of the world. Islam is being projected as a religion of terror, horror and an ideology that promotes violence. This narrative has unfortunately turned to the worse for islam which used to be the fastest growing religion especially in the 1990s. This was attested to by many media organisations including the British Broadcasting Cooperation (BBC).

Sometimes in the late 1990s, I consulted for BBC on a particular programme which they came to propagate in Nigeria and it was titled ‘Islam: the Fastest Growing Religion in the World.’ That is why I said it is documented that sometime in the last part of the 20th century, Islam was really on the rise.

Even now, with all the deliberate blackmail and misguided information about Islam as an ideology of violence, Islam has been received very well in many Western countries. Also, in this part of the country, I read about how a couple is planning a public Islamic Islamic Nikaah in Owerri, which may as well be the very first Islamic marriage that involves an Igbo Muslim girl and a boy. So, we are very fine, happy and confident of Islam, despite their misrepresentations. Alhamdulillah. 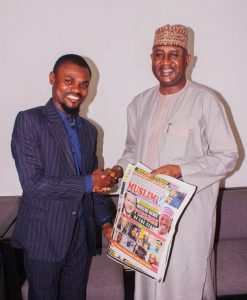 I also welcome your publication because we in Nigeria, especially Muslims have been suffering from the deliberate misinformation in the Nigerian media that is largely owned by non-Muslims and whose editors, reporters, and quite a number of their strategic and influential staff are actually deliberately misinforming people about Islam. They are very partisan in favour of their religion. This is something you can see in their headlines; and because they do not subscribe to Islamic religion, it is very well known that they have politicized the news rooms.They conduct the activities of their religion in the premises of their media offices; and if Muslims ask for a mosque and space to conduct their prayers, they are often denied. Today, if you check a census of how many editors and publishers we have, or owners of the electronic media, it is clear that we are marginalized.

There was a lot of hue and cry. Those who were in Marketing and Sales Departments were of the opinion that we were going to lose a lot of revenue. However, for him as a convinced Muslim, who was always conscious of meeting Allah and accounting for all his deeds in the Hereafter, he decided to say “no” because his decision to ban alcohol and cigarette advertisements weren’t about money. It is about his final reckoning with his Creator who says we should not drink alcohol and who has banned him from advertising or associating with anything that encourages the drinking of alcohol as well as other vices.

Until he died, he never lacked. He had enough money to bridge the gap of the so called advertising revenue lost in that circumstances. Secondly, we as Muslims are not looking at it from the political point of view. Islam is a religion that discourages inflicting harm on fellow human beings, whether a Muslim or non-Muslim. Everybody knows that there isn’t anything positively derivable from the drinking of alcohol or from cigarette smoking and other vices except inflicting harm on oneself.

That’s why the cigarette industry was routed out basically from the United States of America. American judges and later Western judges decided to clamp very extreme and harsh judgments on tobacco manufacturing companies whenever victims of their products took the tobacco companies over the death of their kiths and kins or loved ones. They routed them out, but they have come here to set their companies in Ibadan, Zaria, Kenya and so on.
However, we thank God that in terms of policy, even non-Muslims  like the late Minister, Ransome Kuti banned smoking in public places. 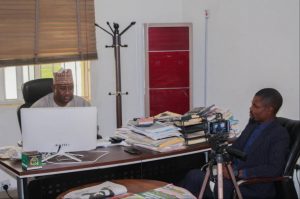 He was not a Muslim but he did that out of conviction as a medical doctor who knew the harm that was being inflicted to even non-smokers. Secondly, billboards advertising cigarettes have been banned as well as kiosks and all other devices that cigarette manufacturing companies use.

It is a battle that is compatible with Islamic injunctions. At any rate, I am not sure if there is anywhere in any religious scripture that encourages drinking at any stage, especially the kind of consequential misbehaviour that is often associated with drinking, which to me, is the same with drug addiction because they have the same negative effects.

Let me say also that the absence of national newspapers like the Concord Press has robbed Muslims of getting feature articles and stories about Islam; editorial opinions that are also very robust and enlightening. It would, undoubtedly, have tremendously helped in clearing a lot of ignorance being circulated in today’s media.

It is also a challenge to Muslims to come up with such newspapers. There are proprietors of Nigerian media outlets who are Muslims, but have decided to treat their media as businesses. What they have forgotten, because they are afraid of being tagged and branded as fanatics, is that they have allowed the enemies of Islam to use the same medium to attack Islam and that is quite unfortunate.

I would not want to mention names, but of course, it is very obvious that quite a number of these newspapers, television houses, radio stations owned by Muslims have scenarios of this nature. Apart from that, I also feel that we are to do a holistic, national ethical renewal. Journalism itself abhors unethical practices, whether in the practice of mainstream journalism, through advertising or public relations. These are the three dominant elements or actors in the media. The journalists that write the stories, do the features; advertisers that display advertisements and then public relations officers who probably are aggregators and planners of things in the interest of the people.

So, each of these three professions are guided by ethics, code of conducts for their members. These ethics are derived from our sense of morality. We must be circumspect and reflect on various points in time about whether our morality or ethics allow us to encourage violence, hate, the resort of our youths to drugs, drinking and all the things that constitute a valueless society. We are a part of that society.
I have always advocated journalism with social relevance. Journalism has no relevance to me if it will not connect with the yearnings and aspirations of people. It means it is a surrogate journalism, a misrepresentative journalism. That’s what it is. It is fake, in so far as it doesn’t convey the feelings, preferences and aspirations, aggregate them and also bring them to the attention of the leaders of the country and all those who matter.

MN: But sir, investigations revealed that many non-Muslims dominated the editorial and management of the Concord Press despite being an Islamic-biased medium. Any justification for that? 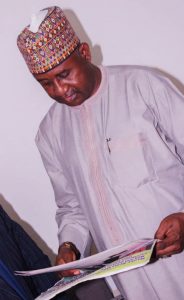 I was just an Assistant Editor in African Concord, and if you look at the lineup that time, it started from Dr. Doyin Abiola, a Muslim who was the managing director; the next in line was the deputy managing director who was a Christian, and quite a number of the editors including the Daily editors; the editors of the business titles and so on were all Christians. But that didn’t matter. In fact, Alhaji Liad Tella, a southern Muslim, was group news editor though he did not rise to become an editor. There were quite a number of Muslims who can attest to that, but at least there was harmony.

MN: Was it that Muslims at that time did not have qualifications to become heads in a medium owned by the late MKO Abiola?

Watch out for many more intriguing questions and explosive responses from Honourable Sani Zorro in the March/April 2020 print edition of Muslim News, Nigeria’s most authoritative Islamic newspaper. Consider a kind donation to support our journalistic effort. Donate HERE