Muslim News Fact-check: The truth about the viral video of late Sadam Hussein’s claims on Coronavirus

A purported video of the late former Iraqi President, Saddam Hussein has emerged on social media, where he reportedly claimed that the United States of America planned to wage biological warfare against his country with a disease known as Coronavirus.

In the 2 minutes, 3 seconds video which has been shared widely across various social media platforms, Saddam Hussein was purportedly telling the Iraqi officials during a meeting how the US was threatening to use a disease known as Coronavirus against his country.

A twitter user, Mohammed Suleiman who was one of those who posted the video with a message that the former Iraqi president, Saddam Hussein talked about the threat of Coronavirus nearly 20 years ago in the video. 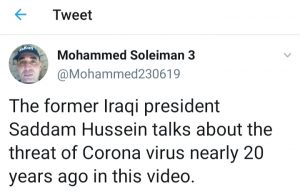 Another user with the handle @wrt97 wrote in Arabic, which was translated to English by Muslim News:

“For you to be sure that Coronavirus is created by the terrorist countries to topple economy, listen to what Sadam said the day they threatened him”. 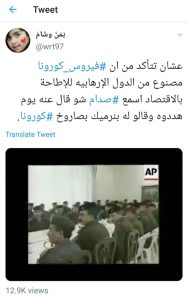 Conspiracy Theorists, Muslim News learnt, are beginning to circulate the video using it as a justification that the virus, which has caused the death of some 6,600 people, spread to more than 140 countries, including Nigeria, with confirmed cases of over 167,000, was allegedly created in the lab as part of US biological warfare against China.

Several users on WhatsApp also shared the video with the following caption:

“What other evidence do you need that America, to destroy the economy of China that was far ahead of them, attacked China with the virus.

“Unfortunately, it was not only China that was afflicted but the whole world. America  not excluded,” the message read, in part.

The message was also supported by sharers with verses from the Qur’an where Allah says;

“We didn’t forget anything in the revelation  of the Holy Qur’an”, and also, “And fear a trial which will not strike those who have wronged among you exclusively, and know that Allah is severe in penalty”. Qur’an 8: 25

“May Allah come to the rescue of Mankind,” the message added.

A critical analysis of the video by Muslim News however showed that it was fake and doctored by some mischievous person(s) who unfortunately supported their lies with verses of the Qur’an to mislead the general public.

The late Saddam Hussein’s daughter, with handle @RghadSaddam who was tagged by many tweeps on the video quickly debunked it on her verified Twitter account, saying that the clip was fabricated and the voice is of someone else and not that of her father.

“Fabricated video…! Formed voice of another person to sound just like President Saddam Hussein. This person has done several videos to make it sound like that of Saddam Hussein…who ever is vigilant will know for sure that the voice is a decoy and not of the martyred president.” 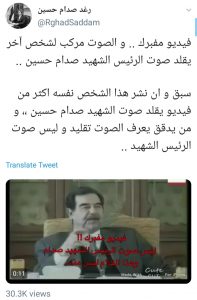 Although there have been reports of conspiracy theories in the media about the origin of the novel coronavirus, including the allegation by a Chinese that;

“the virus is an American disease that might have been introduced by members of the United States Army who visited Wuhan in October”, before it was formally confirmed for the first time in December, 2019.

Iran, which has the third highest case in the world outside China has also accused President Trump of “economic terrorism,’ demanding that the United States immediately lift sanctions against Tehran.

General Hossein Salami, the Commander of thr Revolutionary Guard had in early March said the Coronavirus “perhaps is a bio-terror attack” by the United States, used first against China and then Iran, and promised Iran would defeat the virus “whether or not it is the doing of the United States”.

There are however no strong evidence to backup these claims.

But how does a Muslim relate to news like this without misleading the general public? Allah in the Qur’an provides answers;

“If a Fasiq (liar- evil person) comes to you with any news, verify it, lest you should harm people in ignorance, and afterwards you become regretful for what you have done.” Quran 49: 6

Let’s be guided by Islam through the Qur’an and Hadith.