▪Prayers in congregation will continue - Chief Imam of Ilorin

Thousands of Muslim faithful in Kwara State, North Central, Nigeria on Friday gathered at their various central mosques for special Juma’ah service to ward off the Coronavirus pandemic from Nigeria and other affected countries.

The two rakah Solaah and special Du’a was held at various Juma’ah Mosques in the state, including the Ilorin Juma’ah Central Mosque, where worshippers in their thousands prayed for the country to overcome the pandemic.

The special prayer at the Ilorin Central Mosque, Muslim News reliably gathered, was led by the Chief Imam, Sheikh Mohammed Bashir Salihu at the instance of the Emir of Ilorin, Alhaji Ibrahim Sulu- Gambari and other chiefs and Islamic Scholars.

The Chief Imam led the prayer and was assisted by other prominent clerics, including the Imam Imale of Ilorin, Sheikh Abdullahi AbdulHamid.

Imam Salihu recommended special prayers for thousands of Muslim worshippers to say at specific periods of the day in order to get rid of the rampaging Coronavirus.

He beseeched God to save humanity from the pandemic and other killer ailments.

The chief Imam who urged the people to adhere to the best health practices such as washing of hands and maintaining high level of personal hygiene and tidy environment, however, counselled them on the need to move closer to their creator.

According to him, it is only God that has solution to every problem, and therefore counselled the people of the world to move closer to their creator through acts of worship and righteousness in this crisis period.

He posited that it is only through this that a quick solution could be found to the Coronavirus pandemic across the world.

He thanked the Emir of Ilorin for blazing the trail in organising prayer for a quick solution from God to the ravaging Coronavirus which has claimed many lives around the world.

Sheikh Bashir also offered special prayers for journalists who were led by the state Chairman of the Nigeria Union of Journalists NUJ, Mallam Umar AbdulWahab to the Juma’ah Central Mosque to cover the event. 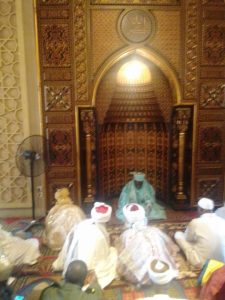 Muslim News correspondent in Ilorin confirmed that the State government has not banned religious gatherings of over 50 worshippers as has been enforced in Lagos and Ogun.

In a press statement, the Commissioner for Education and Human Capital Development,
Bisola Fatimah Ahmed said the state is on red alert as the world confronts this pandemic.

“Every stakeholder, including religious organisations, is urged to put public health above every other considerations. Humanity needs all the help it can get at this trying moment and everyone is urged to do everything necessary, keeping in mind that the world is facing an emergency,” she added.