In flagrant disobedience to the President-general, the Nigeria Supreme Council for Islamic Affairs and Sultan of Sokoto, His Eminence, Alhaji Muhammad Abubakar Sa’ad III, the Council of Chief Imam of Ibadan Land has ordered that Taraweeh be prayed tonight, saying Ramadan commences tommorow, Thursday 23rd of April, 2020.

Muslim News had earlier reported the Sultan’s message to Nigerian Muslims, urging them to search for the Crescent of Ramadan tomorrow, Thursday, 23rd of April, 2020.

However, a letter signed by the Chief Imam of Ibadan Land who also doubles as the Grand Patron of the League of Imams and Alfas of Yorubaland, Sheikh AbdulGanniy Abubakry Agbotomokekere announced tomorrow (Thursday) as the beginning of Ramadan fast.

The statement read, “This is to inform the entire Muslim Ummah that (sic) the commencement of Tarawi (Asamu) today Wednesday 22nd of April, 2020 equivalent to Shaban 29th 1441 and tommorow Thursday 23rd of April, 2020 will be the first day of Ramadan 1441.”

Muslim News placed a call to the Chief Imam, but was answered by his Personal Assistant, Mr Idris Sulaiman, who confirmed that indeed, the letter emanated from the Council of the Chief Imam of Ibadan Land.

He also emphasized that Ramadan commences tomorrow, Thursday 23rd of April, 2020 as Muslims are to observe Taraweeh at home this night in compliance to the COVID-19 lockdown.

Asked of the modality used in reaching the conclusion since tomorrow, Thursday, is Shaban 29 based on the Sultanate counting, Mr Sulaiman said it was a matter of knowledge, adding that those with practical knowledge of moon sighting would understand that Ramadan commences tomorrow.

Muslim News further inquire from Mr Sulaiman to share such knowledge with us, but he told our correspondent to meet him physically for better explanation as the discussion was “not meant for telephone.”

In the same vein, while the majority of Muslims in Nigeria are expected to search for this year’s Ramadan moon after sunset on Thursday, in compliance with the Sultan’s order, the League of Imams and Alfas of South-West Nigeria otherwise known as Rabitot-ul-Aimmah wal ‘Ulama has officially announced Saturday, April 25 as the commencement of Ramadan.

History of Ramadan controversy in Nigeria

For years, the commencement and termination of Ramadan fast in Nigeria has generated contentions and controversies, courtesy of the Rabitot-ul-Ammah wal’Ulamah, since the time the organisation was founded and led by its pioneer chairman, late Sheikh Adam al-Ilory.

Similarly, in 2011, some sections of the Muslim community refused to obey the instruction of the Sultan to commence Fasting on Monday. For instance, the Jama’atu Izalatu Bidi’a wa Iqamatu Sunnah based in Jos already commenced fasting on Sunday on the instruction of their leader, Sheikh Sanni Yahya Jingir, even when the leadership of the Supreme Council for Islamic Affairs had unequivocally told Muslims that the moon was not sighted on Saturday, asked to complete the counting of the month of Sha’aban (to 30) and then commence fasting on Monday.

Spirited effort of the Ummah

However, with the special help of Allah and collective efforts of the Muslim Ummah, the Muslims eventually became re-united in 2009, 2010, 2012, 2013 for unified Ramadan fast until 2014 when the leadership of NSCIA dished out two directives – first, that Muslims should begin fast on Sunday, June 29, while the second, (that attempted to correct the earlier one), which came late, around 1.00am ordered Muslims to begin fasting on Saturday, June 28.

Again, in 2017, the League of Imams and Alfas continued its onslaught as it declared Saturday May 27 for the commencement of Ramadan, in contravention to the pronouncement of the National Moon Sighting Committee, which declared, “either Saturday May 27 or Sunday May 28 as the first of Ramadan.”

In 2019, the Mudeer of the Arabic and Islamic Training Centre, famously known as Markaz Agege, Sheikh Habeebullahi Adam Al-Ilory on Wednesday, June 5 led thousands of his followers to observe the 2019 Eid-el-Fitr prayer. 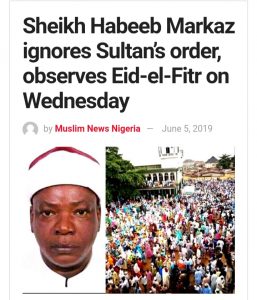 His action went directly against the injunction of the Sultan of Sokoto and President-general of the Nigerian Supreme Council for Islamic Affairs (NSCIA), Alhaji Saa’d Abubakar III, who led millions of Nigerian Muslims on Tuesday, June 4.

However, just when the Nigerian Muslims had thought the shameful and needless disunity and flexing of muscles of the past had become history – courtesy of untiring effort of the Sultan, its office and many other well meaning organisations and Nigerians (such as late Dr AbdulLateef Adegbite, Prof Ishaq Oloyede, amongst others) that put many machinery in place to ensure a united Ummah in all spheres of life – the Robitoh and the Ibadan Council of Imam – all in southwest, emerged from the blues to again weaken the Ummah’s symbol of strength and unity with its contra-instruction about the commencement of Ramadan fasting.

By Rasheed Abubakar and Abdulganiy Abdullah