A section of media outlets in the Arab world have come under a barrage of criticisms from Muslims across the world for their critical stance and reviews of Turkish government’s decision to return the iconic Hagia Sophia to its earlier status.

Millions of Turks were filled with joy and excitement last Friday, when a Turkish court revoked the 1,500- year-old monument’s status as a museum back to a Mosque.

However, as Muslims worldwide were jubilating and praising President Recep Tayyip Erdogan’s bold step for restoring the dream of Sultan Mahmed II, there were criticisms from Greece, Cyprus, some Church leaders, and their allies in the West.

Ironically, Muslim News findings revealed that, the reversion did not go down well with some Arab media and their owners, who have resorted to the use of uncouth words to attack President Erdogan-led government.

Arab media outfits as Saudi Gazette, Al-Arabiyyah English joined their counterparts in the West in the promotion of news and features that put out derogatory remarks against Turkey.

From accusing him of hypocrisy to calling him a supporter of extremism because of his affiliation with, and commendation from Muslims across the globe, these Arab writers pulled no punches in making a straw man out of President Erdogan, who is regarded by majority of Muslims as the current leader of the Muslim Ummah or the Islamic World

In another news report published on July 11, Al-Arabiyyah English had accused President Erdogan of “double speak”, who ignored “international warnings”.

One of Erdogan’s critics is an Arab commentator, Dr. Saud Al-Sarhan, who wrote in an article, “Hagia Sophia move shows nothing is off-limits for Erdogan’s populist Islamist project”, published on Thursday by Al-Arabiyyah English.

He posited that President Tayyip Erdogan’s decision is a “gimmick” that will desecrate the legacy museum and damage Muslim-Christian relations. 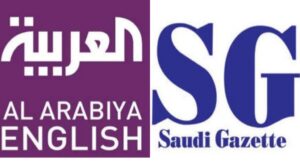 Wafa Al-Rasheed, in her article, ‘Hagia Sophia and Erdogan’s stupidity!’, published by Saudi Gazette, on July 13, described the announcement to return the museum to a mosque as ‘stupid’ and ‘provocative’ to the civilized world.

She wrote that, “The anger and hostility of all the Christians of the world are directed against you.”

However, overwhelming number of Muslims on the social media handles of the Arab media outfits expressed grave disappointment, describing as “unethical and irresponsible journalism” typical of their Western counterpart’s inexplicable deep-seated hatred for Erdogan and the overall interest of the Muslims.

The thread on the comments section on all social media handles of the anti-Erdogan’s Hagia Sophia news shows that the Arab leaders have become rotten from within and are speedily losing credibility from their citizens.

A resident of Saudi Arabia, Pernia Jerbar, said he wasn’t surprised at the Arab leaders enmity against President Erdogan; saying, “The Kingdom has already turned many mosques into clubs and bars. They have demolished many as well. Hagia Sophia was bought by paying the Byzantines of that time. It was illegal to turn it into a museum. Please, gain some knowledge before passing stupid comments.”

“The headline that disparages and insults the leader of a country is unbecoming of a newspaper like Saudi Gazette,” said Prof Abdullah Muhammad from Tokyo, saying, “It’s about time the editors rethink this anti-Turkey, anti-Erdogan rhetoric.”

The Professor at Tokyo Institute of Technology added that, just like countries worldwide keep telling others to stop interfering in their internal affairs, Hagia belongs to Turkey, so they have every right to put it to whatever use the deem fit!

“BTW, It was indeed constructed to be Cathedral, but with the fall of the Byzantine empire, the Ottomans had bought it and turned it into a Mosque in 1453…and it remained a Mosque until 1935.”

In his own comment, Shazia Umer from Lahore said there is no connection in comparing the injustice of the Israeli apartheid regime in Masjid Al-Aqsa with the re-conversion of Hagia Sophia to a mosque. 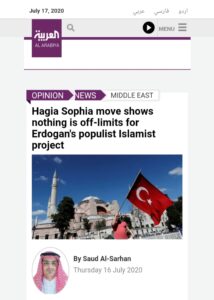 “Hagia Sofia is someone’s (Sultan Mahmed) private property. He bought it so that people worship one God. It’s that person’s choice and will that people just get connected with their Creator. Yes! Turkish government keep those artifacts and walls with mosaic art and keep it open for public. Because they can easily be separated from the main hall of masjid,” he added.

Yinka Salaam, a journalist from Nigeria, said, “If it was okay for a secular leader to turn the Mosque into museum, if the action was considered a commendable act by the secularist countries, it shouldn’t be out of place for a Muslim government to return the monument into the pre-secularist era, when Turkey was the seat of Caliphate, and it would be perfectly in order for Muslims to congratulate Erdogan.”

Salaam called on the world to inquire from Spain what has become of the greatest/largest mosques of Andalusia in Spain and that of Cordoba?

According to him, “Let Saudi Arabia and other western countries speak against the occupation of the land, the acquisition of homes and scores of Mosques in Palestine. What has become all the Palestinian mosques that used to be in the acquired lands and residences of the Palestinians? What has been the reaction of the world to the shift of the Israeli’ capital from Tel Aviv to Jerusalem?

“Isn’t usurpation of homes and shelter not worse that usage of an acquired property (on a conquered land)? Hagia Sophia is neither an embassy nor a mission house, it had been a Mosque for about 500 years, and it remains the Turkish’s property. So, why the fuss?,” he asked.

– By Rasheed Abubakar and Abdullah Abdulganiy