Mammoth crowd of Muslim worshippers – estimated to be about 350,000 took part in the first Friday prayers both within and outside the precincts of the iconic Hagia Sophia mosque in Istanbul, Turkey’s largest metropolis.

Before the Friday prayers, Turkish President Recep Tayyip Erdogan recited from the Quran inside the reopened mosque, choosing from both the Surah Al-Fatihah and the Surah Al-Baqarah.

Later, four muezzins from the mosque’s four minarets recited the adhan, or call to the prayer, and the people started the Friday prayers.

During the visit to the tomb of the Hagia Sophia Mosque’s “owner,” Erdogan noted that restoring the landmark as a mosque had only been made possible after 86 years with the joint efforts of the People’s Alliance — comprising of his ruling Justice and Development (AK) Party and Bahceli’s MHP — and with the “judiciary now seeing the truth.”

Erdogan, who won the 2018 and 2019 editions of Muslim News ‘Global Muslim Personality’ Awards, did not mince words when he stated that reverting the museum to its original status as a mosque had been his childhood dream.

“As a cultural heritage of all humanity, it [Hagia Sophia Mosque] is a place where people of all religions can come and visit,” Erdogan said.

He underlined that the monument now returned to its “roots” and would serve all believers.

“Now, this place has returned to its roots, it was a mosque and became a mosque again. Now, I hope it will continue to serve all believers forever as a mosque.”

Erdogan also added that specialists from the Culture and Tourism Ministry would conduct restoration efforts both inside the Hagia Sophia and in its surrounding area.

During the service, Ali Erbas, the head of Turkey’s Religious Affairs Directorate (Diyanet), read out a special khutbah, or sermon, before the collective prayer, titled as “Hagia Sophia: Sign of conquest, our trust in Fati̇h [Sultan Mehmet].”

Erbas said: “In this blessed time, together, we are witnessing a historical moment in this holy place.”

“Hagia Sophia Mosque regains its congregation today, the third day of the blessed Muslim month of Zulhijjah, in which the blessed Eid al-Adha, or Feast of the Sacrifice, is approaching us.

“The longing that turned into an open wound for the heirs of Fatih has now ended. Eternal praise be upon Allah the Almighty.

“Today is the day when takbirs [Allahu akbar], prayers, and salavats [salutation upon the prophet of Islam] resonate in the domes of Hagia Sophia, and the adhan – call for prayer –rises from its minarets. 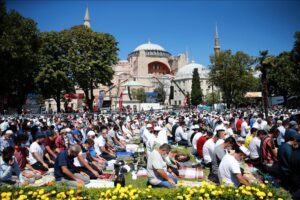 “Today is a day similar to one 70 years ago, when 16 muezzins from the 16 minarets of Sultan Ahmet Mosque, located just opposite Hagia Sophia, joyfully filled the air with adhan, after an 18-year hiatus.

Muslim News, Nigeria's most authoritative Islamic newspaper released its special e-paper, celebrating with President @RTErdogan, the people of Turkey & the Muslim world on the reopening of #HagiaSophiaMosque 86 years after. Follow https://t.co/GUQ4h6M4vG to read more on #Ayasofya pic.twitter.com/DD4gUJTHS0

“Conquest is a revival, not an attack, and is reconstruction, not destruction.

“‘And when you have decided, then rely upon Allah. Indeed, Allah loves those who rely [upon Him],’ Quran, Surah Al Imran, verse 159.

“Ottoman Sultan Fatih Sultan Mehmet conquered Istanbul with the will and grace of Allah, and allowed not even a single stone of this cherished city to be damaged.  Full transcript of the Khutbah HERE .

House of worship and tourist destination

Besides being a working mosque, Hagia Sophia is also among Turkey’s top tourism destinations for domestic and foreign visitors alike.

In 1985, during its time as a museum, Hagia Sophia was added to the UNESCO World Heritage List.

Erdogan and other Turkish leaders had long advocated it returning to a working mosque, open for worship.

On July 19 a Turkish court annulled a 1934 Cabinet decree that turned Hagia Sophia into a museum, paving the way for its use as a mosque.

In the new era for Hagia Sophia, Turkey’s Religious Affairs Directorate oversees religious services at the mosque, while the Culture and Tourism Ministry supervises restoration and conservation work.

The architectural treasure is also open to domestic and foreign tourists free of charge.

Millions of Muslims across the world shower encomiums on historic move

Encomiums have continued to pour in for Turkish President, Recep Tayyip Erdogan on the historic conversion of Hagia Sophia into a mosque. 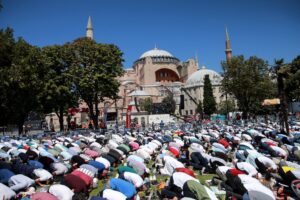 Muslim News monitored the comments of Muslims on different social media platforms and chronicles some of them in this report.

Syed Rizwan Ahmad wrote from India: “Indeed a historic day and historic event in the Muslim world. A bold step taken by President Erdogan. It should be fully converted into a mosque.

“Those who demolished Babri Mosque in India and are building a temple there forcibly have no right to say anything.”

Speaking from Kano, Nigeria, Jamilu Ibrahim said, “Great day for all of the peace loving people all over the world. A great history has been made again which will never be forgotten, it was made by his Excellency, the Turkish president and freedom figher.

“I love you and pray for you hard from my heart. May Allah swt bless you with everything you need to be firm till the end of the world. God’s protection upon you day and night.”

On his part, Rafiuallah Noori from Aghanistan wrote: “Muslims across the world strongly agree with the reconversion into a mosque. It is a really good decision that has been taken by HE President Erdogan.”

“Really to the Turks, this hero is Erdogan. The truth of any Muslim person who has a jealousy over Islam is his right to be proud of the leader of Europe while he is Erdogan. I salute you from Sudan, the land of Samar,” Sofian Bannaga Alsheakh from Sudan said in his emotion-laden remarks.

… with additional information from TRTWORLD