Muslims hail Niqobi shoemaker for being industrious, silence her critics

▪︎ ‘She should have used hand gloves, cover her face more’ – Critics

▪︎ ‘We’re not Allah to judge. Why castigating her as if we’re better than her’ – Others reply

A large number of Nigerian Muslims have praised Niqobi, Hajia Aminah Adegoke (Umm Adnan) for her ingenuity and industry, advising her not to look the way of her critics.

In an interview with BBC Yoruba, the 31-year old Muslimah in veil said she took up a vocation in shoe-making because she found it personally appealing.

In the video interview that has now gone viral, she frowned at the conspiracy theories and acts of discrimination against Muslim Hijabis and Niqobis, noting that she took up the vocation to challenge such erroneous beliefs and stereotypes.

The Muslimah shoemaker said she sought the consent of her husband before delving into the trade, adding that onlookers were always surprised seeing her ply the trade.

She recounted how she was nearly frustrated with the aspersions and reactions of people towards her in the course of her apprenticeship, noting that it was the entreaties of her husband that kept her going.

Adegoke, amid elation and exhilaration, narrated how she has become successful in the shoemaking industry, saying customers are always wowed at the quality of her products.

A large section of Muslim netizens have showered encomiums on Niqobi , applauding her courage and industry, Muslim News findings have revealed.

Oladimeji Sanni wrote, “Great! This is interesting, supported by me. Keep rolling, keep up the good work. You have a good husband, my best regards to him.”

Also reacting, Fatima Ajibike Oyebiyi prayed for greater heights for the Niqobi, affirming that only her face was covered and not her brain.

On her part, Yeyetinu Lawal said, “Myself, I don’t like the Elehas (women using veil) for their covering. I saw an Eleha driving, and I was thrilled for the covering while she drives. But listening to an ambitious and determined Eleha (Aminah Adegoke) makes me enlightened. A working class and educated Eleha. Aminah, I cherish you alot, kudos to you!“

According to Sherifat Balogun, “You give courage to other Muslims out there, especially me. I am inspired.”

Some Christians salute her…

Some Christian social media users also saluted the Niqobi shoemaker for her bravery, encouraging her not to relent.

Also commenting, Opeyemi Adegun said, “Great, as long as its convenient for you in a hot and humid country like Nigeria to dress that way, you are welcome. You are good.”

While both Muslims and non-Muslims have unanimously continued to applaud the Niqobi for her expertise and industry, some Muslims rebuked her, claiming that she shouldn’t have revealed her hands during the interview.

The social media ‘Shari’ah police’ literally mocked the Niqobi despite the fact that she works from home, then took a swipe at the supportive husband for allowing his wife to appear in the video without ‘dressing properly.’

A certain Ustaz Abdul Fatah Sarumi, said, in an audio, “You would have seen a trending video of niqobi making shoes aired by CNN (although he wanted to say BBC). It’s not haram (unlawful) for women to work either hand works, (sic) businesses, etc they must not let that to affect the laws of Allah.

“The lady, either out of ignorance or mistake, shouldn’t have allowed her hand to reveal in the video. She should have used her glove and cover her face well. (sic) The worst part of the clip was the concluding part where she twisted round showcasing her front and back sides.” (sic)

Muslims fire back at her critics

Many Muslims on social media have however condemned the said cleric and those who attempted to denigrate the niqobi unfairly, got deprecating invitations including ‘keyboard warriors’, ‘holier than thou’ and ‘Shari’ah police’ who lack Da’wah methodology of correcting people’s mistakes if any exists.

Falilat Abiri Balogun, for instance, wrote: “Na wa! Muslims, we seem to be our own problem. Contrary to the general opinion that Muslim women are lazy and uneducated, she stood proud with her niqob to prove otherwise, our fellow Muslims are still criticising her, let Allah be the best judge. Anyway I am proud of you, with this your singular feat, you have won my heart and motivated me to start wearing niqob, just like I would also be that Niqob sister that stood out and made Islam proud. Thumbs up for you dear sis.”

Also reacting, Jelilat Opeyemi Olawale said, “Half-baked knowledge individuals who think they are perfect (àwọn àkobí Ọlọ́run) and passing fatwa on another. It’s so shameful… So hypocritical and uncalled for. I hope Umm Adnan realizes that for every thoughtless comment she got, there are hundreds thoughtful ones from women and men who are inspired by her passion. May Allah ease her affairs.”

For her part, Modeenat Abayomi-Borokinni enthused: “Oga ooo! Awon keyboard warriors yiii shaa!! I didn’t even know issues were raised on the BBC video. Personally to me, it was an inspiration. I will just implore that the sister just waka pass all those yeye comments. Inasmuch as she had a sound intention for what she did, and moreover its between herself and Almighty Allah.

“Make she no worry about wetin ppl dey talk. I don’t know what’s bad in a woman having her own personal business even if her husband is a multi-billionnaire. Just be yourself sis, and be happy. No mind bad belle people o jee.” 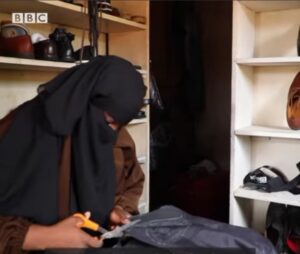 AbdulAzeez Olalekan Abdullahi decried the level of intolerance rising among Muslims, noting, “We ended up crucifying an innocent woman that we have never met at all. We don’t know her struggle and story but we ended up castigating her as if in our hands and legs lie the keys to paradise.

“Where is the tolerance? Where is the excuses that Muslims should give to their brethren?” he queried.

On her part, Lateefah Adewunmi who related with niqobi Aishat and listened to her side of the story, provided a comprehensive account of what really transpired, saying that the twisting that happened at the last part of the clip was not really intended.

According to her, “Firstly, she works from home. The shop where her goods was being displayed is in her house. She lives upstairs while her shop is downstairs. She just had to go down stairs whenever she had work to do which isn’t affecting her responsibilities as a wife. Let’s get hold of facts before concluding.

“Secondly, she doesn’t interact with male customers, her husband does on her behalf. Thirdly, a BBC staff passed by her shop and was amazed by her wonderful expertise. He proposed to conduct an interview and with the permission of her husband, she consented. Fourthly, her aim was never to mislead anyone. Her intention was to motivate women to pursue their dreams and aspirations despite the hijab or face veil in accordance witg the dictates of Islam.

“Fifthly, about the turning or twisting, she swore by her Rabb that it wasn’t intended. She said her name was being called, she turned around to answer and that was how that place was captured. She admitted the mistake of not telling BBC to edit that place out. In fact, she admitted with tears that the whole video was a mistake.

“Sixthly, she’s a niqobi who doesn’t wear the hand glove and she couldn’t form what she was not because of a video. She agreed she should have, at least for the reason that the video would be aired for the WORLD to see. But wearing a glove was not even achievable in the video because she was making use of her hands to work on some shoes in the video.

“She couldn’t possibly add adhesive to shoes or use the hammer with a glove on. But all the same, she admitted her mistake. And now with the criticism, she told me she’d ordered for hand gloves, not to please the critics but she drew some lessons from the criticism which is that a niqabi should cover all, including her hands. Thanks to the critics, she getting better while they’ll be accruing sins on themelselves if they do not stop the vendetta,” she concluded.