A Non-Governmental Organisation, Enough is Enough (EiE) Nigeria has come under severe scrutiny and criticism for organising a virtual lecture on the killings in Southern Kaduna without inviting a Muslim speaker.

Muslim News findings revealed that Southern Kaduna has been mired in incessant killings and bloodletting.

The State government accused armed bandits of carrying out the recent attacks but a section of the media reported that the disturbances were the handiwork of militants who targetted only Christians, an allegation that has been belied by Muslims in the region.

The NGO, therefore, staged a virtual policy dialogue series on Friday, July 31, to trace the historical background of the killings in Southern Kaduna.

In a flyer sighted by Muslim News’ Correspondent, EiE Nigeria invited two guest speakers – Cheta Nwanze and Stephen Kefason, alongside the host, Ndi Kato, all of whom are Christians, to talk to the thematic; “#SouthernKadunaKillings: Religious, Ethnic or Something Else.” 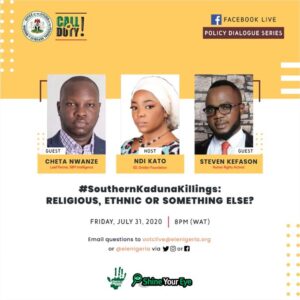 Reacting to the flyer posted on her verified Twitter handle @EiENigeria, a group of Muslims in Southern Kaduna accused the organisation of hypocrisy, promoting ethno-religious bigotry and prejudice

According to the Muslim group, “It’s very sad that a platform that should promote unity among Nigerians has joined the bandwagon of hypocrisy and ethno-religious bigotry. Discussing Southern Kaduna crisis without plurality and having at least someone of the Hausa/Fulani extraction and a Muslim from that region is basically irresponsible and poor judgement. This is an attempt to silence us.

Its very sad that a platform that should promote one Nigeria have joing the band wagon of hypocrisy and ethnic-religion bigotry.
Discussing about southern kaduna crisis without having one hausa/Fulani muslim from that region is not fair. This is an attempt to silence us. https://t.co/gEyNyB6O6A

“We will never regard @EiENigeria as a platform with a sincere motive, with these attempts of rewriting history and promoting hatred and lies against some victims, especially Muslims, until they give Southern Kaduna Muslims a fair and equal chance to tell their own side of the story,” it said.

Muslims being killed in Southern Kaduna

Earlier, the Muslim Youth Foundation of Southern Kaduna (MYFOSKA) had alleged series of isolated killings of their members who are either on transit or in the process of carrying out their legitimate business in parts of Southern Kaduna.

In a statement issued by its National Chairman, Mohammed Kabir Bello, the group stated that Muslims have found themselves in the middle of a guerrilla attack and unreported killings in different parts of Southern Kaduna.

Meanwhile, concerned Nigerians have started to react to the one-sided lecture on Twitter, here is what they have to say.

According to Dr Musa Bayero, “This is dead on arrival. If you guys are serious and honest, you’ll never have one-sided discussants in a critical session like this. None of them would be fair. You have clearly demonstrated your bias and insensitivity.

“That is the most dangerous part of the session. I hope @elrufai @GovKaduna and other well wishers of Kaduna state would monitor and track what they will disseminate from that one-sided arrangement.”

On his part, a Twitter user who goes by the name AbbaShet, building on Bayero’s contribution, wrote: “This is more than dead on arrival. They’re deliberately fanning the flame. Just look at their question and the backgrounds of the invitees. They are inviting all Christians, all PDP sympathisers and non-ethnic member to address the issue of religious/ethnic crisis in an APC state.”

Who is EiE Nigeria?

Enough is Enough (EiE) Nigeria was founded by two Christians, Adebola Williams and Chude Jideonwo, as a coalition of individuals and organisations committed to instituting a culture of good governance and public accountability in Nigeria through active citizenship.

Muslim News learnt that the founders are no longer in charge of the organisation and EiE is now managed by four board members, with another Christian, Yemi Adamolekun, as Executive Director.