Nigerian Muslims and Media Apathy; A Perspective by Rasheed Abubakar

In the history of Nigerian media, no mainstream newspaper has ever given prominence to the coverage of Islam and Muslims as done by the now “rested” National Mirror. “Rested” is in quotes because the newspaper is not dead but only halted publishing, and according to sources close to the owner, Ondo state-born businessman, Jimoh Ibrahim, the newspaper is only going through reorganisation.

Although not among the top 7 newspapers in Nigeria, National Mirror dedicated 22 pages of her Friday edition-including its cover story-to Islam when it commenced production in 2009, before it gradually reduced such to four (4) pages every Friday and eight (8) pages on the last Friday of every month, due to change of ownership. At some point, the newspaper had a Friday editor, an Hijabi Muslimah, Hajia Sekinah Lawal, who is now the Chairperson of the Nigeria Association of Women Journalists (NAWOJ), Lagos chapter.

No newspaper – Muslim or non-Muslim-owned – not even the late MKO Abiola’s Concord or late Arisekola Alao’s Monitor – had recorded such a feat despite their strong pro-Islamic editorial policies before they went into extinction.

Evidently, the introduction of the Friday edition of the National Mirror had a great impact in the circulation of the newspaper. From Lagos in the Southwest, the newspaper penetrated into the North and later became a household name among various Muslim organisations. They would buy copies and mandate their members to do so on weekly basis. Until recently when it suspended production, there existed mutual benefits between the newspaper and the Muslim community.

Apart from the National Mirror, 6 out of the top 7 national newspapers – The Guardian, Vanguard, The Sun, The Nation, Thisday and Daily Trust dedicate 1 to 2 pages to Islam every Friday. The absence of a Friday column in The Punch is not unconnected to the newspaper’s anti-Islam policy and sentiment. Prof Is-haq Akintola once described the Punch-owned by the late Chief James Olu Aboderin-as “the megaphone for champions of Islamophobia” that “allowed religious bigotry to turn her into an instrument of tyranny.” 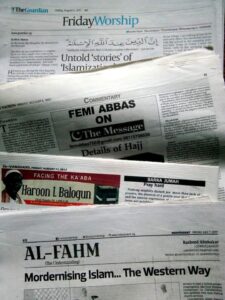 Other newspapers with a regular Islamic column are New Telegraph, Leadership, Tribune and Daily Independent; in which yours sincerely is a columnist.

It is therefore necessary for Muslims to patronise these newspapers, particularly on Fridays. As Muslims buy them, they will learn about the universality of Islamic messages through beautiful news stories, well researched articles and critical rejoinders from their favourite Muslim writers, columnists and commentators.

The truth is, Islam – the religion of over 2 billion people worldwide cannot be practiced in secrecy without the instrument of the media. Islam is a belief system that can neither be ignored nor adulterated with negative media reportage as we experience in today’s world. Islam has been perfected by Allah as established in the Noble Qur’an (5:3). All the Muslims need to do is realise the essence of using the media in propagating and promoting their religion and its ideals.

That is why Allah sent Prophet Muhammad (SAW) to the whole world as a preacher, warner and a giver of glad tidings. Q. 34: 28

For the Prophet (SAW) to be able to carry out Allah’s assignment, he used the best means available then in reaching out to the whole world. By the same logic, the best and most efficient means to reach out to the people in our ever-changing world are the mass media (TV, radio, newspaper and the new media). Once the message gets to the media, it can be disseminated to the rest of the world.

Thus, Muslims must learn how to relate with the media regarding their programmes. Sometimes, we express anger when the media fail to give us cover stories or downplay our religious events, but did we ever ask; what was the level of our engagement with the Press? How often do we make official press releases addressing national issues and suggesting Islamic solutions? Findings show that 2 out of 10 Muslim organisations in Nigeria have a robust relationship with the media. Even if I do not mention them, the media know them.

This notwithstanding does not mean the media will be totally objective in their reportage of Islam and Muslims due to their “Christian origin and prevailing missionary journalism that held sway in the early days of newspapering in the country” as rightly observed by Tella Liad (2017).

The bottom line is the need for the alternative Muslim media owned by individuals, organisations and the Muslim community. But before then, Muslim parents must encourage their children to go into journalism, just as the youths must pick interest in making an illustrious career in the Pen profession.

-Rasheed Abubakar is a journalist and the publisher of Muslim News Nigeria. Email: rawshield123@gmail.com