Fresh details have emerged of how six Hausa-Fulani Muslims were slaughtered in Southern Kaduna, on Wednesday, August 19 at various areas in Zangon-Kataf Local Government Area.

According to Imrana Mukhtar, who compiled the report on behalf of the Muslim Youth Foundation of Southern Kaduna (MYFOSKA), the killings were masterminded by Kataf and Ikulu Christian youths, while accusing the Nigerian media of complicity in the ethnic cleansing.

Mukhtar, who raised the alarm, noted that he sets out to debunk the falsehood peddled in the media that only Christians in Southern Kaduna are killed, adding that Muslims have also been mostly at the receiving end.

According to him, “These are some of the undeniable pictorial evidences of Hausa-Fulani women and children that were murdered in cold blood yesterday (19th August, 2020) at Kamuru, Unguwan Katsinawa Zangon Kataf LG. 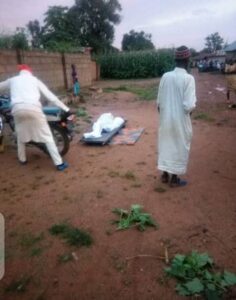 “I didn’t intend to show any dead body in the first place, but to debunk the lies and denial of SOKAPU members most especially Kataf Christian youths in the media that they don’t kill anybody and they are the ones being killed for nothing, thinking the world of yesterday has forgotten what they are known for doing to innocent people out of prejudice and wickedness.

“Below are the deceased names;

“Also, two other men were suspected to have been killed at Gidan Digare Kamuru, Zangon-Kataf LG, their dead bodies are yet to be recovered!”

He continued: “The other picture of the man on hospital bed is Hassan Tambaya, one of those the Kataf militia attacked on Tuesday night, (18/08/2020) at Boto village, Zango kataf LGA, currently receiving treatment at General Hospital Kachia and the other Fulani man standing is the father of the murdered people.

#FreshAttackOnMuslims: 4 Fulani were killed in Zangon Kataf by Atiyap and IKulu christain youths On
19th August, 2020) at Kamuru, unguwan katsinawa Zangon Kataf LG.
Killing of innocent Muslims must stop we urge KDSG and NPF to bring the killers to justice pic.twitter.com/3M09WbZWb6

#FreshAttackOnMuslims: 4 Fulani were killed in Zangon Kataf by Atiyap and IKulu christain youths On
19th August, 2020) at Kamuru, unguwan katsinawa Zangon Kataf LG.
Killing of innocent Muslims must stop we urge KDSG and NPF to bring the killers to justice pic.twitter.com/3M09WbZWb6

“May God expose Southern Kaduna Christians and their associates’ heinous crimes against humanity, most especially on Hausa-Fulani Muslims. It’s getting too much, it’s been over three (3) decades and they always change the stories to a #Fake_Genocide against them to cover-up their actions towards achieving their secret plan of ethnic cleansing through wiping out Muslims completely out of the southern part of Kaduna State, and they shall never succeed #InshaAllah”.

In a phone interview with Muslim News on Sunday, the leader of MYFOSKA confirmed the incident, alleging that the media have been underreporting Muslim casualties.

He urged the Nigerian media to be fair, balanced and truthful in their reporting, saying that is the hallmark of journalism.

Also speaking with Muslim News on Sunday, the Kaduna State Police Public Relations Officer (PPRO), ASP Mohammed Jalige said he couldn’t confirm the incident which has been trending on Twitter since Wednesday.

ASP Jalige, however, promised to get back to us after reaching out to indigenes in the community.