Resurrection: Ertugrul, making strides in the T.V industry across the world, especially the Muslim world, has now achieved its greatest milestone as the Turkish drama has been added to the Guinness Book of World Records as the best dramatic work to date, with views reaching 3 billion and the show having been translated into 39 different languages, reported OyeYeah News.

The Turkish T.V drama took Pakistan by storm after it was aired on PTV on the request of Prime Minister Imran Khan in order to promote Muslim values through media, pushing for content that is both interesting and complex, and is suitable for family viewing as well.

Often described as the Turkish Game of Thrones, the series is woven around 13th century Anatolia and tells the story prior to the establishment of the Ottoman Empire. It illustrates the struggle of Ertugrul Gazi, father of the empire’s founder. Other Turkish TV series have also become hugely popular in Pakistan. 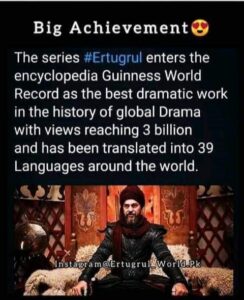 The actors in the TV show have taken Pakistan by storm, as fans from all over Pakistan are mesmerized by the shows characters and the people who play them. The Turkish stars have appreciated all the support and love they have received from Pakistan and its people.

Ertugrul stars are now a part of the Pakistani media scene as many have signed contracts with Pakistani companies that are keen on capitalising on their stardom and popularity after the Turkish show was launched in Pakistan.

Cengiz Coskun known as Turgut Alp made his first appearance on a Pakistani TV channel as he appeared on the Eid-ul-Azha show Waseem Badami and Lala Afridi and said he was excited to interact with his fans in Pakistan.

Esra Bilgic has been the most popular Ertugrul star in Pakistan, sweeping fans away with her beauty the actress has signed contracts working with over 3 major brands in Pakistan including the likes of Jazz and Qmobile.

Turkish actor, Cavit Guner, also known as Dogan Alp from the famous Turkish series Dirilis Ertugrul reached the federal capital of Pakistan- Islamabad on Wednesday. Guner updated his Instagram stories informing his Pakistani fans and followers that he has reached Islamabad.  In a short video clip posted on his Instagram account, he is seen enjoying Pakistani folk music. In the video he wrote, “Gooood morning, Islamabad, Pakistan.”

Engin Altan Duzyatan, who plays Ertugrul Bey in television show Dirilis Ertugrul, is expected to visit Pakistan in October. He will be touring Lahore, Karachi, and Islamabad from 9th to 11th October.

Another world record for Resurrection: Ertugrul

Turkish television series Resurrection: Ertugrul broke the record of most new subscribers in a month on YouTube in May and is in the top 50 most viewed Youtube channels. After being aired on the state-run Pakistan Television (PTV), the serial’s YouTube channel crossed one million subscribers.

PTV dubbed the series in Urdu after Prime Minister Imran Khan visited Turkey last year and was informed about the importance of the series. On April 25, coinciding with the first day of Ramadan, PTV aired the first episode of the popular Turkish TV series that highlights the history of Muslims during the 13th century.

Shortly after the 45-minute long first episode was broadcast, #ErtugrulUrduPTV was trending with viewers welcoming the series as they shared some scenes from the first episode on social media.

GVS News Desk with additional input from other sources