Killing of Muslims in PH, Orlu and the hypocrisy, complicity of Nigerian media, By Rasheed Abubakar

‘What kind of barbaric act is this?’, ‘Why is nobody, not even the media, talking about this?’,  ‘Pathetic’ (with crying emoji) were some of the grieving remarks by some Muslims that saw the pictures of the burnt and demolished Nsukka mosques as published by Muslim News Nigeria on its official Twitter handle, on Sunday, November 1.

The Islamic newspaper had on the same day reported how irate commercial Tricycle ‘Keke’ Riders allegedly in cahoot with hoodlums, set ablaze Edem Road Central Mosque and demolished Barracks Junction Mosque, both at Nsukka, Enugu state, over an altercation that happened between an Igbo Commerical Tricycle ‘Keke’ rider and a passenger, a Hausa lady.

‘If not for ignorance and sheer hatred, what concerns a mosque with two people fighting outside?’, was a mind-boggling question that came to the mind of Adams Sulaiman, a social media user, who joined thousands of netizens to condemn the burning and demolition of Muslim places of worship in several parts of South South and South East of Nigeria.

In recent weeks, there have been series of coordinated attacks on Muslims (especially the Hausa community), places of worship and their investments in the region predominantly populated by Igbo Christians. Many of these attacks, unfortunately, have gone unreported.

Investigations carried out by Muslim News showed that before the Nsukka attacks on Saturday, the popular Orlu Central mosque in Imo state was set on fire by suspected members of the proscribed group – Indigenous People of Biafra (IPOB), who hid under the guise of #EndSARS protests to wreak havoc on Muslims.

During the attack which lasted for two days (between Tuesday and Wednesday, October 20 and 21), one Muslim was killed and four others, including the Mosque’s Assistant Imam, sustained various degrees of injuries.

Igbo Muslimah, Aishat Obi visited the burnt #OrluMosque in Imo, where #IPOB killed 1, injured 4 Muslims during the #EndSARS protests. We call for calm, and seek @PoliceNG @HQNigerianArmy to protect our brethren in the South-South/East. Watch full video >> https://t.co/nbw4aA8yx5 pic.twitter.com/olmTnjCGNQ

While many Muslim netizens were condemning the attacks and slamming the  media for keeping mum — unlike the Lekki toll gate shootings that have enjoyed unprecedented local and International media coverage, one Nwoko Nanta on Facebook defended the arsonists, saying:

“Orlu Mosque was built by Igbo Muslim and burnt by Igbo Christians. It is an Igbo affair. Yoruba and Hausa Muslims should stay away from our problem. We will still solve it among ourselves.” 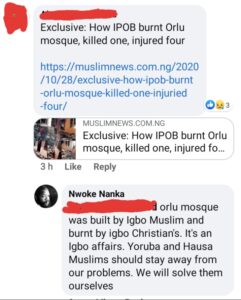 As the attacks on Muslims was going on in Orlu, Imo state with defeaning silence from the Nigerian media, the outlawed group IPOB, inflicted another catastrophic attack on the Hausa Muslim community in Port Harcourt, Rivers state.

Ten Muslims including Yahya Shittu, the son of the Seriki Hausa community at Eleme, Alhaji Attahiru Shittu, were murdered in cold blood. The Muslim community said the attack was carried out by the terrorist group – IPOB during the #EndSARS peaceful protests that turned violent across the country.

Although the Nsukka Mosques incidents was eventually reported by some top mainstream media including The Punch, Daily Trust, about 48 hours after Muslim News’ exclusive story, the two attacks — in Orlu and Port Harcourt didn’t get mentions in the Nigerian media as at the time of filing this report on Tuesday, November 3.

“It’s extremely sad that no mainstream media house, as far as I know, has reported this”, Olasumbo Nojeem Jimoh spoke up, after reading Muslim News’ exclusive reports on the killing of ten Muslims in Port Harcourt. 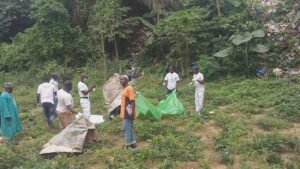 A cross-section of Nigerian Muslims have therefore launched a campaign on social media with different hashtags #Igbomuslimlivesmatter,  #EndkillingofMuslims #MuslimsLivesMatter, calling on local and international media and Non-governmental organisations to investigate the killing of their brethren in the South South and South East geopolitical zones.

“If the killings and destruction of Hausa community had happened in Southern Kaduna (a Christian dominated community) in the North, all the media houses in the country would have carried the news as screaming headlines and it will be the trending topic of discussion for several months with anarchists alleging a spurious ‘islamization agenda. These sad incidents happened for close to two weeks now and this is the first paper (Muslim News) that carried the news.”

Is it true that you have been funded to defend other causes against Islam and the #Muslims? If not, why have you not responded to the cries of the oppressors who have been tagging you, notifying you about the killings of Muslims in Orlu, PH? during #EndSARS pic.twitter.com/hQC6ZfPlXG

As at the time of filing this report on Tuesday, November 3, Muslim News checks revealed that no medium has independently done a story to unravel the truth of the killing of Muslims in the South South and South East regions of the country.

However, the only thing some of the media outfits such as Daily Trust have done, was to publish the press release of the Sultan of Sokoto-led Nigerian Supreme Council for Islamic Affairs (NSCIA) that raised an alarm over the attack on Muslims with the headline #EndSARS: Muslims Under Attack In South-South And South-East – NSCIA as published on October 23.

Some media outlets – both mainstream and online, also published the press release by Muslim Rights Concerns (MURIC) whose Director, Prof Lakin Akintola condemned the killings as he also demanded justice for the victims.

Muslim News findings revealed that several Nigeria media outlets, including Premium Times (PT), often regarded as the bastion of investigative journalism in Nigeria, had earlier on October 26 reported how IPOB “invaded Oyigbo Local Government Area” to launch what the Commissioner of Police in Rivers State, Joseph Mukan described as “senseless and mindless attacks on the Area Command, Oyigbo and Afam Police Stations, and burnt down the three stations.”

Evidence gathered by this medium showed that PT and some other media acknowledged in their reports that lives including that of the police officers were lost and property, including police stations, were set ablaze during the “senseless and mindless attacks”. Unfortunately, they provided no information about the 10 Muslims who were assassinated during the same attacks.

Neither the security agencies nor Governor Nyesom Wike publicly admitted that the Muslim community in Port Harcourt lost their members and property worth millions of naira were destroyed during the purported #EndSARS protests in any of the news reports. What the media later did was to publish another news on October 29 that the Governor had signed an Executive Order proscribing IPOB as a terrorist organisation.

In the PT story, for instance, with headline “Wike signs Executive Order proscribing IPOB in Rivers”, the Governor was only quoted to have “maintained that Rivers State remains the home to all tribes and ethnic nationalities”, without acknowledging that one of the ethnic groups, the Hausa Muslim community and indeed the Muslim community, were brutally targeted and attacked, its members were killed and properties destroyed.

While the Nigerian media and International non-governmental organisations such as Amnesty international have been at work, bandying allegations and trying to unravel what truly happened at the Lekki Toll-gate during the #EndSARS protests where conflicting number of people were said to have been ‘massacred’, the Muslim community released names and pictures of 10 victims, including the three persons that were said to have been burnt beyond recognition by the outlawed terrorist group.

See difference. Names were mentioned but for so called lekki MASSACRE no names or relatives mentioned by DJ switch & others…our mumu must do https://t.co/CEgiGaVJp8

These revelations led Muslims to express their disappointment at the hypocrisy and double standard of the Nigerian media towards Islam and the Muslims. Adekunle Ajayi, tweeted that unlike the “so-called Lekki Massacre” which has no names or relatives of the victims, the names of the victims of Port Harcourt were documented, yet, the media still kept mum on the arson and killings in the South South and South East.

Another user, @Yodike tagged @AmnestyNigeria asking if the victims of the Port Harcourt and Imo #EndSARS protests did not fit into her description of human rights abuse, asking, ‘Lekki massacre ain’t it? Another handle @Sartaj_11 was shocked by the reports of killings of Muslims in PH, saying, “Here is where the actual massacre took place #OyigboMassacre. But, no one will hear this. It will die like many others. Imagine this scenario from the opposite direction. #OyingboMassacre.

While waiting for the media to do the needful and justice be served, the Muslims have been urged to remain calm, law-abiding and not take the law into their hands.

This was the submission of the Chairman Muslim Council of Imo State, Prince Basheer Uwakwe , who said:

“As your Chairman, my position is to ask you to be patient and positive. We have been provoked before and now in the same Mosque in Orlu, but we must remain calm and look up to Allah who is in control of our affairs.”

An Ndigbo Muslim woman activist, Aisha Obi also called on government to protect the lives and property of Muslim minorities in the South-South and South-East, adding, “Government should also protect Christian minorities in the North and elsewhere. All lives matter.”

A social media user, Isah Abubakar concluded by urging Muslim brothers to be law-abiding and prayerful. He said:

“Reprisal attacks will only escalate the situation and put more lives in danger. Allow security agencies to do their job.  Behind every difficulty there’s ease. May Allah protect the Muslim minorities in the South East and South South geopolitical zones.”