by Muslim News Nigeria
in Hijab
4

Following the government’s pronouncement of reopening of the 10 affected schools in Ilorin on Wednesday, March 17, a section of Christians have forcefully blocked the entrance to one of the schools, Surulere Baptist Secondary School, Ilorin, preventing Muslim pupils from entering the school premises.

There is also a report of similar resistance at C&S College, Sabo Oke, Ilorin by some Christians who insisted that no student with Hijab would be allowed to use Hijab in their schools.

The church members reportedly dressed in white sultana and caps, laid siege to the school gate and prevented Muslim pupils from entering, hours after Kwara government announced the school reopening.

Speaking on the development, Mr. Michael Oyepo, PTA chairman of the school, insisted that they will not allow students in Hijab in flagrant disregard of the government position upholding the right to use the head covering.

Recall that the 10 affected schools in Ilorin, the Kwara State capital, were earlier shut following steps taken by these same persons barring Muslim students using Hijab in the schools.

Muslim News correspondent at the protest ground in Surulere area of Ilorin on Wednesday saw the Christian demonstrators dancing as they displayed placards with different inscriptions such as ‘No Hijab in Baptist Schools and all mission/grant-aided schools’, ‘Otoge, give us back our schools, among others.

But contrary to their demands, the State government had earlier stated unequivocally that there are no mission schools in Kwara State.

The Chief Press Secretary (CPS) to Governor AbdulRahman AbdulRazaq, Mr. Rafiu Ajakaye said in an interview with TVC that the Kwara State education law recognises only two categories of schools, namely, public and private schools, adding that, “We do not have schools that are categorised as missionary schools in Kwara.”

As at the time of filing this report by 8:59am, Muslim News also gathered that St. Anthony Secondary School, Offa Road remained under lock and key, with few teachers and students awaiting the reopening of the school.

Meanwhile, security agents have swung into action, taking steps to disperse the protesters and put the situation under control. 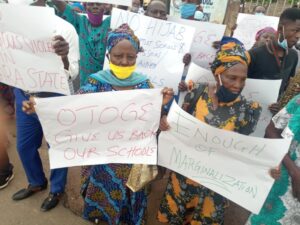 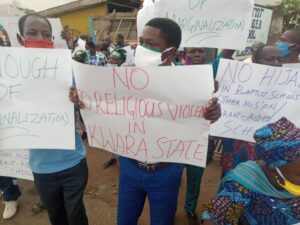 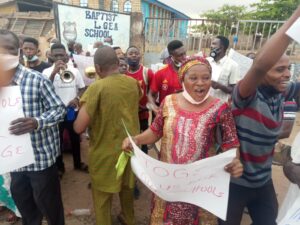 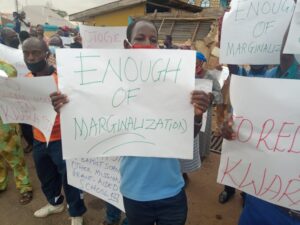 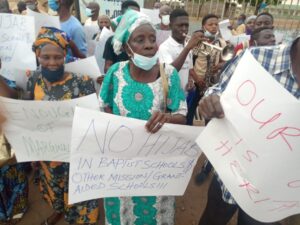 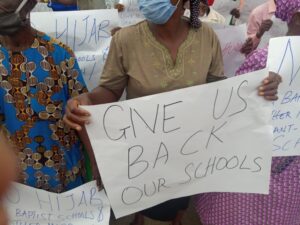