by Muslim News Nigeria
in Features
1

The attention of the Nigerian Supreme Council for Islamic Affairs (NSCIA) has been drawn to the insinuations and vituperations that trailed the shortlisting of 20 Justices-designate by the Federal Judicial Service Commission (FJSC). It would be noted that except it is compelled to do so, the Council has often resisted joining issues with the Christian Association of Nigeria (CAN) as a matter of principle. This is because CAN has proved, times without number, its morbid hatred for Islam and Muslims, its remarkable capacity for destructive mischief, its dexterous use of scurrilous propaganda and its predilection for always being economical with the truth as part of the sinister strategy of heating up the polity anytime a Muslim is at the helm of affairs.

It would be recalled that not too long ago, the Council was forced to expose the marginalisation of Muslims in the successive Boards of the Nigerian Television Authority (NTA) after CAN made one of its wild and mendacious allegations of Christian marginalisation. It is actually a wicked strategy and unholy tactics to accuse Muslims of marginalisation though Muslims are the ones being deliberately and systemically marginalised by Christians, who continue to consolidate on the colonial agenda of emasculating Muslims. However, NSCIA would not allow the serial falsehood of CAN and its propensity for character assassination of people on the basis of their religious identity to stand because truth is irrefragable.

To wit, the intransigence of CAN is playing out again in the deliberate distortion of the issues surrounding the shortlisted 20 Justices-designate. The grouse of CAN, as amplified by some hagiographers masquerading as opinion leaders, is that 13 of the 20 recently shortlisted Justices are from the North and are Muslims. Though the President of the Court of Appeal, Justice Monica Dongban-Mensem, on her honour stated unequivocally that the procedure of the appointment followed “due and usual process” and that the recommendation “was done without any preference for tribe, creed or association”, mischief makers, ethnic jingoists and religious bigots resorted to blackmail.

In venting their spleen against the development, CAN especially and its apologists choose to ignore the fact that Muslims are a minority in the religious composition of the Court of Appeal. In a statement filled with bile and bigotry, the so-called religious body expressed its “feelings of sadness, disgust and anger at the insensitivity demonstrated by the FJSC in compiling the list. It seems undeniable that the recklessness displayed by the FJSC suggests a steady and gradual descend (sic) to (sic) a process of Islamising the Judiciary of Nigeria.”

The unassailable truth is that Justices of the Court of Appeal (JCAs) are 70 but the North with 19 States has 34 while the South with 17 States has 36. The South thus has more JCAs than the North. Meanwhile, out of the 36 JCAs from the South West (where Muslims are a majority), South East and South South (in both of which Muslims have considerable indigenous populations), all the JCAs are Christians except for Justice Habeeb Adewale Abiru of Lagos state and Justice Mistura Bolaji-Yusuf of Oyo state. But in the three geo-political zones of the North where Muslims are predominant, there are 34 JCAs out of which 15 are Christians. In other words, the North East has 4 Muslim JCAs and 7 Christians, the North Central has 6 Muslim JCAs and 7 Christians while the North West has 9 Muslim JCAs and 1 Christian JCA. Of the 36 from the South, only 2 are Muslims. The names and details of the Justices are as follows: (see the tables in the photos)

However, the three geopolitical zones of the South have only two Muslim JCAs while the three geopolitical zones of the North have 15 Christian JCAs! Who is wickedly intolerant?
The cacophony of Christian marginalisation that constitutes the sing-song of CAN is a blatant lie, a deliberate distortion and a devilish strategy of shedding crocodile tears or crying while flogging Muslims with bare-faced oppression and systemic repression in Nigeria.

Though religion preaches love, honesty, sincerity, tolerance, good neighbourliness and kindness, among other virtues, CAN has succeeded in creating a Nigerian version of Christianity which is anchored on morbid hatred, undisguised dishonesty, caustic insincerity, religious intolerance, perennial hostility and outright wickedness. If CAN has its way, it would annihilate Muslims from Nigeria but one billion CANs of calumny unleashed against us cannot extinguish the light of Islam here and elsewhere, even if they try it!

This is the same strategy underpinning the needless hubbub over hijab in Kwara state and elsewhere. It is given that the right to hijab is constitutionally guaranteed. However, to CAN, constitutionality does not matter where intolerance festers and it has resorted to toe the path of violence. Section 38, Subsection 1 of the Nigerian Constitution (as amended in 2011) states categorically thus:

Every person shall be entitled to freedom of thought, conscience and religion…(either alone or in community with others, and in public and or in private) to manifest and propagate his religion or belief in worship, teaching practice and observance; and Subsection 3 states that: No person attending any place of education shall be required to receive religious instruction or to take part in or attend any religious ceremony or observance if such instruction ceremony or observance relates to a religion other than his own, or religion not approved by his parent or guardian; while subsection 4 further states that: No religious community or denomination shall be prevented from providing religious instruction for pupils of that community or denomination in any place of education maintained wholly by that community or denomination.

The schools in question are public schools which are financed and administered by the state government. It is even ironical that a number of the female teachers in these schools use hijab. Would CAN also ask the state government to disengage all the ‘Hijabi teachers’ in the affected schools? The matter was put to rest in Suit CA/IL/49/2009 where the appellate court in Ilorin ruled unequivocally that the use of hijab by female Muslims qualifies as a fundamental right under Section 38 of the Constitution.

Also, in AbdulKareem vs Lagos State Government (2016) 15 NWLR (Pt 1535) 177, the Court of Appeal further reaffirmed its decision in Appeal No CA/IL/49/2009 and upheld the unalloyed right of a female Muslim to wear hijab to school. However, CAN argued that the use of hijab in the affected schools will “cause discrimination and allow terrorists to easily identify our children and wards.” What a jaundiced argument! Assuming that was true, would the withdrawal of all the Hijabi students in the affected schools not make the children to be more easily identified?

It therefore beats imagination that CAN can be so blinded by Islamophobia as to promote anarchy in the land by denying willing Muslim girls the right to hijab in state-funded schools in Ilorin of all towns, repaying the tolerance of the Muslim hosts with intolerance! Even in the West, willing school girls and professionals are accorded their rights to hijab and a Baptist College in Australia less than two years ago changed its dress code to accommodate its Hijabi student. However, in Nigeria, CAN leaders appear to practise a different version of Christianity and they undermine democracy by violating the lawful judgements of competent courts of law.

For the purpose of hindsight, Muslims have over the years been bearing their persecution and marginalisation in Nigeria with religious patience and dignified forbearance without the NSCIA heating up the polity, occupying public spaces or inciting confrontation with constituted authorities. Right-thinking Nigerians are to ponder what CAN would have done if Christians were to be at the receiving end illustrated with just the following six instances:

• During the regime of Chief Olusegun Obasanjo between 2003 and 2007, there was not a single Muslim Minister from the entire South-West, South- South, South-East and North-Central, except one Muslim from Nasarawa state.

• In the period between 2010 and 2013 during Dr Goodluck Jonathan’s regime, no single Muslim Minister was appointed from the three geopolitical zones of the South.

• The National Conference of 2014 convened by the Government led by Dr Goodluck Jonathan was lopsidedly constituted that Muslims were just about one-third of the entire delegates.

• The Federal Government recognises and legitimises the Christian worship days of Saturday and Sunday as official work-free days in Nigeria.

• The Central Bank of Nigeria pays public funds running into hundreds of millions of Naira to CAN every year under one guise or the other.
As far as those who run the affairs of CAN are concerned, Nigeria may as well descend into war since in their demonic calculations, they will dominate Muslims with the support of their foreign friends and turn Muslim lands to a vast wasteland as obtainable in some Muslim-majority countries. They fail to realise that the war they are intent on dragging Nigeria into ultimately does not decide who is right but who is left and that no soldier in the real sense ever survives a war as something dies in him while fighting.

It is in this respect that Muslims in Nigeria and the South in particular are warned to be circumspect in being dragged into the ethnic debate of some phantom states to be created out of Nigeria by some irredentist agitators. It is clear to the blind and audible to the deaf that the script is a design to further repress Islam and oppress Muslims in the South and turn them into second class citizens in their own fatherland. Behind the mask of ethnicity that the propagandists wear to deceive the unwary is a religious agenda to obliterate Muslims from the socio-political life of the entire South where hijab would be criminalised and the courts of law would be disobeyed at will by the so-called elite, as being witnessed in Kwara state.

Muslims who listen to the deceit of ‘those-who-wish-others-evil’ or the rants of their megaphones are bound to regret if they continue to toe their divisive ethnic and religious propaganda. Muslim opinion leaders, especially politicians, writers and journalists, are to be wary of being subliminally drawn into what will potentially destroy them. You cannot trust those who disobey rightful court orders to guarantee your basic rights when push comes to shove!

It is against the backdrop of the foregoing that the Nigerian Supreme Council for Islamic Affairs (NSCIA) reiterates its earlier call that the Federal Government should urgently conduct a full-scale religious census of the entire workforce of its Ministries, Departments and Agencies (MDAs). The statistics would be helpful as it would reveal the states of origin and religious affiliations of the Nigerian workforce. Muslims can no longer tolerate the psychological terrorism of those whose stock-in-trade is campaign of calumny and bigoted propaganda anytime a Muslim happens to be at the helm of affairs in Nigeria. This is the way forward at this time as the vilification of Muslims by CAN can only be redressed by publishing the statistics and letting the world know who is marginalising who. 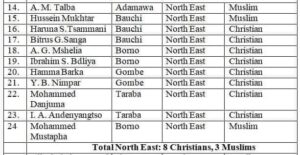 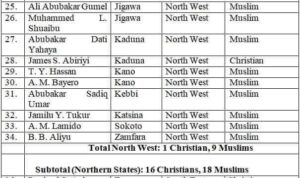 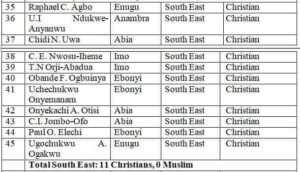 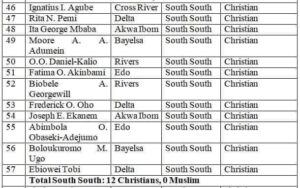 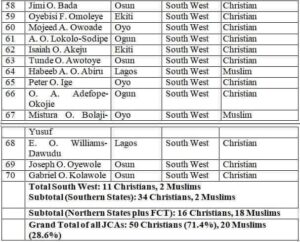