For the second time in a month, one of Nigeria’s leading charity organisations, Zakat and Sadaqat Foundation has empowered more economically disadvantaged Muslims in Edo State.

The exercise tagged ‘Zakat Distribution Ceremony (ZDC) for the Year 2021’, was held recently, with no fewer than 14 persons benefitting from the distribution of the sum of four hundred thousand naira.

The beneficiaries, including widows who were mostly petty traders, received economic empowerment funds, as well as two persons who received funds for medical intervention among others.

Speaking on the event, the Executive Director of the Foundation, Prince Sulaiman Olagunju, noted thst there is need for the establishment of a system that see to the welfare of the less privileged.

In his words, he said “the institutionalisation of a system that cares for the wellbeing of the less privileged, is a sure and guaranteed means of ending the challenges faced by countries of the world, especially the challenge of poverty eradication which seems intractable.

“The government need to start looking at Islamic charity windows, and provide the enabling environment, so all Muslims who are supposed to pay Zakat can do so, and this will guarantee that there is enough to distribute to the less privileged, thereby bridging the poverty gap and lifting people out of poverty.

“Zakat-l-fitr is an important part of the Islamic faith and it is all about providing for the needy in our midst and a way of cleansing our fast of all forms of misdeeds”, he noted.

He also enjoined well-to-do Muslims to pay their Zakat and Sadaqat promptly, as it helps to purify their wealth and ensure food security and end poverty in the society.

In his address, the Manager, Operations, Alhaji Maaruf Ahmed noted that the foundation collaborated with Human Appeal, UK as an effort to deepen its charity.

He noted further that “This year, we have provided food items, a live chicken and the sum of 5,000 naira to each of the 30 benefitting families in Edo and 19 other states across the federation, while children were not left out, as for the first time ever, a total of 95 children were given gift boxes in Benin in the spirit of the celebrations. This is a novel endeavour as it is the first of its kind in Nigeria, as we hope to sustain the initiative”.

Also speaking at the event, the Administrative Officer of the foundation, Mallam Abdul Rasheed Jatto sued that the payment of zakat is an important injunction in Islam such that everyone is happy and able to celebrate during the eid. 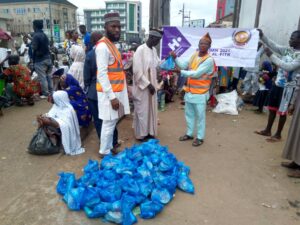 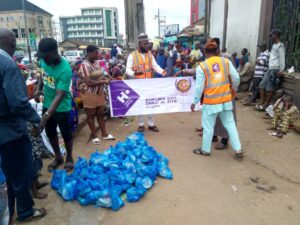 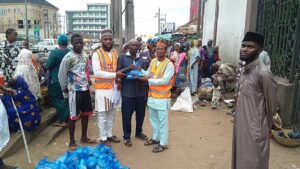 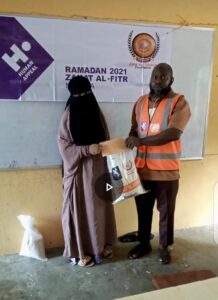