It’s ignorance for anyone, especially a Muslim, who is conversant with the happenings in the Middle East to mock the Palestinians, saying he or she doesn’t know why they’re celebrating their victory, after Israel was forced to end their 11 days of genocide and destruction in Palestine.

There is no crime in asking, after all, Allah says we should ask the people of reminder if we do not know, but ridiculing the oppressed Palestinians, lori aimokan (out of sheer ignorance), is disgusting and nauseating.

Sadly, some ignorant Muslims, or maybe they know but are just being mischievous, have been saying, Hamas, the Palestinian resistance group ‘pulled for it (the latest crisis)’ and ‘begged for ceasefire’ to use their exact phrase. The people spreading these lies are nothing but enemies of Islam, even if they claim to be Muslims.

How could a Muslim say Hamas pulled for it when in reality, Hamas only retaliated against Israel’s invasion of Masjid Al-Aqsa during the blessed month of Ramadan and the eviction of Palestinian residents from their ancestral homes in Sheikh Jarrah district of East Jerusalem.

Of course, the mockers of Palestinians’ victory will see nothing wrong in the Israeli government asking the residents, the original owners to vacate for Jewish settlers who just returned from US, Poland, Canada, after all, they’re the first to tell Palestinians to migrate to ‘God knows where’. 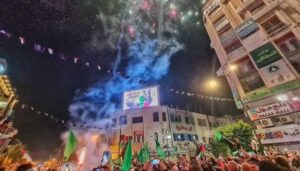 As for the ceasefire, it was brokered by Egypt and accepted by Israel, and later Hamas. This story is everywhere on the internet. So, the insinuation that Hamas begged for ceasefire is nothing but a figment of the imagination of purveyors of those lies.

For any good observer of happenings in the region, war or no war, Palestinians’ lives mean nothing to the apartheid regime in Israel. On a daily basis, Palestinians die. Many youths, including children (minors) have been arrested and detained without trial. Their lands have been confiscated and means of livelihood – farming, fishing, etc destroyed by this same regime. All these violations are not new to them. They’ve been living with it for decades.

The over 250 lives lost during the 11-day Israel pogrom died neither as cowards nor in vain. They died while standing up against Israeli sponsored terrorism, which has been on for decades. Standing tall against the terrorist Israeli regime and even making them to accept the ceasefire despite their arsenal is a victory of sorts.

Or what does the world expect an oppressed person who has been pushed to the wall to do? Fold its arm or wait for help that might not or will not even come from his disunited and divided ummah? That the Hamas and the Palestinians stood up against tyrannical regime and it was made to say, ‘I am not fighting again’, was a victory. 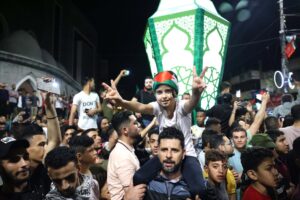 In fact, if the ceasefire didn’t take place, there were indications that Israel couldn’t have stood 5 more days of the war, because the Arab citizens (not the betrayers in government), I mean, their Arab brothers in the neighbouring countries, particularly in Egypt would have been in Gaza; the protesting Jordanians would have been in the West Bank, the Lebanese would have been in the Northern part of Palestine to defend their heritage.

Also, it’s a victory for Palestinians, especially in Gaza, who saw Hamas’ improvement in the use of weapons, from crude bombs to long-range rockets. Admittedly, the Palestinian resistance group doesn’t have the kind of weapons Israel has in its arsenal but it was able to fire significant number of rockets into Israel, hitting deeper into some strategic locations and with greater accuracy than ever before.

Hamas’ continuous firing of rockets into Israel, unlike before, made about 1,500 firms and 400,000 workers in southern and central Israel to stay at home, making Tel Aviv to lose a whopping $368 million, compared to $62 million loss in Gaza, during the May 10 to 21 Israeli aggression.

In fact, many Israeli and western propaganda media were also stunned, after seeing the magnitude of Hamas’ bombings, describing it as “unprecedented”. Even the Israel Iron Dome couldn’t intercept many of Hamas’ rockets, and the message is simple, before you attack Gaza, the Israeli government would have a rethink in the future.

Evidently, as it is now, Hamas is the protector of Aqsa and it inspires many Palestinians to join in defending Muslims’ third holiest site, since the leadership of the OIC, Arab League have failed them. Although, the Palestinian President Mahmoud Abbas is recognised internationally, many Palestinians are deeply dissatisfied with his performance, especially his ‘silence’ against zionist, who continue to evict Palestinians from their own homes and ancestral lands, right under his nose, yet, he couldn’t stop them from bringing more Jewish settlers. 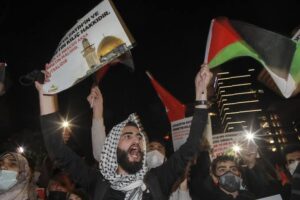 Abbas cancelled parliamentary and presidential elections – which would have been the first in 15 years, expected to hold in May, and you know why? He will lose to Hamas. All Palestinians know this, except the misguided agents of the Zionists among the Muslims in every part of the world, who continue to see Hamas as nothing but a terrorist group.

As it is now, Gaza under Hamas is the only independent region in Palestine, despite being under siege since, it has survived, evellallah (with the help of Allah), standing tall to challenge the imperialists.