Hundreds of Muslims in Oyo State have staged a protest to support Palestinians and condemn the recent havoc wreaked on them by Israeli forces.

The protesters who carried placards with various inscriptions like “Israel is a terrorist State”, “Free Palestine, Stop the Killing”, “This is not a conflict, it’s genocide”, “Free Palestine, Resist Israel apartheid,” staged the peaceful protest at the frontage of Alade Event Centre, Sanyo, Ibadan after a solidarity conference held earlier with the theme “Al-Aqsah Invasion: The Ummah and the Signals”.

Earlier, during the conference, former Speaker of Osun State House of Assembly, Professor Mojeed Alabi called on all countries of the world to unite and condemn the injustice being perpetrated by Israel against Palestine.

He said the situation in Palestine was a case of injustice against humanity and it was necessary for all nations to take active steps and put pressure on Israel for peace to reign for Palestinians in the middle East.

Professor Alabi further called on people to not only canvass human rights in their individual nations, but to ensure that it applied to all manners of people wherever they come from.

“The issue of crisis in Arab and Jewish state in Palestine has become something that is troubling the whole world.

“Whatever happens in any part of the world has the tendency of affecting other parts of the world, the people in the middle east who are facing the heat are human beings.

“As a member of United Nations that subscribes to the idea of human rights, we should try as much as possible as a nation to uphold human rights for all manners of people,” Alabi said.

He said that the crisis in Palestine was not a religious problem, adding that both Muslim and Christian Palestinians are facing the same problem.

The Professor of political science called for boycott of products from Israel by Nigerians as such is a way of expressing displeasure on the injustice being meted out to Palestinians.

“Yes, blockage. In international relations, blockage which you called boycott is a weapon.

In a remark, President of Palestine Community in Lagos, Shaikh Ramsy Ibrahim, said Israel has never accepted the existence of the Palestinian and had been treating them unjustly for the past 72 year.

He commended President Muhammadu Buhari for always speaking in support of Palestine in the international community and appreciated Nigerians for their solidarity.

The Coordinator of Al-Qudus Foundation, Ibadan Branch, Barrister AbdulRasheed Attah said the right of Palestine is being violated regularly by Israel and the world needs not to close their eyes to the happenings in that country for peace to reign.

He called for justice all over the world stressing that Israel has violated over 40 UN resolutions and nothing has been done to her, whereas, Sadam Hussein and Muhammed Gadafi in Libya did not violate more than 3 to 4 UN resolutions and they were severely dealt with.

“This is injustice of the highest order. Does it mean Isreal is above the law?”, he queried.

Other speakers who condemned the inhuman treatments on Palestinians called for prayers for success for the oppressed. 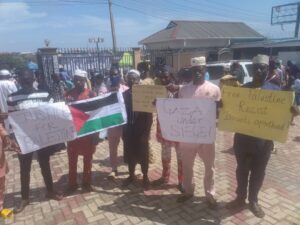 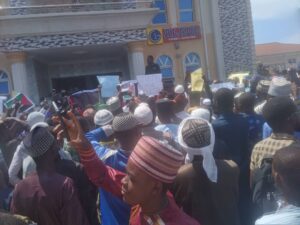 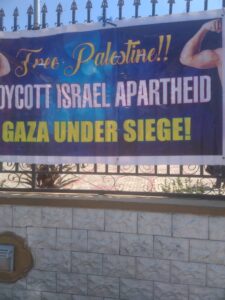 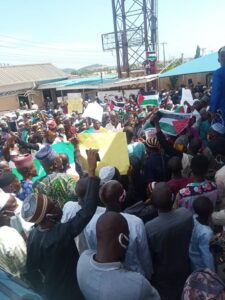 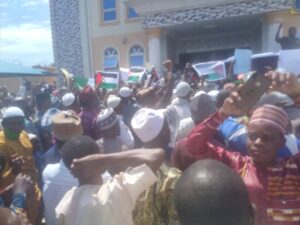