▪︎ The People's Governor has won 13 different awards, including Ngerian Muslim Personality of the Year 2019, within two years

Blueprint Newspapers, one of Nigeria’s news organizations with more than 10 years experience, has on Thursday, declared Borno Governor, Professor Babagana Umara Zulum, as Nigeria’s “Person of the Year” 2020.

That category was the newspapers’ highest routinized awards as it combines being uniquely selected from combination of leaders in both the private and public sectors and in all sectors of Nigeria.

Zulum was presented that award at a well attended 10th anniversary event of Blueprint Newspapers which had high level guests including Senators led by the Senate President, Senator Ahmad Ibrahim Lawan, traditional rulers led by Etsu Nupe, Alhaji Yahaya Abubakar, top Government officials and top executives from Nigeria’s newspapers and other media industry. The event held at the congress hall of Transcorp Hilton Hotel in Abuja. 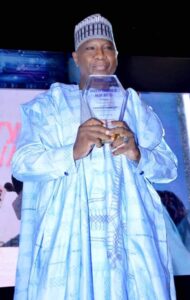 Zulum was represented by his Chief of Staff, Professor Isa Husaini Marte.

Former President Goodluck Jonathan was honoured with a special award as icon of democracy, while some Governors were honoured for their efforts on specific areas.

Thursday’s award was coming few weeks after Governor Zulum was awarded by the Nigerian Labour Congress in recognition of his policies and programmes that support workers and pensioners in Borno State, part of which is his consistency on payment of salaries and unprecedented release of over N15 billion so far, to clear backlog of pensions.

READ ALSO...  All eyes on Saudi Arabia as 2 million gather in Makkah for Hajj 2019 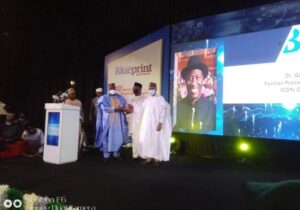 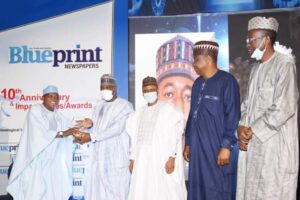