Prof. Zulum is the Nigeria Muslim Personality of the Year 2019

The Governor of Borno State, Professor Babagana Umara Zulum FNSE, MNI, has been named the Nigerian Muslim Personality of the Year 2019 by Muslim News, Nigeria’s most authoritative Islamic newspaper.

The announcement was made at exactly 5am Nigerian time on Friday, January 17, 2020 by the Publisher of the newspaper, Mallam Rasheed Abubakar.

Professor Zulum’s emergence as the Muslim News’ Nigerian Muslim Personality of the Year is not surprising going by his unique and excellence in governance exhibited since he was sworn in barely a year ago as the governor of Borno, a north eastern state, the hardest hit by the Boko Haram terrorist group.

Zulum, a Professor of Soil and Water Engineering replaced the Sultan of Sokoto, Alhaji Muhammad Abubakar Saad III who won the most-coveted award in 2018.

The Sultan, who also doubles as the President-General, Nigeria Supreme Council for Islamic Affairs (NSCIA), was recognised for his consistent advocacy for peace and unity among the Muslims in Nigeria, a gesture he has continued to sustain.

In a press statement signed by Rasheed Abubakar, the publisher of Muslim News, the Governor has done pretty well in the area of security, which he sees as his number one priority and of course in the area of education, health, transportation regulations, economic and humanitarian support for citizens of different local governments within the state.

As a former Commissioner for Reconstruction, Rehabilitation and Resettlement under former Governor Ahmed Shettima, Prof. Zulum has continued his rebuilding exercise of hundreds of communities destroyed by Boko Haram and likewise, finding a safe haven for millions of citizens displaced by the attacks which has since continued albeit drastically curtailed by this current administration.

Abubakar said his medium identified Governor Zulum’s commitment in nipping the debilitating activities of the Boko Haram insurgent group in the bud and his drive towards socio-economic development with his laudable actions and policies as factors that made him deserving of the award.

According to him, ‘We at Muslim News resolved to appreciate the Governor of Borno State, Professor Babagana Umara Zulum, a devout Muslim, with this prestigious award for his fierce stand against the nefarious and anti-Islamic activities of Boko Haram in Borno State; for ensuring important developmental actions in every nook and cranny of the state; and for his excellent service across all socio-economic strata in the state vis-a-vis the civil servants, market women, artisans, retirees and even soldiers on the warfront.

“The thorough bred Nigerian professor, despite the daunting challenges posed by the Boko Haram insurgency, has continued to push socio-economic developmental strides on all fronts. His years of service in different governmental capacities in Borno state were characterised by diligence, hard work and commitment.

“Zulum has declared a total war against the insurgent Boko Haram ravaging the nooks and crannies of Borno State. He introduced and recruited more hands in the CJTF with an increased salary in a bid to see the end of the Boko Haram insurgency.

“His developmental policies are well felt across the strata of the state. From civil servants to artisans to market women and even the retirees, Zulum has impacted lives within this short period of his stay in office. He came out boldly declaring that his own political philosophy does not agree with the fact that payments of salaries and gratuity are achievements to boast of”, he said.

The publisher noted that the governor of Borno State, Professor Zulum is representing Islam well with his efforts geared at changing the narratives with respect to politics and governance in Nigeria.

Abubakar further disclosed that within the short period of his emergence as the Chief Security Officer of Borno State, Zulum has contributed immensely to the growth of Islam with his show of keen concern in Islamic education and Islamic affairs in general.

Abubakar, the author of the ‘Hijab and the Nigerian Press’ alluded to the immense contributions of Professor Zulum to Islamic awareness in Nigeria, noting that his packages for those who pursue Islamic education are laudable.

As a devout Muslim, he is a fervent believer in the power of prayers and in addition to the military’s approach to tame boko haram and its criminal activities, Prof. Zulum exployed the services of Muslim scholars both within Borno and Saudi Arabia to offer prayers for the state. He said, during one of his Umrah that, “We need prayers more than ever before; we are handling our problem from different approaches. Prayer is key to everything that we seek. We will continue to seek prayers from many fronts.” 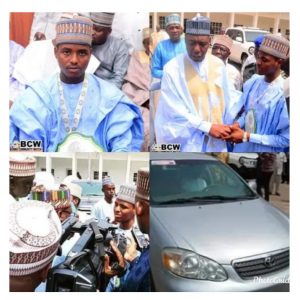 Abubakar recalled that the governor recently approved a full scholarship up to PhD level for the winner of the 2019 King AbdulAzeez International Qur’an Competition, Idris Muhammad Abubakar, an indigene of Marte Local government from the State, while promising to offer him automatic employment.

“The governor also rewarded the Qur’anic group council with five million naira for an astonishing performance and promised to extend such gesture to any indigene who distinguishes himself and makes the state proud, irrespective of political, religious or tribal difference.

“These, among other things, made him the overall winner of the Nigerian Muslim Person of the Year 2019. I congratulate the good people of Borno State,” Abubakar stated.