by Muslim News Nigeria
in IslamMed
0

Barely 24 hours after The Punch newspaper published and later updated its Islamophobic and biased headline, another medium has become the next culprit.

This time, it was a relatively unknown medium, franktalknow.com, owned by Olabisi Deji-Folutile, a former Saturday Punch Newspaper Editor.

Deji-Folutile was reportedly forced to resign, following the outrage that trailed the offensive cartoon of a man who purportedly desecrated a copy of the Bible, as published on the back page of The Punch, July 4, 2019.

Franktalknow.com had on Wednesday, June 16, published a breaking news of the Independent National Electoral Commission, INEC’s removal of 749 polling units from inappropriate places across the country.

Among the ‘inappropriate places’ mentioned by the Chairman, Prof. Mahmood Yakubu during the press conference included churches, mosques, shrines, among others.

But in its biased headline, the medium, conspiciously avoided mentioning churches, even as it listed mosques alongside shrines, and others. 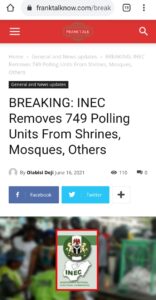 Likewise, in the 3-paragraph inside story, the medium didn’t mention churches as part of the inappropriate locations, whereas the Christian place of worship is also listed.

In another twist, the new Islamophobic medium in town, who listed mosques in its headline, didn’t mention the Muslim place of worship in the body of the story.

Some notable and other unpopular blogsites also used the misleading and biased headline of franktalknow.com.

See their screen-grabbed headlines below: 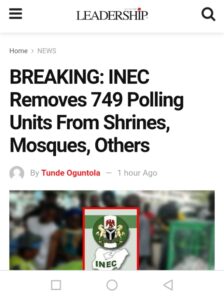 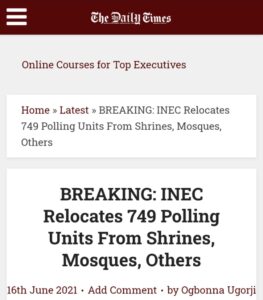 With the news report of this nature by some sections of the Nigerian media, Muslim News can authoritatively confirm, that the story is not only imbalance and biased; it is also capable of igniting needless debate of a purported Islamization of Nigeria by the administration of President Muhammadu Buhari.

Premium Times, which also reported the same news, used a more balanced headline to include churches, mosques, others.

In the report, Premium Times was more accurate as it gave the figures of the Churches location as 21, and Mosques as 6.

“Of this figure, 232 were removed from private properties, 145 royal palaces, six Mosques, 21 Churches and nine Shrines. The remaining 336 Polling Units were relocated for various reasons which include distance, difficult terrain, congestion, communal conflict, new settlements and general insecurity”, it wrote, in part.

Or instead of mentioning mosques or churches, ‘worship centers’ can be used, as seen in Daily Trust online headline. 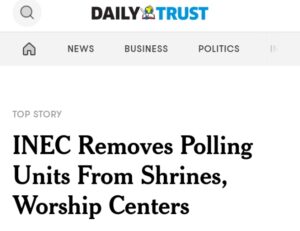 Some have observed that it’s only a mischievous medium or a publisher/editor that will omit churches in his story, when it is obvious that churches have more inappropriate centres than Mosques.

Muslim News findings revealed that it’s the same bias that often makes some Christian leaders to keep raising false alarm of the Islamization of Nigeria, even when the opposite is the case.

“As done by her former employer, since the game-plan has been exposed, Deji-Folutile should rather eat the humble pie by simply doing the needful. She should just go ahead to balance the story by updating the headline to include churches.

“She should take a cue from The Punch that later updated its controversial headline to include ‘Mosques, others’ in its ‘Church demolition’ story, published on Tuesday, June 15,” said, Elder Yinka Salam, a media guru based in Osogbo, Osun state capital.