Nigeria’s Minister of Interior, Ogbeni Rauf Aregbesola; Director, Public and Corporate Affairs, Voice of Nigeria, Abdurrazaq AbdusSalam and top Islamic scholars are among the dignitaries expected to grace the 2021 edition of the Higher Institution Convention of Muslim Students (HICOMS).

The convention, holding between Friday, 2nd and Sunday, 4th of July at the Lagos State University, Epe Campus, Lagos, is organised by the Council of Higher Institutions (COHI), an organ of the Muslim Students’ Society of Nigeria, Lagos State Area Unit.

HICOMS is an annual convention of Muslim students from 20 institutions and campuses, including Universities, Colleges of Medicine, Polytechnics, Monotechnics and Colleges of Education in Lagos State.

The Coordinator of COHI, Abdulbasit Abdusalam made this known in a statement ahead of the convention themed, “Vision 2030: Setting Agenda for Muslim Students”.

He explained that during the convention, the Muslim youths would discuss germane educational and religious issues. 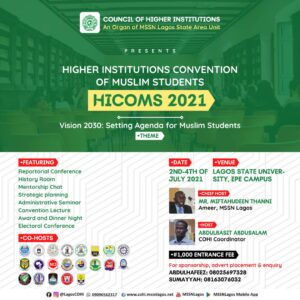 He said, “The convention is an annual event where we x-ray issues relating to education and religious performances on our campuses. This year’s edition is focused at strategically planning to be better Muslim students and also developing ourselves to be relevant in the nearest future.

“There is a need to have Muslim students excel in all ramifications so that we can be relevant for Islam, ourselves and the country.

“The early Muslims were good contributors to their communities and they were able to contribute meaningfully. To this effect, it is pertinent to learn from history, observe the present realities, set an agenda for ourselves as Muslim students and how we can contribute to national development.”

Abdusalam said one of the highlights of the convention is a Mentorship Chat between the former governor of Osun State, Aregbesola and participants.

“The minister will be sharing his wealth of experience in leadership and how youths can become better leaders.

“Aregbesola has occupied leadership positions in Lagos State (commissioner), Osun State (governor) and currently serving as a minister. It will be interesting to learn from him,” the COHI coordinator added.