– charges them to embrace teachings of Islam

The old students of The Subtle Schools organised an orientation seminar for its recently graduated primary school pupils, who are in the junior classes at the secondary level.

The orientation programme was held on November 6 at the school premises in Isolo local government area of Lagos State.

Muslim News findings revealed that the pupils were sensitised on academic excellence and the need for them to embrace the pristine teachings of Islam.

Speaking at the event on the theme; Scaling through the Unforeseen Tunnel, 2021 Best Teacher in Educational District IV, Mr Abdur-Raheem Adekoya emphasised that embracing and following the teachings of Islam is key to excelling academically.

“My fellow students, the religion of Islam is the total way of life. Embracing and strictly following the commandments of Allah and the teachings of Prophet Muhammad (SAW) is key to all forms of success. The comprehensiveness of religion makes it a perfect way of life, leading to success not only in this world, but also the world to come.

“There is a connection between your Islam and your academic and moral excellence. This is because Islam lays emphasis on attaining excellence in whatever we do. If you want to be a doctor, a lawyer, an engineer, a teacher and other professionals, be the best. The advice is just for us to put into practice whatever we have learnt and should continue to learn”, he emphasised.

In his welcome address, the President of the body, Najmudeen Mustopha Olorunwa noted the reason behind the programme is to revive the spirit of follow up on the graduates of Muslim schools in general, who have the tendencies to deviate from the laid down principles imbibed by those schools.

Citing numerous scenarios, Mustopha enjoined other Muslim schools and their alumni to stage the like of the programme, in order to save the entire Ummah. 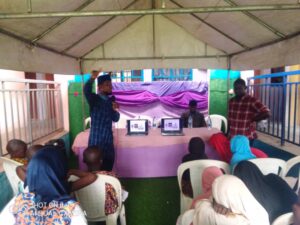 The event, which featured film show, games and lots more, was attended by the school PTA chairman, Dr. Yusuf Kolawole Oyewole, and the Headmaster, Mr. Mosadeoluwa, who as well represented by the school proprietress.

They commended the lecturer for doing justice to the topic, showering their joy and support towards the success of the programme.

The Subtle Schools is a Muslim school in the Isolo axis of Lagos state, which has produced primary school graduates for more than 15 years . The school, owned by Hajia Bashirah Yusuf has numerous records of excellence since its creation in 2002.