No Christmas where Christ was born

In Palestine, particularly in Beit Lahm, the cradle of Christ, Christmas is celebrated under the Israeli occupation.

Christians around the world simultaneously light up their Christmas trees to inspire joy and hope, and awaken the spirit of Christmas; but for Fouad, Christina, Iyad, Hanin, and many Palestinians in Beit Lahm, Gaza, and the occupied West Bank, this is going to be yet another sad Christmas.

A large Christmas tree and decorations do little to brighten up a Christmas celebrated under the Israeli occupation most notably in Beit Lahm. Like many occupied Palestinian cities and towns, Beit Lahm is deprived of having any guests, with the tree rejoicing no one but the city’s residents.

“I hope that this coming year brings about good, despite all the problems and challenges, as well as the corona pandemic and Israeli occupation,” a Palestinian elderly from Beit Lahm told Al Mayadeen English.

All that he can hope for in such days is a life full of goodness and blessings and a year that witnesses the end of the occupation.

The resilient Palestinian recalls how around this time of the year, the Israeli occupation forces hold Palestinian youth under administrative arrest.

“They would take Palestinians and throw them in prison, depriving the people of Palestine of joy.”

In an exclusive interview for Al Mayadeen English, he stressed that the Israeli violence would escalate during the holiday season in Gaza and the neighborhoods of Sheikh Jarrah, Silwan, and Al-Bustan, and in all of Palestine, not to mention the ongoing events and attacks across the occupied West Bank where Israeli settlers repeatedly assault innocent Palestinian people.

A Palestinian woman from Beit Lahm tersely stressed that Christmas is a special occasion where one gets to spend time with family and friends and visit wonderful Christmas holiday venues, as well as the Christmas market across Beit Lahm, but this is always not allowed in Palestine.

The Grinch that stole Gaza’s Christmas

Gaza has survived past crises, notably the latest Israeli aggression that has dampened its already critical situation, and residents are only surviving on hope.

Like all Gazans, Fouad has been suffering from a crippling Israeli siege since 2007.

The celebration of Christmas by Christians in Palestine is limited to very minimal events and attendees inside the church. Regardless, joy prevails and shines from within the church, and it is reflected in a cohesive Palestinian community.

Since March 1993, Palestinian residents of the Gaza Strip and the occupied West Bank (except for residents of Al-Quds) have been required to obtain permits from the Israeli occupation authorities.

“As a result, our joy remains incomplete; we constantly face the issue of permits in almost every mention of joy. We also face the difficulty of bringing the family together on our holidays as Christians, which makes us a little desperate and sad,” he added.

He heartfully shared his personal experience with Al Mayadeen English. Fouad’s parents live in Yafa, and he lives in Gaza. From 2007 till this very day, he has been denied any permit to visit his family. Eventually, he celebrates religious festivals online and on social media.

“The Israeli occupation is behind our suffering,” he concluded.

Whether it’s Christmas or any other day, there’s no joy whatsoever left.

“We hope that next year we will be able to visit the holy places together. On every holiday, we go through the same pain, as half of the family is allowed to visit holy places, whereas the second half remains in Gaza”, he added.

The young Palestinian told Al Mayadeen English that his friends are waiting for him to get a permit to celebrate holidays with them.

“Israel insists on depriving us of any chance of joy,” he said, sighing heavily.

Atallah Tarazi, a Palestinian from Gaza, said the Israeli occupation is innately inhuman and brutal.

“This is what [the notion of] occupation is; one people ruling over another, silencing the truth and repressing equality, and replacing justice with injustice. This takes its toll on all sects and groups,” he stressed.

Reiterating the endless suffering of getting permits, Atallah has only one wish which is to gain his freedom so that he can spend the holidays wherever he wants, “but I have no freedom; circumstances govern us,” he said.

On her account, young Palestinian woman Christina Al-Amash told Al Mayadeen English that some Gazans have family members who live outside Gaza, stressing that they would like to celebrate with them, but since Gazans live under an Israeli siege and they do not have permits, they are obliged to stay behind and celebrate in Gaza.

Christmas is a time of love, warmth – and often, huge family gatherings, yet not in occupied Gaza.

“It is wonderful that the whole family gathers during holidays in Beit Lahm because it is the land of Christ’s birth and a holy symbol for us. Some of us are able to travel to Beit Lahm, but most of us cannot”, Hanin Al-Jalda, a Palestinian woman from Gaza said.

She went on to say that those who cannot leave Gaza contact their families in Beit Lahm through the phone.

“A lot of us are not able to get out of Gaza. Our joy is incomplete. We are always at home, but we try to create a holiday spirit wherever we go, such as the cultural center. We make sure to decorate and light up our Christmas trees to celebrate and let the children rejoice and have fun, “she added.

Unity between Muslims and Christians
A Muslim family has held the key to one of Christianity’s holiest sites for centuries. This is more than just a matter of custom. It is the essence of Al-Quds, and it is part of what makes the Old City’s cultural and religious history so unique.

It is the key to the Church of the Holy Sepulchre. This Church is one of Christianity’s holiest sites. Thousands of pilgrims from all over the world visit it during the holidays. Few people are aware of the role Muslim ancestors have played in the history of this holy site.

“Christians and Muslims live together – one home, one family,” Jad from the occupied West Bank told Al Mayadeen English.

He stressed that Muslim brothers and sisters join Christians in Christmas celebrations.

No Christmas under occupation

Theodosius Atallah Hanna, the Archbishop of Sebastia from the Greek Orthodox Patriarchate of occupied Palestine, sent a heartfelt message, urging the whole world, most notably those celebrating this occasion, “to keep an eye on this land that was blessed with Christ’s birth.”

“When you celebrate Christmas, keep in mind that this land is under occupation and is struggling because of it. Palestine is enduring utmost levels of injustice, oppression, and tyranny,” the Palestinian Archbishop said.

In an exclusive interview for Al Mayadeen English, Hanna said we should call for the freedom, dignity, and retrieval of the stolen rights of Palestine.

“Remember that Christ was born on this land, the bleeding Palestine, which is awaiting all the free people of the world to side with it and support its oppressed people,” he stressed.

The Palestinian Archbishop wished the whole world a Merry Christmas and a happy new year. 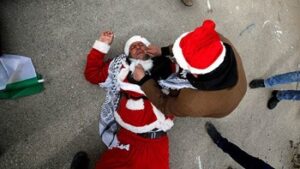 On Christmas morning 2000, Abed was so excited to meet Santa and get his gift. He was 10 years old, yet his joy was turned into a lifetime trauma.

“There is an image from my childhood that doesn’t leave my mind. The image of a Palestinian man wearing Santa’s costume. He was confronting the Israeli occupation forces with a stone, when he was shot by a live bullet,” he told Al Mayadeen English.

Abed also said that he will never forget the 39-day siege of the Church of the Nativity by the Israeli occupation forces, where Palestinians were shot and killed by snipers inside the church’s compound.

“Many pictures come to my memory about Christmas. The joy is incomplete despite our Christmas procession and our attempts to share the Christmas spirit. Nonetheless, we have a constant feeling of dread that something is looming on the horizon. The Christ is Palestinian, he is one of us. I call him the first Palestinian revolutionary.”

“Our biggest joy will be when Palestine is fully liberated from the Israeli occupation forces,” he concluded.

The Israeli occupation has ruined another Christmas for Palestinians, with Santa’s arrival and much-awaited family gatherings intentionally repressed.

With each passing year, the occupation further takes the joy out of Palestine, the land where Christ was born.