The ceremony, attended by the Etsu Patigi, His Royal Highness, Alhaji Ibrahim Umar Bologi, was held recently at the Aliyu Ahman Pategi Hall in the university premises.

The occasion was also witnessed by several dignitaries, including the Proprietor of APU, Hon. Aliyu Ahman Pategi; Executive Director, World Institute for Peace, Mr Lamina Kamiludeen; representatives of the Joint Admissions and Matriculation Board (JAMB) and the Hydroelectric Power Producing Areas Commission (HYPPADEC).

While welcoming dignitaries, the Vice Chancellor of the Institution, Prof. Mahfouz Adedimeji said the number of the matriculating students admitted in the 2020 and 2021 exercise is 269.

The Nigeria’s youngest VC at 47 therefore enjoined the matriculating students not to take the grace of being among the first set for granted as it only takes divine grace to be among pioneers in any society.

“Today’s occasion is mainly for the students and I want to felicitate the lucky set, the matriculating pacesetters of this university. I also congratulate their families, especially their parents and guardians, on the uniqueness of their children and wards.

“It is apposite that their names as pioneer students will be inerasable in the annals of the University as it takes divine grace to be among the pacesetters or pioneers in any society. I, therefore, want to encourage the lucky students, with their parents and our stakeholders at large, not to take the grace for granted.

“Dear students, as today is your day and a definitive chapter in the book of your sojourn not only at Ahman Pategi University but also in life, it is important that you re-commit yourselves to the pursuit of excellence and embrace positivity in doing so. The University is a small city when there are ideas, ideals and ideologies which are often in a state of flux.

“In the years ahead and perhaps even now, this university won’t be a difference. It is your responsibility to separate the wheat from the chaff and remain guided by always ensuring that you do the right thing. For example, you cannot succeed without adhering to the rules and regulations and discharging your primary assignment in the university with utmost commitment,” the VC said.

Muslim News findings revealed that the institution, which began operations on February 3, 2021 after approval by the Federal Executive Council of Nigeria under the chairmanship of President Muhammadu Buhari, started with two faculties, namely Faculty of Humanities, Social and Management Sciences.

“Though Ahman Pategi University began just last year, it has recorded its few rings of success stories. Apart from starting academic work less than two months after receiving its provisional licence to operate, the University emerged the first Nigerian university to host the national beach soccer league, which was broadcast on Super Sports cable channel late June last year. The University also gave a good account of itself at the 9th edition of the All-Nigeria Universities Debating Championship and 2nd edition of All Nigeria Universities Quiz Challenge hosted by the University of Ilorin between February 13 and 19, 2022. APU is the only university established in the past six years to participate in the academic tournament.

“The University has also succeeded in networking with other institutions and organisations both within and outside Nigeria while publications bearing the name of the University have appeared in international outlets. Soon, staff of the university will be engaging schools in the hosting community to add more value to their teaching and learning experiences and deepen the community service component of the university mandate.”

The Vice Chancellor, meanwhile, thanked all stakeholders, management, academic and non-academic staff of the university, noting, “the modest efforts highlighted and those foregrounded could not have been recorded without the divine guidance of Almighty Allah and the support of people of goodwill.” 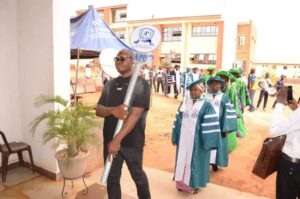 For his part, the proprietor of the institution,  Hon. Aliyu Ahman Pategi made a presentation on the impact of education on individuals and the society.

According to him, “Education is beneficial to individuals and societies. At the level of individuals, education improves their income, enhances their careers, improves their skills and employment opportunities. At the societal level, citizens that live in highly educated societies tend to be healthier, have higher rates of economic stability, lower crime rates, greater equality and more political stability. Therefore, the benefits are both personal and societal.

“Education brings out the best in individuals and societies train and retrains its citizens. Such individuals become instrumental to developing their societies. There is an intricate relationship between education and society. Both are bounded entities. Because our society is a social Institution that teaches us how we relate with each other, it then becomes a major facilitator of our system of education,” he stated.

Hon. Ahman Pategi who is also the Pro-Chancellor and Chairman of the Governing Council of the University recalled how they were exposed to three areas of education growing up in Patigi Town.

“Growing up in Patigi town, we were educated in three areas; the traditional education which prepares one for a vocation in life such as carpentry, goldsmith, farming, motor mechanic and teachings from our mothers, uncles and elders; secondly, the traditional Quranic or Christian education that prepares one for moral and ethical living in the African value ways, and, thirdly; the formal western education. In Africa, it is said that children are brought up by the entire village. 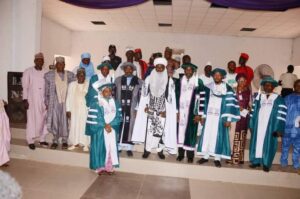 Earlier, before his presentation, the proprietor remembered personalities who started the Ahman Pategi University journey with him, but are no more to witness the present.

“We should give glory to Almighty Allah for making us witness today. Some of those that we started this journey with have passed away. Two are of particular interest. Architect Susan who designed this whole estate and Etsu Ibrahim Chatta.”

In his keynote address, the Etsu Patigi appealed to the matriculating students to study hard and desist from social vices capable of destroying their future.

“You must ensure that Ahman Pategi University meets international standard and the National University Commission standard,” he added.

The first class monarch also commended the proprietor of the university, saying the establishment of the institution in his domain will not only enhance higher learning, but also improve socioeconomic activities.

“I want to specifically appreciate the efforts of the school proprietor, Hon. Aliyu Bahago (Galadima Patigi) for the establishment of Ahman Pategi University in my domain which will enhance in uplifting higher level of education in our community and also improve socioeconomic activities. We assure you and the school management of our unflinching support at all times and pray that the Almighty Allah will continue to guide and protect you in all your undertakings.

“I want to applaud the efforts of our amiable and dynamic Vice Chancellor, Prof Mahfouz A. Adedimeji, fspsp, the board of trustees, the governing council, the management and the entire university community for the educational contribution.”