SPECIAL REPORT: The Hijab in the light of the Qur’an and Hadith

by Muslim News Nigeria
in Hijab
0

The harassment of five female Muslim students by Mrs Ajilore Adeola, the Principal of Aguda Community Senior School in Surulere, Lagos earlier this week brought to the fore the discussion over the age-long Hijab tussle in Lagos.

The assault against the five students, namely Mariam Alabi, Ibrahim Fathia, Ajao Aishat, Shomefun Nafisat and Idris Mutiat happened despite the Lagos State Governor Akinwunmi Ambode’s approval for the Hijab to be worn on school uniforms.

For weeks now, a similar assault on Muslim students wearing the Hijab has been playing out in the International School, Ibadan, the staff secondary school of the University of Ibadan, where the school principal, Mrs Phebean Olowe locked female Muslim students out of the school because they adorned simple shoulder-length Hijabs.

Although the students’ right to use the Hijab is still being denied, relative calm has returned to the 56 year old school following the intervention of the University of Ibadan Muslim Community.

It has been previously discussed via this medium, the constitutional provisions, including the Appeal Court verdict which allowed the use of the Hijab in both public and private establishments in Nigeria.

Few weeks ago, this writer also explained the significance of the Hijab to his non-Muslim audience, who have always kicked against the use of the Hijab, even when the Islamic attire is not imposed on them or their wards.

Worse still, the molestation of innocent children who want to obey their Lord has continued unabated in the hands of fanatic school administrators.

It is therefore important at this point to explain the position of Islam on the Hijab without mincing words, what the Shari’iah says and why Muslim ladies who have reached puberty cannot do without it.

Hijab, linguistically, means screen, cover(ing) or curtain. It is from the Arabic word ‘hajaba‘, which has two meanings: barrier – between two things and prevention – such as preventing an occurrence.

In other words, if a Muslim woman (or female student) puts on the Hijab, it is going to serve as a barrier between her privacy and the prying eyes of the public or better still, it is a barrier to prevent seeing or viewing (something), according to Abd Al-Ra`uf Muhammad Al-Almanaawee.

Technically, Hijab is a spacious cloth Muslim ladies use to cover their nudity and all tempting or erogenous parts of their bodies. According to Islamic law with evidences from the Noble Qur’an and Sunnah, Hijab is restricted to two meanings.

First, it means ‘the staying at home of a woman’, which allows her to cover herself away from the sight of men and mixing with them. The second meaning as explained by Bakr Abdullah Abu Zaid in Hirasatul Fadeelah is the woman’s garment that is made of her free outer gown and the head cover.

There is no disagreement from among the early Muslims and sound Islamic scholars over the obligation of the Hijab, except for some heretic views, which hold, among others, that “only one out of eight separate verses in the Noble Qur’an referred to Hijab as a cloth. And the verse was exclusively for the wives of the Prophet (Peace be upon him), not other women.”

Their skewed misinterpretation was based on Qur’an 33: 53: “…When you ask them (the Prophet’s wives) for anything you want, ask them from behind a screen. That is pure for your hearts and for their hearts.”

This heretic view has been refuted by scholars of Ahlu-Sunnah, including Imam At-Tabari, the greatest scholar of Qur’an Tafseer (explanation), who stated in his Book of Tafseer regarding this verse ...”When you ask them” meaning, the wives of the Prophet and the believing women who are not your wives…“ask them from behind a Hijab”, and do not enter their homes (while they are inside the house alone), this is purer for your hearts and their hearts. So, this verse is a rule, which is not for the Prophet’s wives only but for all Muslim women.

The following verses from the Noble Qur’an are more explicit and specifically commanded not only the wives of the Prophet (peace be upon him) but the women of the believers to wear the Hijab (thus rendering it Fard).

“O Prophet, tell your wives and your daughters and the women of the believers to draw their cloaks (veils) all over their bodies (i.e. screen themselves completely except the eyes or one eye to see the way). That will be better that they should be known (as free respectable women) so as not to be annoyed. And Allah is Ever Oft-forgiving, Most Merciful.” Qur’an 33: 59

Also, in Qur’an 24: 30, Allah (SWT) says: “And tell the believing women to lower their gaze (from looking at forbidden things), and protect their private parts (from illegal sexual acts) and not to show off their adornment EXCEPT THAT WHICH IS APPARENT, and draw their veils all over juyubihina (i.e their bodies, faces, necks, and bossom) and not reveal their adornment except to their husbands, or their fathers or their husband’s fathers, or their sons, or their husband’s sons, or their brother’s sons or their sister’s sons, or their Muslim women (i.e sisters in Islam) or female slaves whom their right hands possess, or old male servants who lack vigour, or small children who have no sense of feminine sex.”

What about the Niqab (face covering)?

“…Except that which is apparent” in the above verse has been interpreted differently by Muslim scholars of the predecessors – including jurists, exegetes of the Qur’an, and scholars of Hadith. The Companions of the Prophet (peace be upon him) also differed on the subject matter.

The first group, among whom are eminent scholars such as Sheikh `Abdul-`Aziz ibn Baz, Abu Al-A`la Mawdudi and Sheikh Saalih Uthaymeen, among others are of the opinion that ‘except that which is apparent’ refers to ‘an eye for seeing’, since using the Niqab (face covering) is Fard (obligatory). This is the view of Ibn Abbaas and Ubaidah As-Salmaaniy. In another narration, Qataadah and Ibn Abbass added that the two eyes can be uncovered.

According to these scholars, a Muslim woman who does not use the Niqab is considered “a sinner” who abandons what is regarded as ‘Fard’, and she will be punished by Allah if she does not repent and start using it before she dies.

Sa`id bn Jubair (may Allah be pleased with him) said, based on his understanding of this verse: “It is not permissible for a Muslim woman to be seen by a man lawful for her to marry unless she puts on a face veil in addition to the Hijab which extends from her head to her chest.” 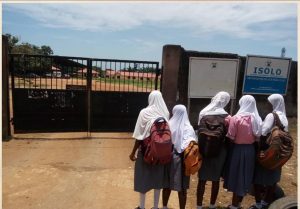 The second group of scholars, including Sheikh Nasir Ad-Din Al-Albani, Sheikh Yusuf Al-Qaradawi and majority of the Al-Azhar scholars in Egypt; the scholars of Az-Zaytunah University in Tunisia, the scholars of Al-Qarawiyeen University in Morocco, and many Pakistani, Indian, and Turkish scholars as well as others said it is not compulsory (Fard), but
highly commendable if a woman wears the Niqab. They said, in doing so, she has indeed completed her Deen.

In his famous book, Jilbab-ul-Mar’at Il-Muslimah, Sheikh Nasir Ad-Din Al-Albani wrote that the ‘except that which is apparent’ refers to the face and the hands. Quoting an authentic hadith, as narrated from Aishah that Asma bint AbiBakr entered upon the Messenger of Allah (peace be upon him) wearing a thin garment. The Messenger of Allah (peace be upon him) turned away from her and said: “Oh Asma, when a woman reaches the age of menstruation, it is not proper for anything to be seen of her except this and this,” and he pointed to his face and hands.”

Based on this hadith, Shiekh Al-Albani concluded that; “Therefore, we can see that the correct view is that the Niqab is recommended, and not obligatory. Wearing the Niqab is better. Whoever adheres to the obligation, it is good enough; and whoever does the recommendation, it is better.”

Read more in Hijab and the Nigerian Press by Rasheed Abubakar

One of the arguments of the critics of Hijab is that it specifically relates to Muslim women in the public and not female students in public primary and secondary schools. This was the view of Mr Lawal Pedro (SAN), the former Solicitor-General of Lagos State, during the Lagos Hijab ban court case, which was later ruled in favour of the Muslim students at the Court of Appeal.

On the contrary, Hijab is compulsory for Muslim ladies who have reached maturity or better still, who have started menstruating, which starts at age 10 upwards. Evidently, going by the ruling, many primary and secondary school students are within this age category.

Besides, it is pertinent for young Muslims ladies in this age of complete moral degradation and almost total collapse of morality to wear the Hijab without discrimination. Islam has charged parents to teach their children the fundamentals of their Deen (religion) in their formative years.

Whenever a girl is given birth to in this world, let her be dressed with the Hijab. When she is to follow her parents out, let it be her culture. These are some of the reasons Muslim students should be allowed to wear the Hijab in schools, both public and private schools, in accordance with their faith and Nigerian constitutional provisions.