The girls in the picture above are Hijab-wearing female students of the International School, Ibadan, the staff secondary school of the University of Ibadan.

On Monday, these girls and over hundred others launched a popular bid to help break the anti-Hijab deadlock in their school, by wearing Hijabs to school.

While newspapers have fed you with a lot of THEIR versions of what happened between Monday and today (Thursday), here are juicy details they hid from you!

Today, Thursday, November 15, the School Management of ISI, led by a Christian Principal, Mrs Phebean Olowe, decided to lock these Hijabi girls out of the school. That is why the picture you are looking at was taken at the school gate.

In essence, Mrs Olowe and he cohorts believe that the girl-child can be denied access to education if she chooses to wear a harmless, small, and by the way, cute, smart and beautiful Hijab. 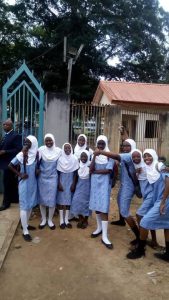 The fact that the Nigerian laws and several recent legal precedents have confirmed the legality of wearing the Hijab on school and institutional uniforms is of no consequence to Mrs Olowe et al.

However, Mrs Olowe and he co-travellers did worse yesterday, Wednesday, and the newspapers will never tell you this.

They allowed all the students to enter the school premises, including over 100 Hijab-wearing Muslim ISI girls. After the parents had departed, and with the school gates firmly locked, Mrs Olowe deployed several teachers on what amounted to individual and collective campaigns of hate, coercion, intimidation and forceful, negative pressure against the Hijab-wearing girls.

The agents of hate succeeded in scaring and pressuring all of the girls to remove their Hijabs, except 8 of them who stood their ground and refused to, like they rightly should have done, and like Firdausa Amasa did.

Mrs Olowe et al immediately ordered school security staff to round up the 8 girls and lock them up in the school library.

Essentially, the girls were jailed and detained in the ISI school library because they refused to debase themselves by removing their Hijabs. Immediately after the jailing, the agents of hate proceeded to the classes of the jailed girls to conduct two impromptu tests each, all in a bid to put additional pressure on the girls by putting them at academic disadvantage.

Today, despite all the jailing, academic pressure and psychological theatrics, the girls still appeared in their Hijabs, and had even been joined by 1 more girl – making 9, as you can see in the picture.

Dear “Madam Thatcher” Phebean Olowe couldn’t take it no more, and she promptly locked them all out of the school, and kuku jailed them in the open air.

This is just the beginning of this “season film” though. The parents of these Hijabi beauties have resolved not to take this assault on their girls lying low, and there is already chatter of an impending legal battle.

I’ll stay sharp to ensure I feed you with news the newspapers will always hide from you on this interesting matter.