Muslims across the globe have called on the Saudi Arabia-led Arab League to go beyond condemnation but take action against the United States’ recognition of Israeli sovereignty over the Golan Heights.

These spontaneous reactions came immediately after Riyadh, together with the Arab League, joined the United Nations to condemn the move led by US President Donald Trump, while insisting that it is “a violation of the UN Charter and international resolutions.”

Many netizens – particularly Muslims who took to their social media handles as closely monitored by Muslim News, called on Saudi Arabia to take the necessary action against Israel and the US for what they termed “flagrant disregard of international law.”

Maadi Raasil from Singapore said: “Tired of listening to all talks…where is the action???

Another commenter, Muhammad Yousry, a Malaysian, replied thus: “You’re tired. Some of us are sick.”

Resida Jaafar from Indonesia also had this to say: “Oh pleaseeee… Heard this kind of statement over and over again!”

Jaafar was reacting to series of condemnation of such incidents issued by the Arab League without action. 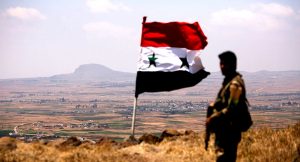 It would be recalled that Riyadh at first strongly condemned US President Donald Trump’s recognition of Jerusalem as the capital of Israel in December 2017.

The Saudi Royal Court issued a statement then, just like now, saying that the Kingdom followed “with deep sorrow” Trump’s decision and warned of “dangerous consequences of moving the US Embassy to Jerusalem.”

Truly, the Kingdom warned against “dangerous consequences”, but took no action to that effect. Rather, Saudi Arabia Crown Prince Muhammad Salman, famously known as MBS, moved on to strengthen his country’s relations with Washington.

LapuLapu Basilan from Isabela, Philippines noted that if strict actions are not taken in time, what might be left of the Arab nations would be just history.

In his words, “Very corny. Denounce or you are celebrating what Donald Trump is doing to the Arab world. Keep on condemning, denouncing, what ever you call it, until one day what is left of the Arabs is only history for the next generation. All your land will be taken by Israel.”

Another reaction from Alexander Mamalender noted that it’s about time the global Muslim community united and mobilized action in defense of the sovereignty of the Palestinians.

He said; “We don’t have to blame each other. This is the time to unite all Muslims around the world to face the evil Israeli and US government. We are Muslims and must show the world that if Muslims unite, no one can stop us. Do something, Islamic nations. Words are not enough.”

Q: Will the Arab League, led by Saudi Arabia, take decisive action against Israel and US, beyond mere condemnation?