In the case of Alhaji Aremu Gawat or any individual declared missing for 1, 2, 7 or 10 years, can they be declared dead and a burial conducted for them in absentia, since it’s not certain if they are alive or dead?

According to the Nigerian scholar based in the Middle East, his wife must not remarry, his property must not be inherited, and his rights must not be trampled upon until his condition becomes known, whether he is alive or dead.

“All the above-mentioned can take effect only after a Shariah court passes the verdict of his death,” Ibn Taofeeq said.

Speaking further, he said without the Shariah court’s verdict on his death, the fundamental is that he is alive until proven otherwise. 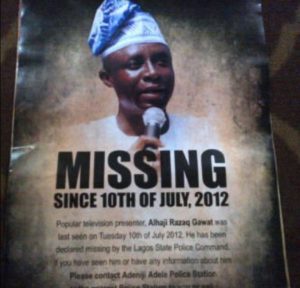 Ali radiya Allahu anhu said about a woman whose husband got lost: “She is a woman who calamity fell on, she should be patient, she shouldn’t be remarry until there is a certainty of his death.”

What is the duration to decide the death of the missing person?

The jurists differed on this;

The Hanafiyyah say they will consider his age mates’ deaths in his town. If none of his mates can be found alive in his town, then his death should be considered, and it was narrated from Abu Haneefah that the duration is 90 years.

The Maalikiyah are of the opinion of 70 years, according to the famous Hadeeth in which the Prophet said: “The ages of my Ummah is between sixties and seventies.”

The Shaafi’iyah: They consider the duration to be 90 years also, and this is the duration of his age mates in his town. Also, some of the Shaafi’iyah are of the opinion that there is no specific duration except the verdict of the Islamic judge on his death.

The Hanbaliyah: Imam Ahmad ibn Hanbal explained that if he got lost during the period that his death is possible, like he went out while they later got information that some set of people got drowned in water, and some got rescued from the accident, the duration will be 4 years. After 4 years, his wife should do Iddah and his wealth should be distributed Islamically.

Ustadh Ibn Taofeeq however said, “if he got missing during the time his death is not possible, like if he went out for trading or swimming or to acquire knowledge, there are two opinions regarding this:

A: He should be awaited till he attains the age of 90, because what is common is that he cannot live beyond this age.
B: His matter should be placed in front of a Muslim judge, and the Ijtihād of the judge should be considered.

“The 90 or 70 years means the age he got missing will be subtracted from 90, then his family will wait for the remaining years unless a Muslim judge passes the ruling of his death, and we go by the judge’s Ijtihād ruling. For example, if he got missing at 40, we subtract 90 from 40, which equals 50. That means we are to wait for 50 years,” according to the Ustadh.

That is equal to 4 years, 4 months and 10 days. After that, she is free to remarry. If eventually after the 4 years, her husband returns and she has gotten married to another person then, she should choose between the first and second husbands,” Ustadh Ibn Taofeeq added.