Reality check, Morsi is dead. Professor Mohammed Morsi, the first and only democratically elected President of Egypt slumped in court today, and died a few minutes after in hospital.

The global reactions to his death have ranged from the virulently angry, to tepid, hypocritical condolences, to absolute, conspiratorial silence.

Naturally, Washington is mute. President Trump could not care less about ‘one less terrorist’. In fact, not one single American official, even the lowly, nameless aides, have said a word about Morsi’s death. The same goes for the European ‘defenders of democracy’, including the UK, France and Germany.

They are lost for words, as they remember vividly the double-faced, hypocritical roles they played in the El-Sisi coup, and eventual massacre of thousands of Morsi supporters and jailing of tens of thousands more. Sometimes, silent concurrence with tyranny is as loud and guilty as the shootings, killings and jailings. 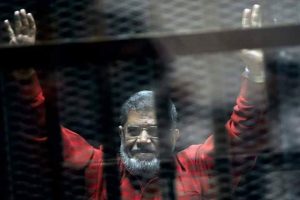 The Arab monarchs, especially of Saudi Arabia, UAE, and Bahrain are probably clinking glasses and backslapping each other in congratulations right now. The Morsi mandate has now died with him, and their ‘Man in Cairo’, Butcher-in-Chief El-Sisi, can now enjoy another Mubarak-long tenure as absolute ruler of Egypt.

There is an important dimension however to this quite painful loss of yet another icon of democracy in Africa; the way and manner the West helps to facilitate the murder of the would-be-emancipators of Africa and the Third World, usually in connivance with carefully selected despots who would do their absolute bidding, at the cost of suppressing their own peoples.

No better examples suffice in this rather painful moment of mourning than those of Chief MKO Abiola, the winner of the June 12, 1993 Nigerian presidential elections and President Mohammed Morsi of Egypt, who died 5 days after Nigeria declared MKO Abiola’s June 12 an annual Democracy Day holiday, and exactly 7 years after President Morsi himself was sworn in as President of Egypt.

Ardent watchers of Nigerian political timelines will remember that Chief MKO Abiola slumped while drinking tea with visiting American diplomats Thomas Pickering, Susan Rice and Bill Twadell, in rather suspicious and unexplained circumstances. Though official autopsy reports indicate he died due to massive cardiac hypertrophy, the real cause of his death will probably remain shrouded in secrecy and controversy, while popular conjectures include sharing a secretly segmented jug of tea with the American diplomats, and being poisoned from the same tea with Digitalis, a drug that, in the right doses, can easily tip a previous heart disease patient into instant but untraceable death.

All we know till date is that Pickering and friends came to Nigeria, were confirmed to have met with Chief Abiola in detention, and probably ‘supervised’ or ‘ensured’ his death, thereby helping to ‘reset’ Nigeria’s democracy away from the possibility of an Abiola presidency, which was sure to tow a path clearly independent and antagonistic of the Western powers, and would definitely demand reparation for the African Slave Trade, akin to what Germany currently pays to Israel for the Holocaust.

11 years after, it was time to exterminate President Morsi of Egypt, and with him, his mandate, which would have remained a stubborn, undying possibility till he died. The stage had been set for 7 years, and nobody saw it coming, in the midst of several geopolitical conflicts at this time. Morsi was already being killed and smothered to death gradually for years, by denying him access to drugs, doctors and family, thereby ensuring that his diabetes, high blood pressure, and kidney disease kept worsening day by day.

According to Human Rights Watch, he had fainted repeatedly due to his ill-health, and the criminal medical neglect the coup government of Egypt maintained over him. Today, and at practically every court session he and his fellow political prisoners attended, they were always kept in glass cages in court. Your guess is right; so they could only be seen, but never heard, especially in situations of emergencies. Only a terse statement from ‘Egyptian state TV’ informed us about his death, with Aljazeera and Middle East Eye reporting that President Morsi spoke for 20 minutes (unheard, in the glass cage), became agitated, fainted, collapsed, was rushed to hospital, and died there.

No matter how ill he was, a man who spoke for 20 minutes is not supposed to ‘become agitated’ by his speech to the point of collapse and eventual death, especially when such a man is an experienced university teacher and politician, whose everyday activity is speaking, and for long periods too.

The world will never know the truth about who and what killed President Morsi, unless the US and its allies decide to ‘declassify’ the facts decades after they have profited from their nefarious actions, like they did in the cases of the Mossadegh coup in Iran, the Gulf of Tonkin incident which they utilized to trigger the Vietnam War and Colin Powell’s fake white ‘anthrax’ powder, which they used to justify the 2003 Iraq War. President Morsi’s death may as well have been a perfectly orchestrated assassination, where he was secretly injected or drugged before the trial session, brought into the open court for the world to see, and made to slump and faint there, so the world can see he ‘died of natural, innocent causes’ and was not shot, strangled or bombed to pieces, like El-Sisi usually prefers.

In summary, at best, President Morsi was killed via slow, criminal medical negligence, while there is a remote possibility that this is a high stakes, sophisticated assassination op, complete with all the poisons and intrigues the CIA usually bequeaths to its loyal despot leaders in the Middle East.

Like MKO, Morsi has been snatched from us by the self-professed democratic enablers of tyranny, and like MKO, there shall be mostly social media posts and loud cacophonies of condolences, thoughts and wishes. Like Nigeria and Africa, the peoples of the Arab world are starting to tolerate the fangs of tyranny the West has helped to sink into their pained souls for decades now, and Morsi’s death is yet another example of a sacrificial lamb on the slaughter slab of Western-supported Arab despotism.

However, contrary to the wishes of the enablers of tyranny, the sun will shine again, there shall be justice for the martyrs of true popular democracy and the quest for freedom, and like their victims, all of those despots, and their enablers and sponsors, will kiss the dust in inevitable death, while their stories will be preserved in history in the appropriate books; of ignominy, tyranny and double-faced hypocrisy.