On Tuesday, June 18, 2019, several top newspapers in the United Kingdom (UK) hit the newsstands, but from their front page headlines, there were no reports about the death of Mohamed Morsi, the first democratically elected president of Egypt, who died yesterday in Cairo after appearing at a court session.

The total media blackout over Morsi’s death was also observed in the Daily Mail, Daily Mirror, Daily Express, Metro and i newspaper with many of them putting their searchlights on who becomes the next British Prime Minister and other regional politics, as seen in the summaries below. 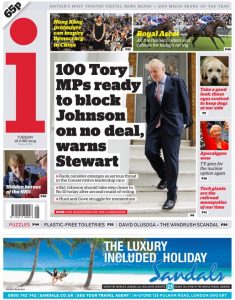 One candidate for the leadership of the Conservative Party makes headlines on three front pages. According to the i, Rory Stewart – once a “rank outsider” to be the UK’s next prime minister – has warned frontrunner Boris Johnson that 100 Tory MPs would be willing to vote against any government trying to leave the EU without a formal withdrawal deal. 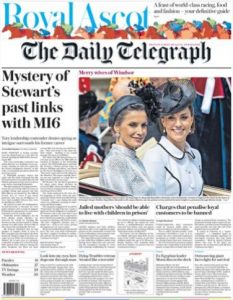 Mr Stewart is facing questions over his past, amid suggestions he was recruited as a spy by the UK’s overseas intelligence agency, MI6, before going into politics, reports the Daily Telegraph. The international development secretary has emerged as second-favourite for the top job, behind Mr Johnson, the paper adds. 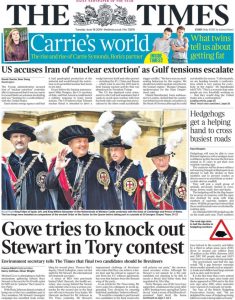 However, the Times says Environment Secretary Michael Gove is trying to halt Mr Stewart’s momentum. Mr Gove writes in the paper that colleagues should ensure the final two candidates in the vote “believe in Brexit” to avoid polarising the party. Mr Stewart is the only candidate not saying he can secure a better Brexit deal than that negotiated by Mrs May, the paper points out. 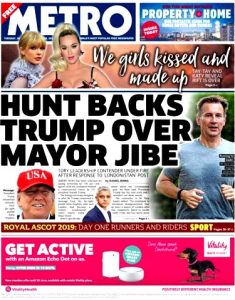 Another leadership contender, Jeremy Hunt, makes the Metro’s front page after he backed an attack on Mayor of London Sadiq Khan by US President Donald Trump. Mr Hunt, the foreign secretary, said he “150% agreed” with the sentiment of a message Mr Trump retweeted calling the capital “Londonistan”, although he said he “wouldn’t use those words”. 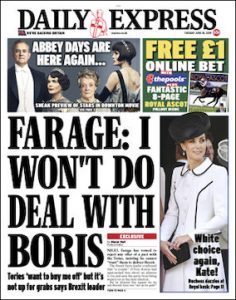 Meanwhile, the Daily Express says Nigel Farage has vowed to reject any pact at an election between his Brexit Party and the Conservatives. The paper reports his claims that Tory donors had approached him about an alliance to prevent their party being “wiped out” at the next general election.

The Daily Mirror leads on an exclusive interview with Alexanda Kotey, one of the “Beatles” – the British men who made headlines by fighting for the Islamic State group – from a jail cell in Syria. The paper says he wants to live in the UK with his secret wife and three children. 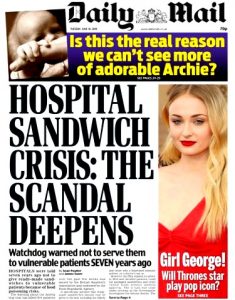 The listeria outbreak affecting hospitals leads the Daily Mail. The paper says hospitals were warned seven years ago about the risks of food poisoning when giving ready-made sandwiches to vulnerable patients. However, the Food Standards Agency relaxed its rules in 2016, the Mail reports. The agency is quoted insisting its guidance is “robust”. 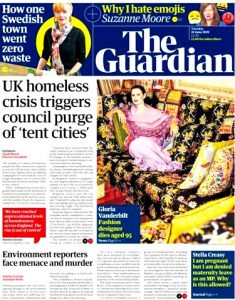 Homelessness leads the Guardian, which says the number of “tent cities” forcibly removed by councils across the UK has trebled to 254 over five years. Campaigners have criticised local authorities for a heavy-handed approach, the paper adds. 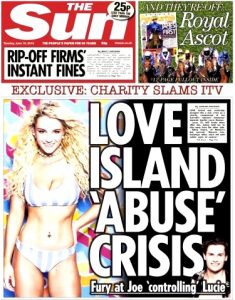 Charity Women’s Aid has complained about the behaviour of Love Island contestant Joe Garrett, suggesting it shows “subtle signs of control” that are common in abusive relationships, according to the Sun. It quotes an ITV spokeswoman saying: “We take the emotional wellbeing of all the Islanders extremely seriously.” 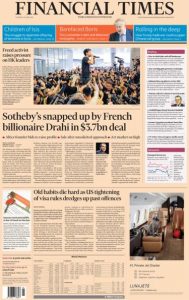 The Financial Times leads on news that “the hammer has fallen” on Sotheby’s auction house, which has been sold for £3.7bn to Franco-Israeli billionaire Patrick Drahi, who founded telecoms group Altice. 

By: Rasheed Abubakar| Twitter @rawshieldpr with additional information from bbc.com