No fewer than 151 Muslim homes and 400 Internally Displaced Persons (IDPs) had smiles put on their faces during the Eid ul Adha festival as the Nigeria Office of the International Muslim Women Union (IMWU) distributed Qurbani (Eid meat) to the less privileged.

The distribution exercise, first of its kind, was held simultaneously in Abuja, Osun and Lagos states on Monday, August 12, 2019.

No fewer than 400 persons were beneficiaries at the IDP camp, Sabo Kuchingoro FCT, Abuja. At the same time, 60 families in Osun and 90 in Lagos States also benefitted from the distribution.

The International Muslim Women Union is a global group of Muslim women organisations with its headquarters in Khartoum, Sudan and branches in different countries of the world, which majorly represent Muslim women across the globe in affairs that particularly concern them.

In an exclusive interview with Nigeria’s most authoritative Islamic newspaper, Muslim News, the Head of the Nigeria Office of IMWU, Dr. Khadijah Olaniyan-Shobowale noted that the distribution was aimed at putting smiles on the faces of Muslims in the festive season.

Dr Olaniyan noted that, “As Muslims, we have the opportunity to give Sadaqah (voluntary charity). Alhamdulilah, we met with our sister organisations in Malaysia, where they offered to provide facilities to help ameliorate the challenges of Muslims during the Eid ul Adha festival. That is what happened.

“AlhamduliLlah, we slaughtered six cows in 3 different locations in Nigeria, namely the IDP camp in Abuja, in the State of Osun and at the Dawah Centre in Lagos State”, she said.

While interacting with some of the beneficiaries, Muslim News gathered that they were happy and relieved, especially during the festive period.

One of the beneficiaries, Imam Abdul Waheed Ibrahim said, “I’m very happy because their intention is that those of us that didn’t have the opportunity to slaughter for Eid ul Adha should have something to eat. This act has done nothing to us than make us happy. I pray Allah be with them. It is from the little Allah gave them that they have given us.”

Hajiah Akinsanya Sherifah was short of words as she simply said, “I say JazakumuLlahu Khayran. May Allah bless them more. We are really grateful for this”.

Other activities of the Nigeria Office of IMWU include provision of relief materials during Ramadan, counselling sessions for university students, rendering assistance to female students to secure admission into Sudanese universities on scholarship and many others. 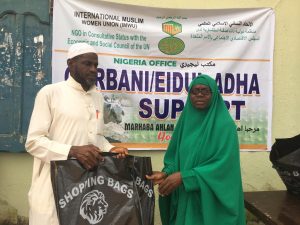 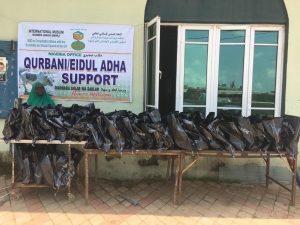 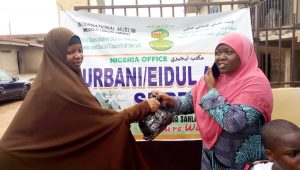 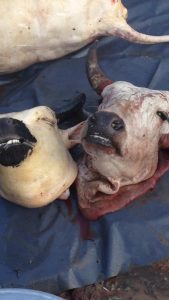