– Over 10, 000 worshippers will have no place to observe Jumah tomorrow

The Rivers State Governor, Nyesom Wike, who recently boasted that the “state is a Christian state and cannot be touched by anyone” has drawn the ire of over 10, 000 Muslim worshippers following the demolition of a huge mosque project in Trans-Amadi, Port Harcourt.

Angry worshippers exclusively told NewsmakersNG on Tuesday that the mosque was illegally demolished by officials of the Rivers State Ministry of Urban Development and Physical Planning who came along with armed mobile policemen, citing non-compliance despite the existence of Rivers State approved building plan.

NewsmakersNG reported that the mosque building, which began 10 years ago, was first demolished under the administration of Wike’s predecessor, Mr Rotimi Amaechi, leading to a lawsuit in which the worshippers got a favorable judgment six years ago.

Armed with the court judgement, the worshippers returned to the site and have committed over N30million to the project again before Wike’s men demolished the mosque where more than 10, 000 people gather every Friday for Jumat.

Reacting to the development, the leaders of the Muslim community condemned the demolition, calling on President Muhammadu Buhari and members of the National Assembly to intervene and call the governor to order.

The Imam of the mosque, Alhaji Haroon Muhammed, said officials of the Rivers State Ministry of Urban Development and Physical Planning were accompanied by armed mobile policemen to carry out the illegal demolition on August 20.

“In the whole of Port Harcourt, this is the most populated mosque. Muslims all over the world can see what has happened to a mosque that is duly approved by the state government in Rivers State. The government of Rivers State had harassed us three times now – once on the 29th of last month, then on Thursday 16th of August and 20th without any formal notice or anything.

“Members of all the armed forces, the agencies, the police, army, oil company workers, and government workers that are Muslims have only this place to worship,” he said. 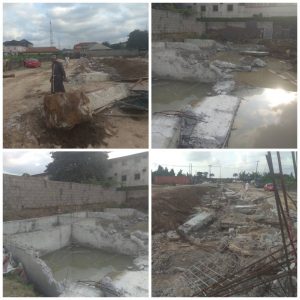