Kannywood actor and singer Adam Zango has paid a private secondary school in Zaria, Kaduna State about N47 million to sponsor 101 orphans and less-privileged children in the school.

The management of the school confirmed that Mr Zango paid N46,714,520 for the students who are in senior secondary 1 to SSS 3 to cover their tuition and other costs.

In a letter of appreciation, seen by PREMIUM TIMES, the management of Prof. Ango Abdullahi International School, Zaria, thanked Zango for the gesture on behalf of the parents of the children. 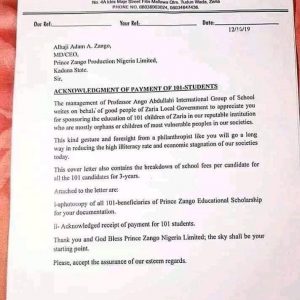 “The Management of Professor Ango Abdullahi group of schools writes on behalf of the good people of Zaria Local Government to appreciate you for sponsoring the education of 101 children of Zaria in our reputable institution who are mostly orphans and children of the most vulnerable in our society.”

Zango posted the receipt issued by the school for the payment on his Instagram and thanked his friends and well-wishers for their prayers for him over the gesture.

“I think it’s excellent to have the opportunity to help others and to support those who are worse off. Helping others, especially kids fulfils my heart and it’s something I enjoy doing. 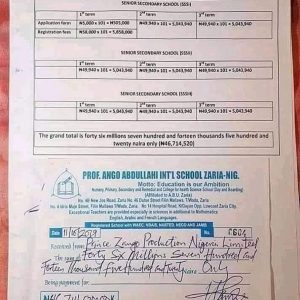 “As from now on, together with my team, we won’t hide our good deeds any longer. We’ll work to improve the lives of women & less-privileged children, adolescents and families across Nigeria.”

More than three thousand fans and colleagues dropped a comment on the actors Instagram page applauding him for the gesture.

Popular actress, Maryam Booth, in her post prayed that God rewards the actor abundantly.
“May Allah reward you and bless you with Aljannat in the hereafter.”

Speaking to BBC Hausa, Shamsuddeen Maiyasin, Garkuwar Makarantar Zazzau, who is the proprietor of the school, said Zango paid over N46 million for selected 101 less-privileged children in the school. 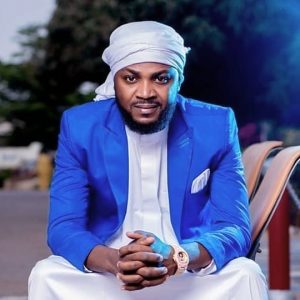 “It is my school and It is a group of schools. It is true that he paid that amount for some students who could not pay for their education. And this is not the first time. He has been doing that for a very long time. In fact, not only in Nigeria he sponsored some orphans to study in Sudan, and I was the one who facilitates their going at that time.

“He never wanted us to speak out and tell the world what he has been doing in helping children of the less-privilege to get educated, but we told him that we will tell the world so others can learn from him.

“He paid for 101 children who are orphans and less-privileged who just got admitted into SSS 1 for their education through to SSS 3,” Mr Maiyasin told BBC Hausa.

Nigerians from all walks of life have commended the actor and called on others to emulate him. Prominent among them is Bellol Lawal, Durimin Zazzau, who also prayed for them.