Worshippers gathered in countries around the world last weekend to celebrate the Mawlid Nabiyy, which marks the birth of Prophet Muhammad (peace be upon him) around 570 AD. Celebrations were observed this year in countries such as Turkey, Nigeria, United Kingdom and a host of others. The festival is also observed by many Muslims across regions, including the Middle East. Muslim News brings you shots of festivities from across the world…

It was a celebration galore in Nigeria as the Muhammadu Buhari led Federal Government declared the yearly public holiday to mark the birth of Prophet Muhammad (peace be upon him). State Governors, Ministers and lawmakers, in their press releases, felicitated with the Nigerian Muslims as they urged them to emulate the exemplary life of Prophet Muhammad (SAW).

Many Muslim Organisations, especially from among the Sufi tariqah sect and mosques across the country held different educating and informative programmes which according to them “was to reflect the teachings of Prophet Mohammed and to pray for peace in Nigeria”. From Abuja, the Federal Capital to Kano and Lagos, the two most populated cities in Nigeria, millions of Muslims thronged different venues to commemorate the Mawlid Nabiyy celebration.

Some also used the opportunity of the public holiday to sensitise Nigerians on several burning issues. One of such is Nigeria’s leading civic right group, Muslim Awareness International (MAI), which held its annual Aqsa Day Programme to educate and sensitise Nigerians on the plight of Palestinians. The group had on several occasions said that there is no significant relationship between Aqsa Day and Mawlid Nabiyy.

Muslim News findings revealed that some sections of the Nigerian Muslims especially from the salafiyyah and other Ahlu Sunnah wal Jamah who kicked against the celebration of Mawlid Nabiyy also observed the national holiday as many of them stayed at home with their family members.

Despite varying views of Mawlid Nabiyy, there are every indications that several Muslim countries, including Indonesia which has the largest Muslim population in the world, with approximately 225 million Muslims, marked the birth of the best of mankind.

Millions of believers filled mosques across Turkey on Friday night as they marked Prophet Muhammad’s birthday, an occasion Muslims around the world observe as Mawlid an-Nabi. On this sacred night, believers say their prayers and read the Noble Qur’an in their homes and mosques. Various religious programs were organised at mosques throughout Turkey.

Marking the start of Mawlid celebrations, President Recep Tayyip Erdoğan stressed that the bonds of the ummah (community) of Muslims worldwide are too strong to break. “What makes us worry about the problems of people who are thousands or tens of thousands of kilometers away from our country is Islam as a common denominator, and the consciousness of being an ummah,” Erdoğan said at a ceremony in Istanbul –  Source: AhlulBayt News Agency (ABNA)

Egypt on Saturday marked the birthday of Islam’s Prophet Muhammad, with people lining up to buy mouthwatering nut-filled sweets. The occasion, known as al-Mawlid al-Nabawi, is observed on 12 Rabi’ al-Awwal, the third month in the Islamic calendar that employs the Hijri era, when Muhammad (peace be upon him) and his followers migrated from Mecca to Madina in 622 CE.  – Source: efe.com

Organised under the platform of ‘Al Burda’ Festival to celebrate Islamic art and culture by the Ministry of Culture and Knowledge Development and held under the patronage of Sheikh Abdullah, the event featured poetry recitals by troupes from a number of Arab and Islamic countries, including the Emirati Al Malid, in commemoration of the Prophet’s birthday, Wam reported on Monday. – Source: Khaleej Times

Uqba Ibn Nafi Mosque is illuminated during an event to mark the Mawlid al-Nabi in Kairouan, Tunisia on November 09, 2019. ( Yassine Gaidi – Anadolu Agency ) 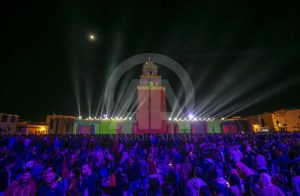 Millions of Yemenis on Saturday have gathered in the 70th Square in the Capital Sana’a and in several other provinces to celebrate and commemorate the anniversary of the birthday of the Prophet Mohammed (Peace be Upon Him). The participants in the mass rally carried banners and leaflets, which express their immortalized love and respect for the Holy Prophet Mohammed (PBUH).

They confirmed their adherence to the prophet’s approach, teachings and examples set during his life. – Source: uprising.today

On 8 November, the traditional republican evening Mawlid al-Nabi al-Sharif was held in Bolgar to celebrate the birthday of the Prophet Muhammad. Ulemas, muhtasibs, imams, academics of Islamic educational institutions, shakirds, public and state figures of the republic, Muslim religious figures from the regions of Russia gathered at the Bolgar Islamic Academy. – Source: Realnoevremya.com

Muslims from across Nottingham, the UK, took part in a parade through the city to mark the birth of Prophet Muhammad (peace be upon him). Hundreds of people joined the start of the procession from the Jameah Fatimiah Mosque in Berridge Road on Sunday, November 3.

Participants read scriptures from the Quran and passed gifts and chocolates to passers-by as they marked Mawlid Nabiyy. Among those observing the birthday was Harris Hanif, a volunteer at the mosque in Berridge Road. He said events like the parade were “vital”, adding: “We want to get the real message of Islam out and the message of peace and make people aware we are just like any normal human beings. We hope we can inspire our own community and others as well.” – Source: AhlulBayt News Agency (ABNA) 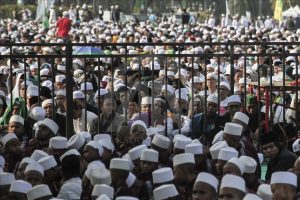 NOVEMBER 9: Thousands of Muslims attend the celebration of the Birthday of the Prophet Muhammad in the area of the National Monument, Jakarta, Indonesia on Saturday 9 November 2019. ( Eko Siswono Toyudho – Anadolu Agency)

Before the glorious birth of Muhammad (SAW), the son of Abdullah in Makkah on Monday, 12th Rabiul Awwal, the third month of the Islamic calendar in the Year of the Elephant, corresponding to August, 570/1 C.E, the Arabian Peninsula (and by extension, the whole world) was in Jahiliyyah (the state of ignorance of Divine Guidance). Read more HERE