The Senator representing Kastina Central, Senator Kabir Abdullahi Barkiya has applauded the Guild of Muslim Professionals (GMP) and the Muslim Public Affairs Centre (MPAC) for the successful hosting of the 2019 Convention with the theme, “The World by 2050: How Ready Are We?”

Senator Barkiya, who spoke with Muslim News at the sidelines of the Award and Dinner night, one of the activities of the convention which celebrated Muslim achievers in business and academia, said there is need for more of such wonderful gatherings for Muslim Professionals in Nigeria.

At the award night held at the Sheraton hotel in Lagos, the Senator, who was also honoured by the faith-based organisations, noted that the Convention could go a long way in providing working solutions to the problems facing Muslims in particular and the country in general.

The prestigous Awards Night also saw the recognition of prominent Muslim personalities from different walks of life with Awards of Excellence and Professionalism in a bid to encourage them to do more for Islam and Muslims in their various capacities.

Speaking with Muslim News, the Vice Chairman, House Committee on Federal Road Maintenance Agency (FERMA) said, “I want to congratulate the Guild of Muslim Professionals for putting up a wonderful Convention. We need more of this kind of gathering among the Muslim community. If you have this group of professionals coming together, they would help to solve a lot of problems facing the Muslims, and in solving that, it will help solve the problems facing the country as a whole.

“This year’s Convention has been able to achieve all the aforementioned goals. We have some youths who are here to have a proper direction of where they are going. We also have some elders at the middle of their career, and we have those at the top. When you have this three groups of people, they can as well come together and see how they can move the community, especially the Muslim community foward,” he added.

Senator Abdullahi, a devout Muslim, however advised the Guild of Muslim Professionals to improve the level of publicity given to the Convention, noting that so many Muslim professionals are left out because they are not aware of the event. 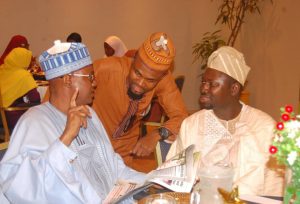 According to him, “The area I think the organisers can improve upon is the area of publicity. The publicity aspect is still very low compared to what we met here. Whoever attended this function will be amazed that such a programme is happening among the Muslim Professionals and it’s not gaining enough publicity as expected. Out there people don’t actually know what is happening here. So, I want to recommend that this kind of programme be given a lot of publicity.

Speaking further, he also advocated the inclusion of government in future editions of the programme, saying that enviable policies could be formulated in such gatherings attended by intellectuals of diverse backgrounds during the course of interactions and discussions. 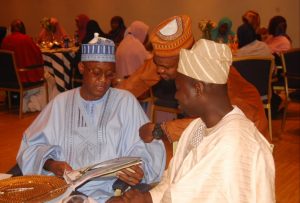 “Aside that, there should also be more of government presence in this kind of programme. The organisers should partner with some government agencies so that they can have a robust discussion. Whatever that is agreed upon here could be developed as a policy whereby government would implement.

“We have the intellectuals around here. They can also come together, look at government policies, review it and set agenda for it. With this, I think the sky is just the starting point for GMP and its partner, MPAC. I want to commend the organisers and wish them success in their future endeavours,” he said.

Commenting on the awardees, Senator Barkiya rejoiced with the awardees of the night saying that their various citations showed that they merit the awards bestowed upon them. He however urged them not to relent in their efforts at representing Islam well.

He urged the Organisers to further spread its tentacles and look beyond the organized private sector, saying that there are Muslims in other sectors like the entertainment, sports who are equally representing the interests of Islam and doing things that can benefit the Muslim community.

“What we need to do is to dig deep. We have a lot of Muslims out there, those who are not bearing their Muslim names in so many dimensions; in sports, entertainment. We should not always look at the organized private sector; we should also focus on other sectors so that people won’t feel they are left out of Islam.

“Anybody that is doing something that he feels Muslims can benefit from should be brought here. Such a person should have achieved so much in his or her profession. Let’s see how we can extend it. Together we can achieve greater things. I want them to work more on those awardees. For those awarded this year, I say kudos to the organisers, they’ve done perfectly well”, he noted.

He had an engaging session with the Publisher of Muslim News, Rasheed Abubakar, who presented the print edition of the Islamic newspaper to the Senator and got his endorsement of the medium to the public.

Although, getting to know about the existence of a newspaper dedicated for the propagation of Muslim achievers and Islam in Nigeria, the lawmaker was impressed as he encouraged the management of the newspaper to extend their circulation widely, particularly many parts of the North, including Abuja because there are many Muslims out there who want to read News exclusively about Muslims.