My second encounter with Senator Barkiya, a lawmaker that goes to the Assembly with his faith – By Rasheed Abubakar

In the past years, there has been little or nothing to show for the representation of Islam at either the lower or upper chamber of the National Assembly. Despite the large number of Muslims at the legislative house, only a few are seen consistently working to change the narratives on misconceptions about Islam.

Interestingly, he is from the state that produced Nigeria’s president, Muhammadu Buhari and luckily for him, they both belong to the same ruling All Progressives Congress (APC). Little wonder he described his relationship with Nigeria’s No 1 citizen as “Excellent”. 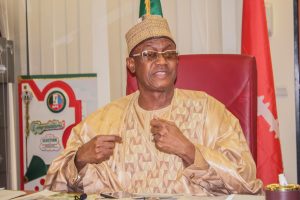 Senator Barkiya is a rare gem, blessed with exemplary character, sound knowledge of Islam and above all, humility, which is similar to the description of ‘Ibadur Rahman’, as firmly established in Qur’an 25:63, where Allah says;

“The servants of the Most Merciful are those who walk upon the earth in humility, and when the ignorant address them, they say words of peace.”

Despite not telling him about our impromptu visit to Abuja for the Week, the Senator welcomed us to his office at the National Assembly. This is without any prior notice or booking of appointment. He said, on phone, “Abdur Rasheed, are you in Abuja?”, I replied in the affirmative. He then said, “come to my office today by 3:00 pm.” 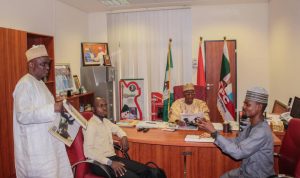 Senator Barkiya had earlier suggested that I establish a strong base for the newspaper in Abuja when we first met in Lagos at the GMP/MPAC Convention held in December 2019, a program for Muslim professionals in all fields of endeavour.

The lawmaker, who was a special guest at the event, believes that there are many Muslims in the Federal capital who would immensely benefit from the publication which bears the sole aim of educating Muslims about Islam.

“Coming to Abuja will also open the doors of so many opportunities, especially in the areas of sponsorship and advertisement” he admonished me on that faithful dinner night, one of the activities of the Convention meant to rewards Muslim Achievers, held at Sheraton Hotel, Lagos, Southwest, Nigeria.

Though I haven’t spoken with Senator Barkiya since our first meeting in December, I always remember his advice and I pledged to myself that we shall make it to Abuja one day.

So, when the opportunity to go to Abuja came up, meeting him was one of my top priorities. But how do I meet a Senator whose number hasn’t been going through since the day he collected my number and beeped me with his? Of course, that was his regular number he called me with. In fact, to easily remember me, we both deliberated and agreed on the name he would use to save my number. So we agreed on Rasheed, Lagos Muslim Journalist.

Since then, his number hasn’t been going through, yet I was confident and determined that I would surely meet him before leaving Abuja even as some of my colleagues had already advised me saying;

“If you don’t have an appointment with the Senator or any Nigerian politician, don’t bother visiting them. If they want you, let them give you an appointment, book your hotel and pay for your flight.”

His selfless attributes reflected when the crew of about 3 men and I were delayed at the National Assembly entrance because we had no tags to enter the premises other than our official ID cards. I put a call through to him once, he picked and asked me to put the phone on speaker, but the security personnel wouldn’t want to listen.

“Let him come himself to clear you,” one of the officials told us.

While still contemplating our next move, whether to stay back or return to our base, Senator Kabir sent his Personal Assistant despite his tight schedule, to come over and clear our team before we were allowed into the premises.

“At last, we made it inside, AlhamduliLlah”, a member of my crew said. One would think we had just won a ticket to paradise. As we entered his office with smiling faces, we heard a call to prayer from his main expansive office. It was past 4 already, time for Asr. As we performed ablution and joined the small congregation of some of his closest officials. Senator Kabir led us in Salat right inside his office.

He is indeed one of the few Muslim lawmakers at the National Assembly who doesn’t conceal his identity. Being a devout Muslim, Engr. Kabir, who was sworn in as a Senator in 2019, is determined to serve his Constituency and committed to delivering dividends of democracy to all Nigerians through his position as the Vice Chairman, House Committee on FERMA.

“Thank you sir for hosting us, despite the short notice. We are indeed very grateful. But sir, why do you think some of your colleagues hide their identities as Muslims?”, I asked him, immediately after the Salat. 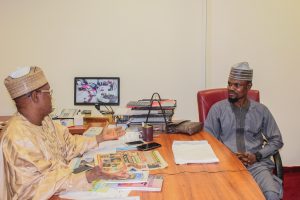 “In the name of Allah, the most gracious, the most merciful. Let me first welcome you to Abuja particularly my office here at the National Assembly”, he responded, adding that, “To start with your question, I don’t believe that a good Muslim, irrespective of his occupation or portfolio, should hide his or her religious identity.”

“Whether he is a lawmaker or not, because he is supposed to go to work with his faith and exhibit the exemplary characters of the Prophet (SAW). As Muslims, wherever we go, we must let people see Islam in our actions even before we start preaching to them.

“Likewise, a good Muslim cannot hide his religion because when it is time for the five daily salat (prayer), as we just did (referring to the congregational Asr observed with the MN Team), no matter what he is doing, he will surely observe it. That is the primary reason Allah created us. Allah said, He hasn’t created men and jinns except that we worship him (quoting from the Quran 51: 56). My advice is that we should not hide our religious identity,” he added.

Watch out for the full interview in the March/April 2020 edition of Muslim News. Consider a kind donation to support our ideal Islamic ethical journalistic effort. Donate HERE