The series, which caused controversy among some viewers when it debuted in January, has not been renewed for a second season

TV thriller Messiah has been cancelled by Netflix after just one season.

The series starred Michelle Monaghan as a CIA agent investigating an enigmatic figure known as Al-Masih, who builds a legion of followers after claiming to be sent to Earth by a higher power.

In Islamic eschatology, Al-Masih ad-Dajjal is an evil figure comparable to the Antichrist – whose name translates to “the false messiah, liar, the deceiver” in Arabic. 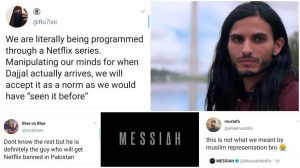 One of the series’ stars, Wil Traval, confirmed on Instagram that the series would not be returning to the streaming service.

“It’s a very sad day today,” he wrote. “I have just recieved news from Netflix that there will be no season two of Messiah.”

After the first season debuted in January, there were complaints that the series contained subtextual anti-Islamic sentiment, with the Royal Film Commission of Jordan (where parts of the series were shot), even calling on Netflix to ban the series from its country.

In a statement, Netflix said: “Messiah is a work of fiction. It is not based on any one character, figure or religion. All Netflix shows feature ratings and information to help members make their own decisions about what’s right for them and their families.”

While the allegations of religious insensitivity may have played a part in the series’ cancellation, it has also been suggested that the ongoing coronavirus pandemic has made international filming schedules much harder to co-ordinate – which may be the key factor in the streaming service’s decision not to renew .