Ertuğrul: Kayis’ army’s route to justice and the reawakening of Islamic Caliphacy, by Rasheed Abubakar

The Kayis Muslim army who dealt with the Knight Templars (the Crusader infidels) and razed down their castle in the 70th episode of the 1st season of Diriliş Ertuğrul (English subtitle) were lesser in number but their reliance on Allah gave them sweet victory despite betrayal, lies and evil machinations from among their kinsmen.

When they found there wasn’t a way, they didn’t give up. Instead, they called on Allah and He (the Almighty) didn’t forsake them.

The lead actor, Ertuğrul (Engin Altan Duzyatan)  was heard saying angrily, ‘There must be a way to enter this castle. We must find the second tunnel some way…”, after it became obvious that the first tunnel led to nowhere.

But his father, Sulayman Shah (real name, Serdar Gökhan), admonished him, saying, “Do not give rein to anger, it is Allah who grants victory. If we are destined to conquer, no one can stand in our way…”

The moment finally came, Allah showed them the way through a brave lad, Shahzade Yiğit (Burak Temiz), and the Kayis Muslims entered the Crusaders’ Castle through the second tunnel and defeated the infidels at home.

The episode 70, if anyone asks me, is the climax and the beginning of the end of the ‘Diriliş Ertuğrul’, the full title of the Turkish TV series, session 1, meaning, ‘Resurrection Ertuğrul’. But the death of Sulayman Shah, in the last episode 76 of the season 1 was heart-wrenching.

I shed tears watching a great man who stood for justice, fairness and had executed many battles against oppressions successfully, drowning and his two brave sons, Ertuğrul and Gundogdu ( real name Kaan Taşaner) couldn’t save him. As Muslims, it shows that our life and death is in Allah’s hand and He (SWT) can give and take it anytime, anywhere.

But then, I begin to wonder after ending the season 1; does the Muslim ummah have a fortified army like that of the Kayis Muslims? Are they more devoted and committed to unite the Muslim world and conquer Jerusalem (Masjid Al-Aqsa in Palestine) from the apartheid Zionist regime and shame their supporters?

Does the Ummah have Muslims who are ready to champion the revival of Islamic caliphacy where peace, justice and love will once again reign as they did during the Othoman Empire?

I am not talking about the groups of brainwashed criminals of Boko Haram, Daesh, etc who lied about fighting holy war and thus killed innocent people, including Muslims indiscriminately. I am referring to the Kayis Muslims, the descendants of Prophet Ibrahim (AS) and the true followers of Prophet Muhammad (SAW).

Evidently, there is no unified Muslim army in today’s world. The ummah has been divided into small countries with their leaders protecting their own territories and interests. Today, it is so bad that the Muslim world doesn’t care about the plight of their brethren in Palestine, Rohingya and of recent, Uighurs in China.

The Muslim population is huge – about 1.8 billions in the world. The Organisation of Islamic Cooperation (OIC), which was established in 1969 following the criminal arson of al-Aqsa Mosque in occupied Jerusalem, is the second largest inter-governmental organisation after the United Nations with a membership of 57 states across four continents. Yet, the body cannot defend and protect Masjid Al-Aqsa from the apartheid Israeli regime. 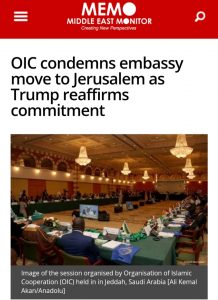 Right in our face, An Israeli nation of about 9 million forcefully and illegally relocated its embassy from Tel-Aviv to Jerusalem in 2017 and the OIC couldn’t stop her except writing series of press release to condemn the development. How many are the Israeli soldiers if the OIC could unite militarily and form the world’s largest Muslim army?

Findings showed that there are 160,000 active soldiers in Israel’s forces, and their defense budget is $15.6 billion. But a united Muslim army under OIC would assemble over 5 million forces with defense budget of approximately $175 billion. Interestingly, many of these OIC member countries surround Israel geographically and such, it would be easy to defeat her, the same way the Kayis defeated the Crusaders, and liberate Palestine.

READ ALSO...  74 years after Hiroshima: Has the world learnt its lessons?

But it is part of the enemies’ grand plot to continue seeing Muslims divided. Haven’t they succeeded? Look around the Muslim world today, What do you see? Muslims shedding Muslims’ blood with the support of their enemies (allies) who wanted them divided. They surrender their brothers to the tyrants for the ephemeral world. 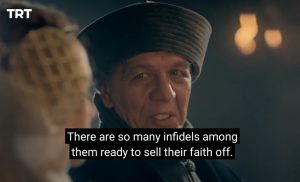 Today, there are many infidels and hypocrites among the Muslims who are ready to sell their faith off.

Because of power and love of this world, Muslim leaders are now forming an unholy alliance with the enemies of their religion, the same way the Crusaders promised to support Halime’s father, Shahzade to become the Seljuk Sultan if he had accepted to be their ally. If Afsin Bey didn’t kill him, he would have become a slave of the Pope, like many so called Muslim leaders romancing and becoming the slaves of the west.

Interestingly, I got to know about Diriliş Ertuğrul for the first time when it was banned few days ago by the Egypt’s Dâru’l-İftâ, the official and biggest fatwa organ of the country. 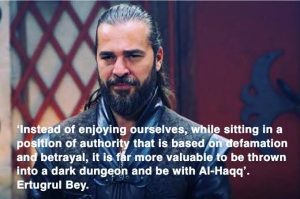 Further findings showed that the TV series was taken off air in 2018 in Saudi Arabia and United Arab Emirates (UAE) by the Dubai-based Saudi media group, MBC (Middle East Broadcasting Center), based on the allegation that Turkey is trying to “create an ‘area of influence’ for itself in the Middle East via its soft power.”

The statement was also targeted at the Muslim News Global Personality of the Year 2018 and 2019, President Recep Tayyip Erdoğan alleging that Erdoğan aims to revive the Ottoman Empire in the Middle East and regain sovereignty over Arab countries which were previously under Ottoman rule.

Does it really matter if the Turks plan to unite the Muslim world again? Haven’t their forefathers made us proud before? Sulayman Shah’s son, Ertuğrul, started the unification before his son, Osman continued and established the Ottoman Empire which began in the 13th century. The Turks ruled for 600 years and established justice and fairness under the Islamic power before it was brought to an end in 1922.

Diriliş Ertuğrul is an interesting epic drama series and I must say, I enjoyed every episode (from 1 to 76) of the season 1. I have learnt a lot since I started watching it, especially the need for the Muslim world to, as a matter of urgency, come together to establish justice and fairness in the land.

But the question is, did the film end well with the demise of Sulayman Shah? What would happen to the Kayis as they begin another journey for the resurrection of Anatolia? Would Ertuğrul and his brave Alps be able to stop the Mongols bandits the same way they dealt with The Crusaders? Would they be able to rewrite history?

Season 2 has the answers.

Rasheed Abubakar is the publisher of Muslim News